With the support of Turkey, a Syrian soccer tournament is being broadcast live on the internet, pushing many to follow the games, and advancing the sports sector in the area. 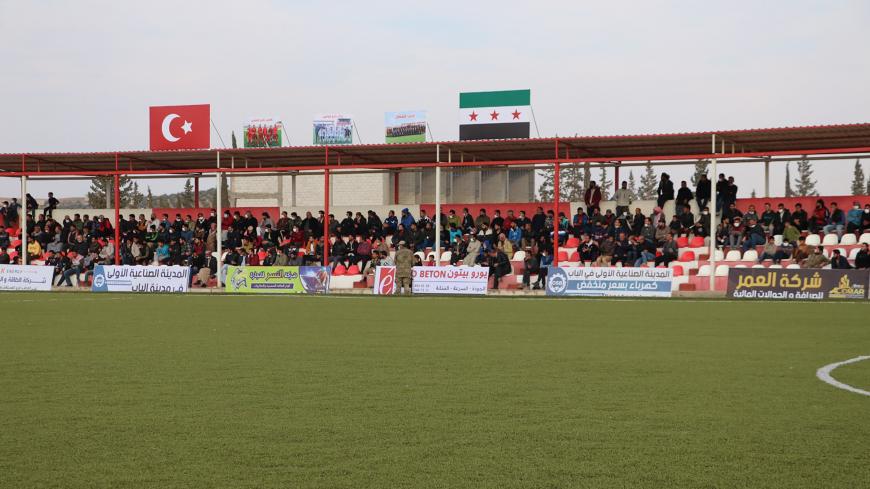 After the Islamic State was expelled from the area in 2017, the Turkish government began overseeing the sports sector there in cooperation with local councils.

The tournament is a result of coordination between the local councils of al-Bab, Qabasin and B’zaah and the Qasioun news agency, a Syrian independent media institution based in Turkey. The agency is livestreaming the games on its Facebook page and YouTube channel, a first in northern Syria since the Syrian regime lost control over the area in 2013.

Sports events in other parts of Syria are broadcast live on television, but the regime and its affiliated TV broadcasting system are behind the times and are unable to match the quality of the broadcasts or quantity of the cameras used for the northern Syria tournament. The Qasioun news agency has provided eight cameras, a mobile studio and a sports commentator for the Northern Syrian Football tournament.

The director of sports and youth affairs for al-Bab's local council, Jumaa al-Haj Hamdo, told Al-Monitor that such a tournament was first suggested in 2018 during a meeting of the local councils' sports officials. The meeting resulted in the launching of a 27-club league that competed in qualifying games that ended in 2019; 12 clubs qualified for the first division and 15 for the second division. Both divisions are now participating in the tournament.

Hamdo said that the live broadcasts help promote sports in the area and added that the clubs have started to fully assume their responsibilities when it comes to their equipment, uniforms and uniform logos. This, according to Hamdo, has encouraged more and more Syrians at home and abroad to be interested in the games.

Yasar Kamal, director of the Qasioun news agency in Gaziantep, told Al-Monitor that the broadcasts of tournament games came in response to the local councils’ call and because of Syrians’ interest in sports, particularly soccer. He added that positive comments on the teams' social media pages and the agency’s website, and reviews that compared the agency’s broadcasts with regime ones — in terms of image, broadcast and commentator quality — have pushed the agency to continue broadcasting the games until the end of the tournament.

The internet connections provided in the area by Turkcell and Turk Telekom are good, and residents can rewatch games posted on social media pages.

Yasar said the live broadcast crew consists of cameramen and a sports commentator, and involves five to eight cameras. He said the crew arrives at the stadium three or four hours ahead of kickoff, installs the cameras in the right spots and conducts a technical rehearsal. Once a game is over, the crew usually returns the equipment and tools back to the agency’s office across the border in Gaziantep, Turkey, he said. Gaziantep is about 130 kilometers (80 miles) from al-Bab.

Yasar mentioned some obstacles, such as the lack of advertisements that would cover the broadcast cost. He said merchants may not be encouraged to be involved in this experience, especially in light of the coronavirus pandemic. “We did not obtain what would cover the expenses, but presently, we won a bigger and more important thing, which is the audience’s affection, their follow-up and encouragement for us to continue to broadcast live.”

In the games involving the second division, teams that have already qualified to join the first division next season are the Douma, Souqour al-Furat and al-Mayadeen clubs. Meanwhile, the al-Bab, Qabasin, B’azaah, Jarablus and al-Karama clubs are in the running for the first division tournament championship.

Raghdan Shehadeh, a Syrian soccer player who played for Al-Jaish Sports Club and Al-Fatwa club, and who is currently the coach of B’zaah club, said the broadcasts “allow the player to watch his performance once the game is over, and will allow us, the coaches, to evaluate where we are and the mistakes we made. It is very beautiful to see the player happily telling his friends that he will play a game that will be broadcast live. That motivates high performance.”

Mahmoud Shibli, who played for Al-Ittihad and Police soccer clubs and who currently plays for the Qabasin club, told Al-Monitor, “I feel pride and motivation to give my very best along with my teammates when we play, particularly with the media live broadcast and interest and good sports infrastructure. I played on other soccer clubs and competitions before the revolution; they were strong and recognized, but they did not get such media, organizational and administrative attention. Now, in this and future competitions, we will witness a quality image and performance going hand in hand.”

He added, “It has become necessary to have a sports umbrella that regulates the clubs’ work and competitions in all areas under the control of the revolution [opposition], with the goal of a stronger soccer league and clearer clubs' licensing following strong regulations. We always aspire for more development so that the competition intensifies, and sports and life resume in our areas with the cooperation of all parties.”

Al-Monitor toured the venues, took photos and interviewed people following the games. Fans were generally positive and said they had a strong desire to watch soccer broadcasts.

Soccer also is being played in other parts of Syria outside regime control. In recent weeks, games were played in Raqqa in the area under the control of the Kurdish-led Syrian Democratic Forces and in Idlib, which is controlled by Hayat Tahrir al-Sham. These games were not broadcast live. And in regime-controlled Aleppo, the live broadcast of games involved just one or two cameras, unlike those using multiple cameras in and around al-Bab. 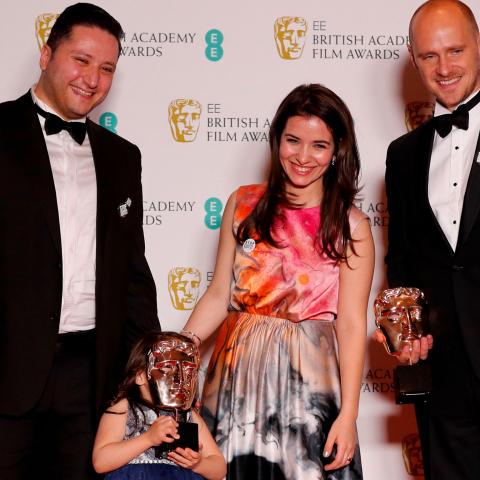 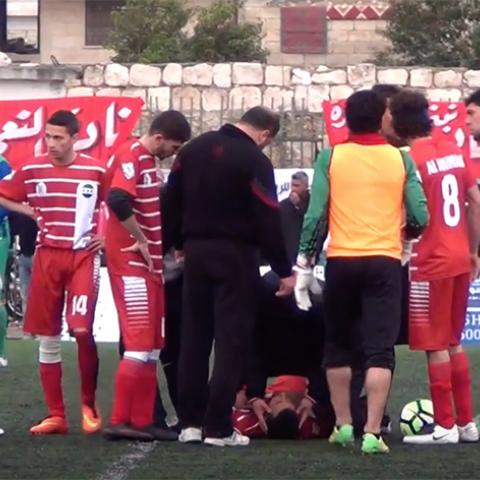