'How Does a Detonator Work?' Portland man indicted for publishing Islamic State newsletter 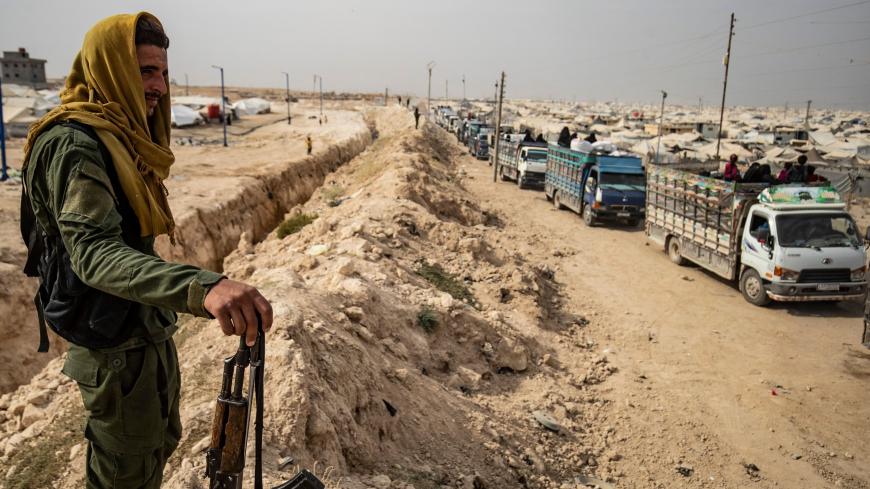 A Kurdish fighter looks on as a convoy of trucks transporting Syrian women and children suspected of being related to Islamic State fighters leaves the Kurdish-run al-Hol camp after being released to return to their homes, in Hasakah province in northeastern Syria, on Oct. 28, 2020. - DELIL SOULEIMAN/AFP via Getty Images

Federal prosecutors in Portland, Oregon, announced the indictment of a local man accused of creating and disseminating propaganda encouraging violence on behalf of the Islamic State.

Hawazen Sameer Mothafar, 31, appeared in court Thursday, but was not detained because he is wheelchair-bound. The court placed restrictions on his travel and use of electronic devices.

Mothafar is accused of coordinating with Islamic State media personnel abroad since 2015, and more recently of creating, editing and publishing editions of an online pro-IS newspaper, which included articles titled “Effective Stabbing Techniques” and “How Does a Detonator Work?”

He also solicited an editorial from Saleck Ould Cheikh Mohamedou, an al-Qaeda operative facing a death sentence in Mauritania after being convicted of attempting to assassinate the country’s president. Mohamedou is also believed to have been behind a 2007 murder of four French tourists, according to the US State Department.

Mohamedou’s article was not the first allegedly published by Mothafar encouraging violent jihad, prosecutors said. In June 2018 he allegedly released an article urging readers to stage attacks in their home countries if they were unable to travel to Syria or Iraq to join the so-called caliphate in person.

Mothafar is also accused of moderating IS social media channels, as well as setting up an email and a social media account for IS officials abroad. Prosecutors allege he pledged his allegiance to IS last year. His indictment did not indicate he traveled abroad on behalf of the jihadi organization.

The US Justice Department announced last month it had repatriated the last of 27 surviving Americans who traveled abroad to joined the Islamic State.

The US-led international military coalition against IS, along with local Kurdish-led militias on the ground, captured the so-called caliphate’s final territorial holdout in March 2019.