Six companies and four people were blacklisted by the Treasury Department on Tuesday. 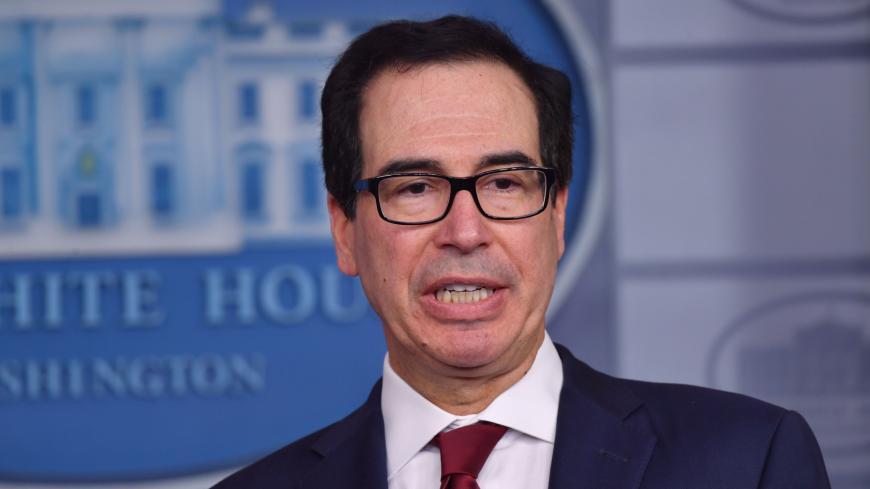 US Treasury Secretary Steven Mnuchin announces new sanctions on Iran, at the White House in Washington, on Jan. 10, 2020. - NICHOLAS KAMM/AFP via Getty Images

The Trump administration on Tuesday imposed a new round of sanctions targeting Iran, blacklisting six companies and four people accused of facilitating the procurement of sensitive goods for an Iranian military firm.

“The Iranian regime utilizes a global network of companies to advance its destabilizing military capabilities,” Treasury Secretary Steven Mnuchin said in a statement. “The United States will continue to take action against those who help to support the regime’s militarization and proliferation efforts.”

Iran Communication Industries, which was already sanctioned by both the United States and European Union, produces military communication systems, avionics, information technology, electronic warfare and missile launchers, according to the Treasury. The department accused a number of companies based in Iran, Hong Kong, China and Brunei of facilitating the transaction of US-origin electronic components and other goods on behalf of Iran Communication Industries.

In addition, a Taiwanese individual and international organizations DES International and Soltech — all blacklisted Tuesday — were charged in the US District Court for the District of Columbia with criminal conspiracy to violate Iran sanctions.

“The defendants are charged with conspiring to violate American sanctions on Iran by buying goods from the United States, concealing the origin of those goods and sending them to Iran for use by the government and business,” Assistant Attorney General for National Security John Demers said in a statement.

“Violations of the sanctions diminish their effectiveness and delay the day when Iran will cease its belligerent activity,” he added.

The sanctions came as Trump’s special envoy for Iran, Elliott Abrams, told reporters during a visit to Israel that the administration would keep up its maximum pressure campaign against Iran through the transition. On Sunday, Axios reported that the Trump administration is planning to slap as many sanctions as possible on Iran before leaving office, making it that much harder for Biden to salvage the Iranian nuclear deal.

The president-elect has pledged that if Iran returns to strict compliance, he would rejoin the 2015 landmark nuclear agreement as a starting point for negotiations. Trump withdrew the United States from the pact in 2018 and reimposed tough international sanctions on the Islamic Republic.

According to a report from Reuters, the Trump administration is readying another round of sanctions against Iranians who played a role in the violent suppression of anti-government protests in November 2019. The unrest in Iran left hundreds dead, marking the country’s deadliest uprising since the Islamic Revolution in 1979.