Karim Ennarah is the third member of the Egyptian Initiative for Personal Rights to be detained this year. 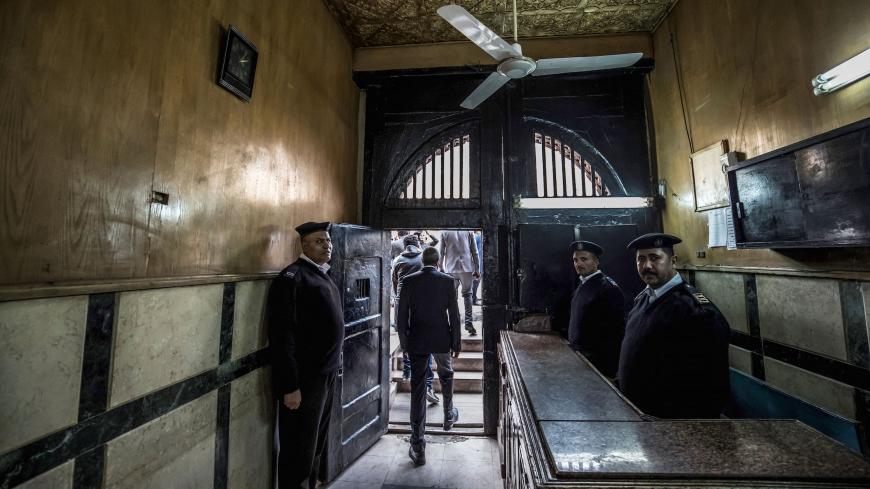 A picture taken during a guided tour organized by Egypt's State Information Service on Feb. 11, 2020, shows Egyptian police officers at the entrance of the Tora prison in the Egyptian capital Cairo. - KHALED DESOUKI/AFP via Getty Images

Egyptian intelligence officers have arrested a second member of one of the country’s most prominent human rights groups this week, after detaining the organization’s administrative manager from his home in Cairo on Tuesday.

Security forces initially looked for Ennarah at his home in Cairo on Tuesday. He was later found at a beach in Dahab and taken to the local police station.

On Tuesday, an administrative director at EIPR, Mohamed Bashir, was taken from his home after midnight by security officials. He was detained for 12 hours before being referred to a trial that includes journalists and other human rights professionals on allegations of terrorism.

The arrests came after EIPR hosted more than a dozen European diplomats and ambassadors in Cairo to discuss human rights issues in Egypt earlier this month. The visit included representatives from Canada, Germany, France, Italy and other European countries. Bashir's lawyers said he was questioned specifically about the visit.

Just prior to Ennarah’s arrest on Wednesday, Egypt’s Youm7 and Sawt al-Umma published articles accusing EIPR of plotting against Egypt’s national security and its reputation abroad. Both outlets are linked with Egypt’s intelligence apparatus.

Amnesty International condemned the arrests. “These arrests represent a heavy blow to the legitimate work carried out by human rights defenders in Egypt,” Amnesty said in a statement.

Another EIPR researcher, Patrick George Zaki, remains in detention since being arrested in February.

This week’s arrests come a month after more than 50 members of the US Congress and more than 200 EU lawmakers penned letters to Egyptian President Abdel Fattah al-Sisi urging him to release imprisoned activists, journalists and lawyers.

The Egyptian regime has arrested tens of thousands of people since Sisi came to power after leading a coup against the previous president, Mohammed Morsi, in 2013, rights organizations say. Sisi's regime has become known for forcible disappearances and intimidating citizens who are publicly critical of the government.

France’s Foreign Ministry expressed “deep concern” over Bashir’s arrest but did not outright condemn it.

US Secretary of State Mike Pompeo is currently on a diplomatic tour of the Middle East but is not scheduled to stop in Cairo. Amid pushback from Congress, the Donald Trump administration has done little to acknowledge the Sisi regime’s domestic repression, despite having negotiated the release of dual US citizens.