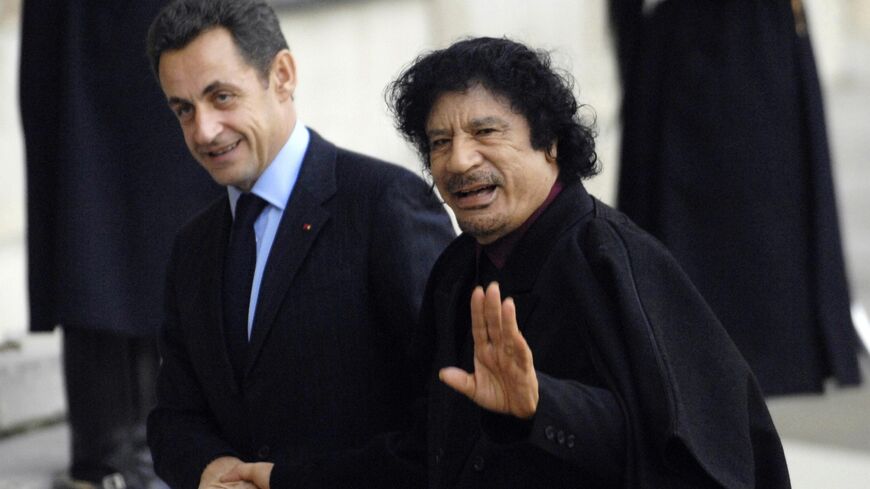 French President Nicolas Sarkozy (L) greets Libyan leader Moammar Gadhafi on Dec. 12, 2007, at the Elysee Palace in Paris. Sarkozy came under renewed pressure ahead of the meeting as the opposition charged he had fallen into a "trap" by inviting the Libyan leader to Paris.

Former French President Nicolas Sarkozy is facing a new charge as part of an inquiry into allegations he funded his successful 2007 campaign with cash supplied by the regime of former Libyan dictator Moammar Gadhafi.

Prosecutors today charged the 65-year-old Sarkozy with “membership in a criminal conspiracy,” adding to existing charges from 2018 of “passive corruption,” “benefiting from embezzled public funds” and “illegal campaign financing.”

Prosecutors are investigating whether Sarkozy’s presidential campaign was bankrolled by Gadhafi, whom the French leader controversially invited for a state visit after Sarkozy's election in 2007. The Libyan dictator was then toppled and killed in 2011 following a NATO-backed uprising that France helped lead.

French law requires “serious or consistent evidence” before placing someone under formal investigation. Last month, a Paris appeals court threw out Sarkozy’s appeal, paving the way for him to stand trial.

Sarkozy, who was president from 2007 to 2012, has long denied taking money from the slain Libyan leader. He wrote on his Facebook page today that “the truth will eventually triumph.”

The long-running investigation stems from claims made by Gadhafi’s son in 2011. In an interview with Euronews TV, Saif al-Islam Gadhafi said he had proof of bank transfers to Sarkozy and demanded the former French president hand over the money to “the Libyan people.”

The following year, French investigative outlet Mediapart published documents that appeared to detail the regime’s approval of a transaction of 50 million euros.

The accusations were given more weight in 2016 when French-Lebanese businessman Ziad Takieddine said he personally facilitated money transfers between Tripoli and Paris, delivering three suitcases-worth of cash to Sarkozy's campaign director in 2006 and 2007.

The Libya investigation is one of several legal woes facing the former French president. Sarkozy is under investigation for influence peddling, as well as accusations he used fake invoices to hide that his failed 2012 campaign had exceeded legal spending limits.