Oil tanker sanctioned by US, later found off Iran was hijacked, says captain

A missing crude oil tanker subject to US government sanctions over alleged involvement in Iran’s oil exportation was hijacked, according to the ship’s captain. 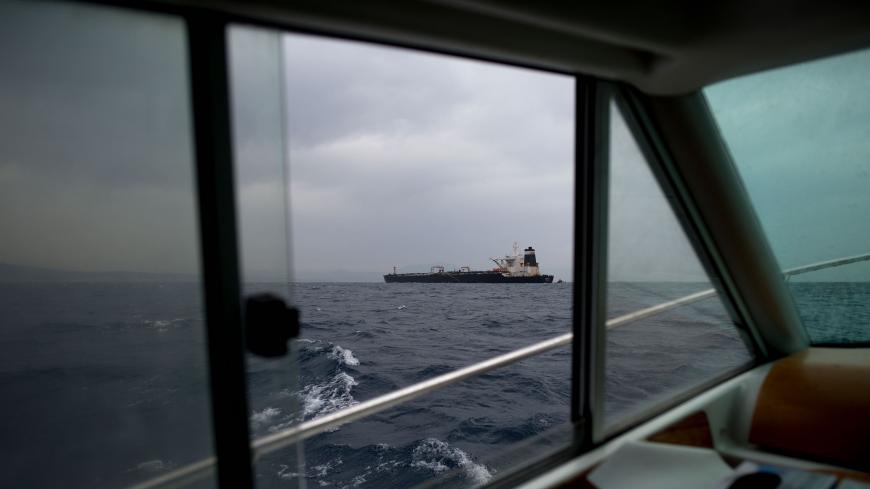 A picture shows Iranian supertanker Grace 1 off the coast of Gibraltar, where the UK had detained it, on July 6, 2019. - JORGE GUERRERO/AFP via Getty Images

A missing crude oil tanker subject to US government sanctions over alleged involvement in Iran’s oil exportation was hijacked, according to the ship’s captain.

The MT Gulf Sky, which has been based in the United Arab Emirates for months, stopped transmitting its location on July 5. The Dominica-flagged ship was then spotted on satellite imagery just a few miles off Iran’s coast near Hormuz Island on Tuesday by TankerTrackers, a website that monitors maritime oil trade, the Associated Press first reported.

The ship’s captain told the UK-based NGO Human Rights at Sea (HRS) that two of the ship’s crew members are in currently Tehran, according to AP. Twenty-six other members of the Indian crew returned to India, said HRS CEO David Hammond.

The vessel had previously been based at Khorfakkan on the UAE’s east coast after it was seized by local authorities due to a civil action suit by its Greece-based seller because a US bank froze the funds used to transfer the ship two Iranian buyers.

In May, the US Justice Department unsealed criminal charges against two Iranians accused of laundering some $12 million via Wells Fargo Bank to purchase the ship, then called the Nautic. The buyers purchased the ship from Crystal Holdings, a subsidiary of the Greece-based Polembros Shipping company in September 2019, the Wall Street Journal reported.

US prosecutors accused Amir Dianat and Kamran Lajmiri of attempting to purchase the vessel in coordination with the US-sanctioned National Iranian Oil Company, the National Iranian Tanker Company and the Quds Force of Iran’s Islamic Revolutionary Guard Corps, which the United States considers a terrorist organization.

An attorney for the seller of the ship denied the Greece-based company was aware of the pair’s plans. The company was also not named in the Justice Department allegations. Crystal Holdings later filed the civil action suit in hope of reclaiming the vessel after not receiving payment. It was not immediately clear how the ship was permitted to leave the UAE.

The ship’s crew were reportedly “stuck” on board for months without pay after its Iranian owners “abandoned” the Gulf Sky and its crew in March of this year, the International Labor Organization said.

In May, the United States announced sanctions against Dianat, who also holds an Iraqi passport, accusing him of smuggling weapons for the IRGC. The US Treasury Department said Dianat founded Taif Mining Services, LLC as a way to purchase the Nautic, and that he is a “longtime associate” of senior IRGC officials.

The US Navy did not immediately respond to a request for comment.