The United Arab Emirates will hold the isolated UFC event on Yas Island with health precautions in place, as the combat sport continues to grow in the Middle East. 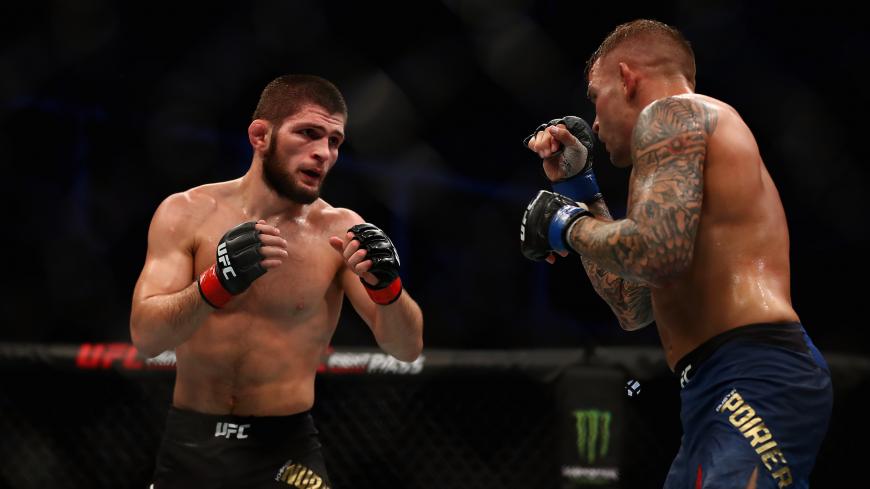 Khabib Nurmagomedov of Russia competes against Dustin Poirier of United States in their Lightweight Title Bout during the UFC 242 event at The Arena on Sept. 7, 2019, in Abu Dhabi, United Arab Emirates. - Francois Nel/Getty Images

MMA is a combat sport where men and women fight in a cage for a series of timed rounds or until someone is knocked out or surrenders. The sport draws on various types of martial arts, including wrestling and striking-based forms. MMA has grown in the Middle East in recent years. One draw for Middle Eastern fans is Khabib Nurmagomedov, a devout and outspoken Muslim from the autonomous Dagestan area of Russia. Last September, the still undefeated Nurmagomedov beat American Justin Poirier in a highly watched bout in Abu Dhabi.

The “Fight Island” series will continue the Emirates’ connection to the sport. UFC leaders expressed a willingness to continue having fights at relatively isolated locations with health precautions in place due to the coronavirus pandemic. On Monday, authorities completed preparation for the series, Emirates News Agency said.

An 11-kilometer (7-mile) stretch of the island northeast of central Abu Dhabi will host four UFC events beginning Sunday morning local time. More than 2,500 people will be able to attend. There will be an Arabic-language broadcast of the fights, according to Emirates News Agency. The first event will be headlined by a match between Nigerian-born American fighter Kamaru Usman and fellow American Jorge Masvidal.

Both players are undergoing a series of coronavirus tests in the lead up to the fight. Relatedly, Nurmagomedov’s father Abdulmanap died on Friday due to complications from the virus. The elder Nurmagomedov was his son’s coach and a mentor to many fighters from Dagestan.

The Emirates is showing a desire to resume sports as it emerges from its virus-related lockdown. Late last month, the country ended its monthslong curfew, which was one of the strictest in the region at times. Camel racing will resume this month.

“It signals our readiness to once again host international events,” Ali Al Shaiba, executive director of tourism and marketing for the Department of Culture and Tourism, told Emirates News Agency.

The indoor arena will be subject to a deep cleaning daily to mitigate the spread of the virus during the fights, according to the agency.