Northeast Syrian women to participate in meetings on tribal matters

Some women in the autonomous, Kurdish-led statelet welcome the move. 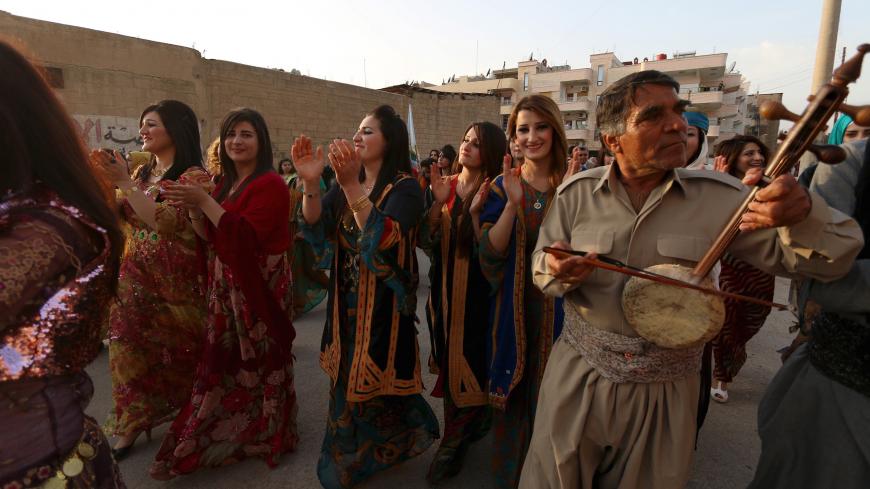 Women in northeast Syria are now allowed to participate in social meetings pertaining to political and tribal matters.

One female Syriac Christian official in the Autonomous Administration of North and East Syria that governs the area welcomed the new move, saying it counters centuries of women being sidelined in the region.

“In the Middle East, women are only at home and men have bigger roles,” Elizabeth Gawryie, a deputy of the administration’s Executive Council, told Al-Monitor. “But women must have equality and rights.”

Last week, Syrian Kurdish leader Ilham Ahmed tweeted that women would be allowed to participate in the meetings known as “al-madhafah.” Ahmed is the president of the Executive Committee in the Syrian Democratic Council. The council is the political wing of the Syrian Democratic Forces (SDF), a US-backed group that controls the statelet in northeast Syria. The forces are led by Kurds, but include an array of Christian and Arab groups as well.

The gatherings Ahmed spoke about are of local male leaders who discuss political matters. Parts of northeast Syria have prominent tribes who wield significant influence over the community. Their role is important in northeast Syria because the SDF often negotiates with the tribes, which are politically divided.

Some women in northeast Syria feel empowered by the news. Gawryie said she is optimistic women will have a greater say in political matters now. “Our goal is for women to be participants, especially in politics,” she added.

Women already have relative freedom in northeast Syria, according to Gawryie. She pointed to the role of women in Syriac military groups, for example. (The Syrian government only requires men to serve in the military and Syrian rebel groups consist solely of male fighters.)

Northeast Syria has a degree of equality in general already, she said, also noting the availability of education in Kurdish, Arabic and Syriac — a form of Aramaic spoken by Christians.

“We — along with Kurds and Arabs — have built an administration with general rights for society,” Gawryie said. “There are equal rights and duties. There are rights for Arabic, Kurdish and Syriac languages.”

Women Defend Rojava is a campaign that supports women in northeast Syria, which the Kurds refer to as Rojava. Stera Abdo, spokeswoman for the movement, agreed with Gawryie that women already have a say in politics in northeast Syria. Many institutions in northeast Syria have dual leaders allowing for a man and a woman to lead them. There is also a 40% gender quota for all institutions and organizations in the autonomous administration, she told Al-Monitor.

Women were already discussing politics with tribes, making their formal participation in al-madhafah meetings a logical development, according to Abdo. “We can imagine that the thinking of the tribes is slowly changing. The tribal leaders are already sitting around a table with female politicians and discussing, so it is just another step that women from the tribes get involved.”

There are some issues facing women in northeast Syria inside and out of SDF territory. Last year, Human Rights Watch reported that Islamic State-affiliated women cannot leave the SDF-controlled al-Hol camp except for emergencies. The SDF fears residents could rebel in the camp, and many are still loyal to IS. The SDF has repeatedly called on countries to take back their citizens there.

Recently, there have been several kidnappings of women in Afrin, which Turkish-backed Syrian rebel groups took from the SDF in 2018. In a discussion with reporters last week, Ahmed also said that the Syrian Democratic Council is aware of the issue of abuse of women during the coronavirus lockdown in northeast Syria. “In the context of the coronavirus, we are trying to engage in a research effort on the implications for women during the pandemic regarding violence against women,” she noted.

Rising violence against women during the virus-related lockdown is a problem throughout the Middle East and the world.

The council is working to help people speak out on the topic, according to Ahmed. “In Middle Eastern society in general, people are less likely to talk,” she added. “I can say people have opened up who wouldn’t have previously."