The US military issues six Purple Hearts for service members who suffered brain injuries in January and plans to give out 23 more. 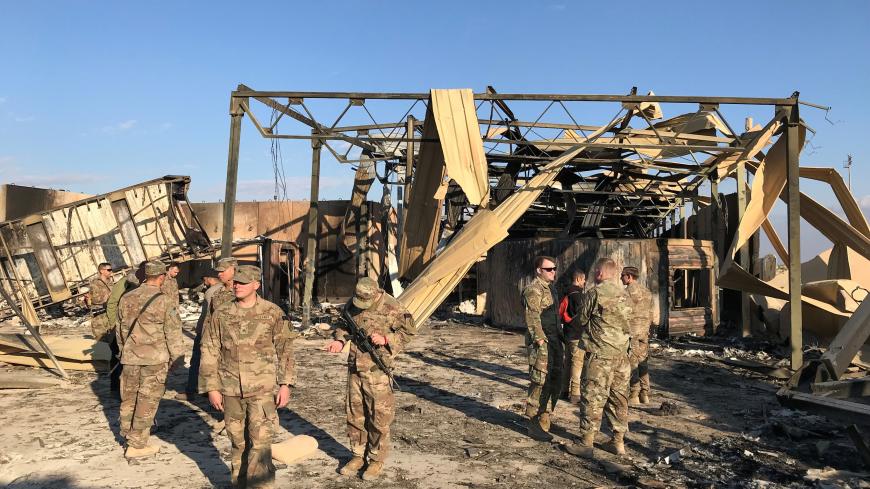 US soldiers inspect the site where an Iranian missile hit at Ain al-Asad air base, Jan. 13, 2020. - REUTERS/John Davison

Twenty-three more military personnel have been approved for the medal by the top US commander in Iraq, Lt. Gen. Pat White, Central Command announced today.

The first six medals were given to soldiers in Kuwait on Sunday and Monday, CENTCOM spokesperson Navy Capt. Bill Urban said. The remainder of the medals are set to be issued later this week.

The Purple Heart is the US military’s recognition that a service member has been wounded in combat.

The Defense Department has said 110 American personnel have so far been diagnosed with traumatic brain injuries as a result of a missile barrage by Iran’s government on Iraq’s Ain al-Assad and Erbil air bases in retaliation for the US killing of Iranian Quds Force commander Qasem Soleimani in January.

Some 80 military personnel were considered for the award as a result of the January missile barrage, Urban said today.

President Donald Trump initially downplayed the injuries as “not very serious.” Defense officials initially described the brain injury cases as “in the teens” before number of announced diagnoses rose rapidly in the weeks following the strikes.

The Pentagon said in January that more than a dozen ballistic missiles struck the air bases. Pentagon officials said at the time that the bombardment lasted for more than an hour as US military personnel took shelter.

Washington has since ordered Patriot missile and counter-rocket, artillery and mortar air defense batteries into Iraq to defend against future attacks.

The US military clarified its criteria for awarding Purple Hearts for concussive brain injuries in 2011.

Public awareness of the sometimes lifelong injury increased as American military personnel were exposed to improvised explosive devices during the conflicts in Iraq and Afghanistan.

In terms of concussion brain injuries, the US military requires them to have been suffered during action involving an adversary for them to qualify a service member for a Purple Heart.

The concussion also must be diagnosed by a medical doctor as severe enough to have required treatment, for the person to have been rendered unconscious or to have been deemed medically unfit for duty for at least 48 hours, the Navy said in 2011.