President Donald Trump laid into some of his close Senate allies for siding with Democrats on an Iran war powers bill even as Congress failed to override his veto. 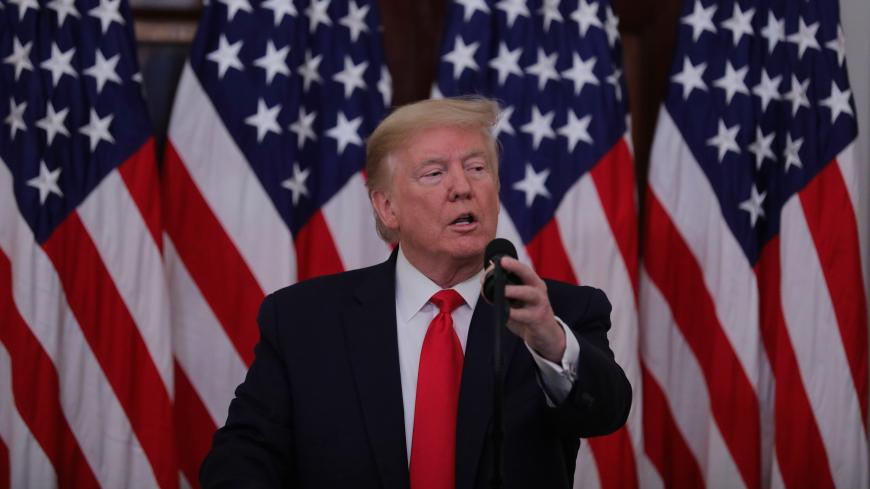 US President Donald Trump speaks during a coronavirus response event in the Blue Room at the White House in Washington, May 1, 2020. - REUTERS/Carlos Barria

The Senate today failed 49-44 to override President Donald Trump’s veto of a resolution to limit his ability to wage offensive military action against Iran. The vote came after Trump vetoed the resolution Wednesday. In the process, he blasted his fellow Republicans who sided with Democrats on the legislation.

“This was a very insulting resolution, introduced by Democrats as part of a strategy to win an election on Nov. 3 by dividing the Republican Party,” said Trump. “The few Republicans who voted for it played right into their hands.”

The Republican-held Senate first passed the resolution 55-45 in February as a rebuke of the US assassination of Iranian Maj. Gen. Qasem Soleimani in Iraq on Jan. 3, paving the way for a 227-186 vote in the House. Two Republicans joined Sens. Tim Kaine, D-Va., and Dick Durbin, D-Ill., as initial sponsors of the resolution: Sens. Rand Paul, R-Ky., and Mike Lee, R-Utah.

“Congress needed to stand up in a bipartisan way to make plain that this president should not get into a war with Iran — or any war — without the vote of Congress,” Kaine told reporters ahead of the vote. “This is not about the president: President Trump or any president. It’s about Congress, and that we should not be at war without a vote in Congress.”

The 1973 War Powers Act allows any lawmaker to force a vote directing the White House to end unauthorized hostilities abroad. While Congress has not voted to authorize military action against Iran, the Trump administration maintains that the strike on Soleimani was legal as a self-defense measure under the 2002 authorization to invade Iraq and Article 2 of the Constitution.

The Trump administration claimed after the Soleimani strike that the Iranian Quds Force commander had been planning an “imminent” attack on US assets in Iraq but has refused to declassify the evidence. However, Trump neglected that argument in his veto message. Instead he argued that the president’s Article 2 authorities allow him to take military action beyond imminent self-defense.

“The resolution implies that the president’s constitutional authority to use military force is limited to defense of the United States and its forces against imminent attack,” Trump said. “That is incorrect. We live in a hostile world of evolving threats, and the Constitution recognizes that the president must be able to anticipate our adversaries’ next moves and take swift and decisive action in response.”

The Constitution gives Congress the power to declare war. And the Vietnam-era War Powers Act states that the president may only introduce US forces into hostilities under congressional authorization or “a national emergency created by attack upon the United States, its territories or possessions or its armed forces.”

This is the seventh veto of Trump’s presidency, and the fifth concerning US military engagement in the Middle East.

The president vetoed three separate resolutions last year that would have blocked $8 billion in arms sales for Saudi Arabia and the United Arab Emirates, as well as a war powers resolution directing him to end support for the Saudi-led coalition fighting Yemen’s Iran-backed Houthi rebels. Congress failed to override those vetoes as well.

Kaine argued that congressional action on the Yemen war powers resolution prompted the Trump administration to end midair refueling for Saudi coalition warplanes in Yemen. He hopes that the Iran resolution will have a similar effect on Trump’s calculus despite his veto.

“I think he realized that there was a creeping mission that was getting the US closer to another war that we shouldn’t be in,” said Kaine. “And the congressional resolution, bipartisan, that landed on his desk, represented the collective wisdom of the Article 1 branch to listen to our voters that we don’t need another war in the Middle East right now. The president doesn’t care about Congress, but he does care about voters.”