Many Iraqi protesters have chosen to continue their demonstrations despite the rapid spread of the virus, saying the country's political crisis is more dangerous than the disease. 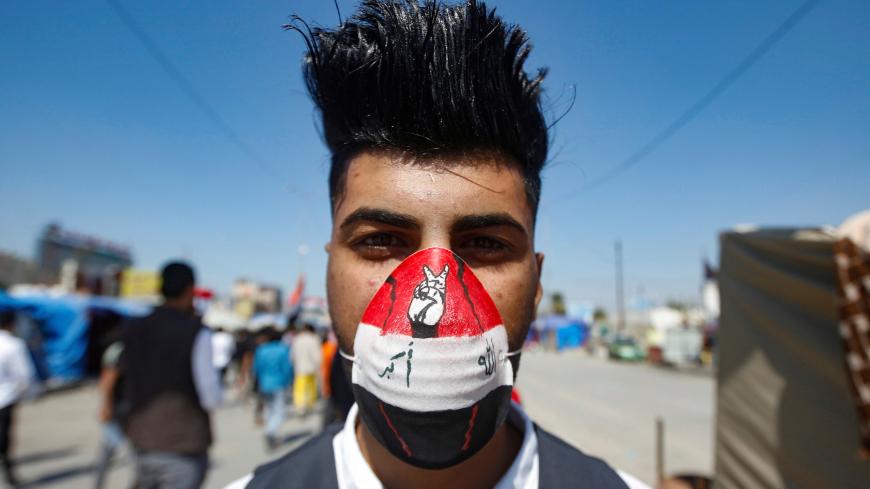 BAGHDAD — A group of protesters in Saadoun Tunnel under Tahrir Square in the center of Baghdad were chanting on Friday night, March. 6, calling on Coronavirus to come to Iraq and take revenge from the militias and corrupt politicians who killed them during the 5 months of protests.

"Listen to us Corona, come and visit the thieves who stole our wealth, come and take revenge from who stole our dreams, we only loved our homeland but they killed us," protesters were chanting.

Despite the rapid spread of the coronavirus in Iraq, protesters have maintained a steady presence in Baghdad's Tahrir Square and other public areas, with no sign of intent to retreat or scale back their demonstrations.

On March 5, hundreds of university students in Basra took part in a rally, chanting, “Politicians are the real virus,” “Corruption is the real virus” and “You are the corona,” in reference to the politicians the protesters accuse of being loyal to Iran instead of Iraq. Basra has been the site of several other rallies as well, demanding the border with Iran be closed after many cases of the virus were traced to people coming from Iran.

The Ministry of Health reported a third death from the coronavirus and three new cases of infection March 5, increasing the total number of people infected to 40. Most of the COVID-19 cases have been linked to neighboring Iran, where 107 people have died in the worst outbreak in the Middle East with a reported 3,500 infected.

In the southeast of the country next to Iran, the local Basra government has closed schools and universities in the province until the mid-March and is expected to extend the closures after that. The central government in Baghdad plans to implement the same measurements for the rest of Iraq and the Health Ministry ordered the closure of cafes, restaurants and cinemas to prevent the spread of the virus. Many religious institutions all over the county have canceled gatherings until further notice.

Despite all the precautions, the protesters who have been gathering in the squares and streets during the last five months in most of Iraq's central and southern cities are not staying home.

Not only are the protesters holding firm, but more people are joining their ranks. On March 1, as Mohammed Tawfiq Allawi missed the deadline to form his Cabinet, thousands of protesters from Dhi Qar, Wasit, Karbala, Najaf, Babil and other parts of southern Iraq joined the protesters in Baghdad and moved toward the Green Zone, where the parliament and most of the government buildings are located. Some of them are from Sunni areas such as Salahuddin, northern Baghdad, and Anbar province.

Activist Khalil al-Assadi from Nasiriyah, who has remained in Baghdad’s Tahrir Square since attending the March 1 rally, told Al-Monitor, “I am going to die either way, from the virus or fighting against the government, but at least I know I'll have died fighting for change rather than from a virus at home.”

“The death toll from the virus is much lower than the number of casualties killed by pro-Iranian militias during the last five months,” he added.

Nearly 700 people have been killed and about 30,000 wounded since the protests began in October.

Distrust toward the Iraq health care system has led some protesters not to take the authorities' advice seriously. Iraq’s health care system, which once had the highest medical standards among the Middle Eastern countries, has declined significantly due to decades of wars, sanctions, corruption and political crises.

Yusuf Mikhaiel, a Christian protester and a medic from Baghdad, told Al-Monitor, “Iraq's Ministry of Health is pathetic, dysfunctional and underfunded. The virus will eventually spread everywhere, due to years of negligence and government corruption.” He added, “The real virus is the government.”

The protesters accuse the government of hiding the actual numbers of those infected and the virus' transmission from elsewhere to Iraq.

“Iran is a state of liars. It lied about the numbers of casualties in the anti-government protests, lied about the Ukrainian airplane for four days and is lying about coronavirus now as well,” tweeted Iraqi activist Ahmed Fawzi, adding, “Iran is the reason for the virus' spread in Iraq and everywhere in the region.”

“Iran's regime is always lying about everything, just like the Iraqi government — Iran puppets,” another Iraqi protester tweeted Feb. 23.

The protesters' strong feelings against Iran's influence in Iraq have contributed to the formation of conspiracy theories. Some believe that the virus was intentionally transmitted from Iran to Iraq to end the protests.

“The government uses coronavirus as an excuse to end the protests. They tried everything — snipers, live bullets, tear gas, abduction and so on and on — but they failed,” said Yasamin Mustafa, a teenage protester from Basra. “They are now finding another way to stop us, but they will fail again.”