The intense storm comes as the country struggles to contain a coronavirus outbreak within its borders. 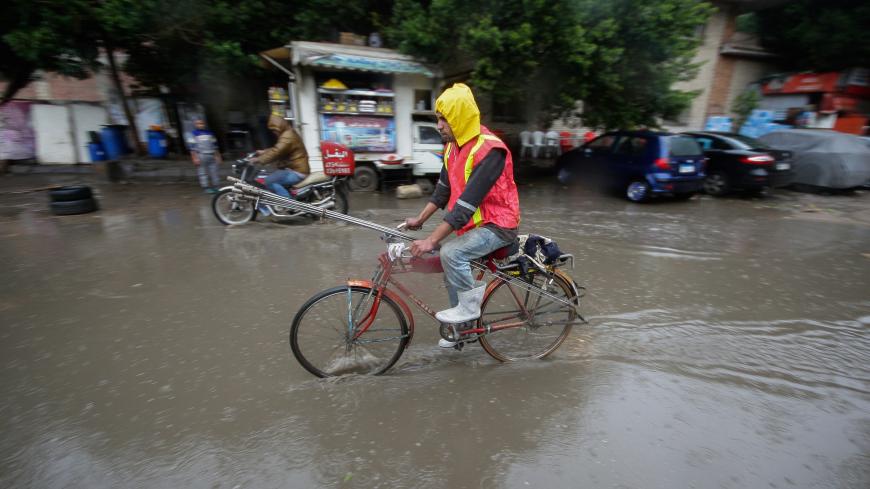 A man rides a bicycle during a thunderstorm and heavy rains in downtown Cairo, as the government announced a day off while the rain exceeds the infrastructure's capacity in most cities in Egypt, March 12, 2020. - REUTERS/Shokry Hussien

A storm system dubbed “the Dragon Storm” is moving through parts of the Middle East this week, wreaking havoc in Egypt. It has killed nearly 20 people, according to the government.

Thursday was declared a paid holiday as Egyptian officials urged residents to stay indoors and avoid walking near lamp posts or parking their cars near trees. A state of emergency was put in place Wednesday as forecasters predicted the “unprecedented” severe weather continuing through at least Saturday.

Dr. Mahmoud Shaheen, the director of weather forecasting at Egypt’s Meteorological Authority, called the torrential rains and heavy winds the worst weather seen in Egypt since 1994, according to news site Egyptian Streets.

Among those killed were a 6-year-old who died when a tree collapsed on the family home in the southern province of Qena. In the Delta province of Menoufia, a 60-year-old man was reportedly electrocuted walking down the street.

Amid the harsh rains and poor visibility Thursday, two trains collided in the capital of Cairo, injuring 13 passengers, according to officials with the Egyptian Ministry of Health.

Ahead of the storm, Egyptian Prime Minister Mustafa Madbouly said Tuesday he would close all schools across the country until the weather passed. The Egyptian Football Association announced it would postpone its upcoming games, and the country's stock exchange and banks were also shuttered.

The adverse weather comes as Egypt struggles to contain a coronavirus outbreak within its borders, which has so far infected at least 80 people in the country and killed two.