Hopes rise for a tribal role to be played in negotiating a cease-fire in Yemen, after local mediation succeeded in achieving several prisoner swap deals between the warring sides. 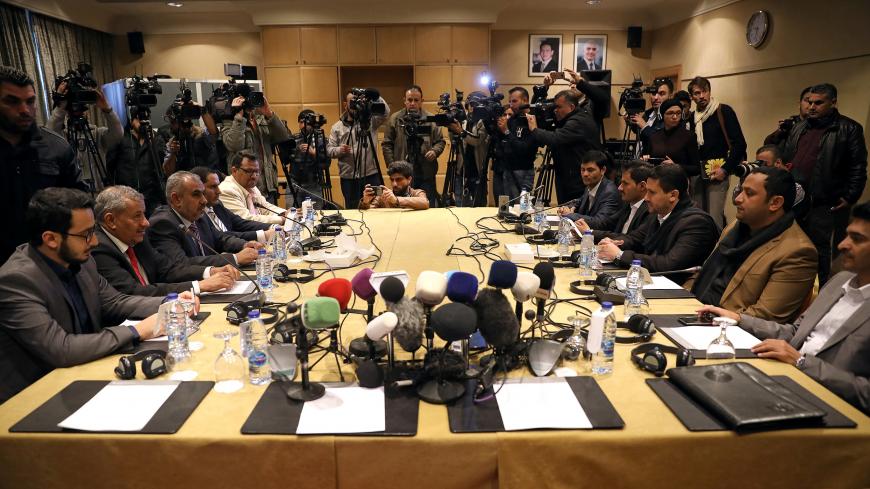 SANAA, Yemen — The prisoner exchange dossier between Yemen's internationally recognized government and Houthi rebels has witnessed significant progress recently when 135 prisoners (75 government forces and 60 Houthis) were released through local mediation. The swap was the largest ever mediated by local tribes since the war broke out in Yemen in 2015.

The office of UN envoy for Yemen Martin Griffiths and the International Committee of the Red Cross — which have been playing a significant role in the prisoner swap file since the war started — have yet to comment on the recent exchange as of the time of this writing. Their silence seems unusual since both parties have always welcomed any step taken by any side, considering such steps as a sign of goodwill and a way to advance inclusive negotiations to end the almost five-year war in Yemen.

In the past months, the Yemeni government and Houthis have released several prisoners as part of small swap deals that included from seven to 15 prisoners through local mediation. But what makes the swap significant is the large number of prisoners who were released, thus boosting the positive role of local mediation.

“This deal was supposed to take place on Eid al-Adha [in August], but differences [arose] in regard to two names,” said Abdullah Shadad, a lawyer and member of the local mediation team.

The swap was further delayed after Saudi-led airstrikes against a Houthi-run prison in Dhamar province in September killed more than 120 prisoners affiliated with the government, including 24 of whom were expected to be released as part of the swap deal.

“Then we returned to negotiations for over three months to discuss replacing the names of the 24 prisoners who were killed,” Shadad, who was in Taiz conducting other negotiation rounds, told Al-Monitor in a phone interview Dec. 24.

After several delays, the swap finally took place Dec. 19 in the southwestern province of Taiz, where feelings of joy prevailed in the city of the same name, whose control is divided between the Houthis and government forces.

Shadad said in a Dec. 19 Facebook post that work on the swap started in June 2018, with more than 80 negotiation rounds held between the two sides. “This is a triumph for humanity in time of war," he added.

Yemen is a tribal society where tribes are powerful political actors that play a major role in solving internal disputes, which was clearly reflected in the latest swap.

According to Shadad, the success of the locally mediated swap lies in the “seriousness and will” of both sides to release the prisoners. That will was absent years ago, he said.

The two sides — the Saudi-backed government and the Iran-aligned Houthi group — have their own representatives for prisoners affairs: Dhia Ahdel representing the government and Abdul-Qader Mortadha working on behalf of the Houthis.

“The secret to the success of tribal mediation is that they [local mediators] know the nature of the Yemeni people,” Mortadha told Al-Monitor. “Second, they [the mediators] have the will and are more serious than the United Nations to accomplish [ swap deals].”

Al-Monitor repeatedly tried to reach Ahdel via phone, but there was no answer.

The role of the local mediation is not limited to this particular swap, but it has included “more than 350 exchange deals [since March 2015], during which more than 7,000 prisoners were released from both sides,” Mortadha added.

Two members of the local mediation team confirmed Mortadha’s statement, saying that the warring sides had given them “the authority in conducting and facilitating negotiations.”

However, local mediation was faced with several obstacles during negotiations and the implementation of the swap, Shadad said. “During negotiations, each side was keen to release as many prisoners as possible, specifically prisoners the other side considers high ranking,” Shadad explained. "Families insisted that the first prisoners to be released must be those who spent four to five years in prison — while the warring sides [Houthis and government] wanted the release of senior figures first.”

According to observers, the latest swap offers hope for a wider tribal role that can help reach a cease-fire. However, the Houthis do not believe this is possible.

“If the field commanders [of the Saudi-backed government] have the green light, power and authority [by the Saudi-led coalition], local mediation could enter into such negotiation [for a cease-fire],” Mortadha said.

However, Mortadha believes the success of tribal mediation in achieving the swap deal is that it is not as major as a cease-fire, and that the prisoners file is — first and foremost — a humanitarian issue where all parties are winners.

But, he added, tribal mediation cannot play a role in reaching a cease-fire since government commanders cannot take the decision alone to negotiate a cease-fire, alleging that the decision is “in Saudi hands.”

Efforts to release another batch of prisoners are ongoing, according to Shadad. He noted, “I'm still in Taiz working on a deal that includes 60 prisoners from both sides who were not included in previous swaps because they were problematic.”

Hezam Asem, a mediator in the Dec. 19 swap and humanitarian activist, said he played a significant role in releasing Samed al-Ameri who made the headlines on major Arabic channels, local news media and social media, as his fiancee, Israa Waheeb, had been waiting for him for three years.

Ameri is a humanitarian activist affiliated with the government who was detained by the Houthis in Taiz in July 2016.

After hearing about the campaign Waheeb launched in November for his release, Asem got involved in the mediation to help free Ameri.

“I saw a post of Ameri's fiancee on Facebook demanding his release,” Asem told Al-Monitor. “I saw a brave woman [in a very conservative society] conveying her love to the world, and I decided to stand with her.”

Asem said he appealed to the Houthis’ de facto government in Sanaa to free Ameri and engaged with Mortadha in discussions, telling him that Ameri’s issue is a humanitarian one and he must be set free.

Asem said Mortadha refused to release him initially, saying the Houthis also have several women waiting for their sons and husbands detained in government prisons to be released. However, Mortadha was ready to exchange Ameri for Qasem al-Gunaid, who is a civilian loyal to the Houthis. Gunaid’s case is similar to Ameri’s as they are not military men and were both detained from their homes in Taiz.

“I published a post on Facebook saying I can guarantee the release of Ameri tonight in return for the release of Gunaid,” Asem said, stressing there was a quick response to this initiative from President Abed Rabbo Mansour Hadi’s government.

Asem said he met Ameri in Taiz on the day of the swap Dec. 19 at the Houthi-run Al-Saleh Prison. On that day, both sides met with their prisoners in al-Akrouth area of al-Misrikh district in Taiz during the exchange.

“I met the families of the prisoners and there were unspeakable feelings,” Shadad said. “Seeing the families’ happiness was worth the negotiations [that took more than a year]."