Egypt is working to mobilize Arab states and the United Nations against Turkey's president over his foreign policies and criticism of the Egyptian government. 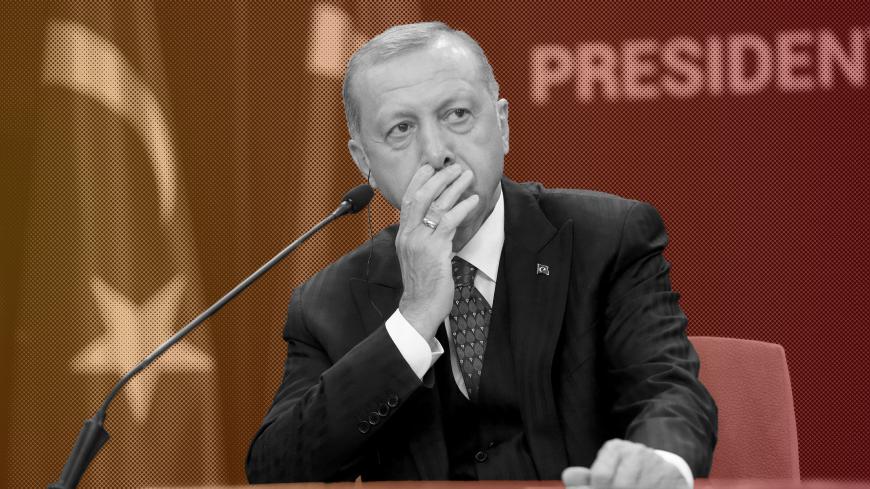 CAIRO — Since Turkey and Egypt publicly exchanged angry critiques of each other during the September UN General Assembly gathering in New York, Egypt has followed up with stern warnings about Turkey in the media and in officials' speeches.

Egyptian Foreign Minister Sameh Shoukry, who met with UN special envoy for Syria Geir Pedersen on the sidelines of the General Assembly, said then, “There should not be any kind of tolerance in dealing with countries that support terrorism and terrorist groups in Syria.”

Then on Sept. 29, the local Egyptian TEN satellite channel hosted prominent Turkish opposition figure Fethullah Gulen, who attacked Erdogan and accused him of “exploiting religious slogans to legitimize corruption in the country.” Erdogan accuses Gulen, who lives in the United States, of being behind the 2016 coup attempt in Turkey.

And since then, Cairo has only intensified its criticism. Egyptian officials have addressed international organizations through speeches about the need to “hold Erdogan accountable” for allegedly “supporting terrorism and sheltering extremists.”

Shoukry called an urgent Arab League meeting Oct. 12 to condemn the attack Turkey launched Oct. 9 on Kurdish fighters in northeastern Syria. He underlined, in an official statement, “the responsibility of the international community represented by the [UN] Security Council in deterring this dire development that threatens international peace and security and in foiling any attempts to occupy Syrian territories.”

The league issued a series of recommendations that included forming a committee to follow up on the Turkish offensive, placing the topic of “the Turkish interventions in Arab countries” as a constant article on the Arab League’s agenda, and classifying the Turkish attack as “an immediate threat to Arab national security and international peace and security.”

Also, on Oct. 12 Shoukry welcomed a delegation from the Syrian Democratic Council of Syria's Kurdistan region, also called Rojava, and reiterated Egypt’s condemnation of the Turkish attack on Syria as an occupation of lands of a "brotherly country." He asserted that fighting the attack can legitimately be considered self-defense under the UN Charter.

The Syrian Democratic Council, the political wing of the Kurdish-led Syrian Democratic Forces (SDF), wants to form a united administration for areas under its rule in northeastern Syria. The SDF, once backed by the United States as part of the fight against the Islamic State, has been battling the Turkish forces.

Jamal Bayoumi, a former assistant foreign minister for Egypt, indicated that country's steps against Turkey at the UN aimed to mobilize public opinion through regional and international platforms against Erdogan’s policies. Like other critics of Turkey, Bayoumi claimed those policies support “terrorist organizations” in Libya and Syria; he said Turkey’s attack on Syria proves that.

He told Al-Monitor by phone, “What is more important than issuing an official UN stance is using these tactics to curb Erdogan’s popularity, expose his crimes and strip him off his international legitimacy. International stances against the Turkish offensive [in Syria] were clear on this; at the same time Egypt made its move against Turkey at the UN.”

Several Western countries and international organizations called on Turkey to halt its military offensive in northeastern Syria and expressed their fear that the operation might worsen the region's instability. On Oct. 17, the Turkish army announced a pause in its offensive to allow Kurdish fighters to withdraw from the area.

Mohammad Abbas Naji, an expert on Iranian and Turkish affairs at Al-Ahram Center for Political and Strategic Studies in Cairo, said he believes Egypt’s attempt to mobilize sentiment against Turkey internationally is consistent with Cairo's foreign policy, as Egypt has always countered terrorism. He said the only difference now is that Egypt has succeeded in making its calls resound and in leaving a tangible impact that was clear through the matching international stances that condemned Turkey's aggression against Syria.

“The biggest impact of the Egyptian role [in the region] was developing a more consistent Arab stance vis-a-vis the Turkish role in the Middle East," he told Al-Monitor in a phone interview.

He said these efforts aim to establish an Arab bloc that has economic and military influence in the region and stands up to Turkey. In the Libyan crisis, he added, Egypt succeeded in reducing the Turkish role by backing united Libyan organizations, mainly the Libyan National Army led by Gen. Khalifa Hifter, as opposed to the Turkish approach of betting on militias in Tripoli and supplying them with arms for years.