Israel seems to be provoking Iran by striking the latter's proxies in Iraq and Lebanon. But Tehran is not showing willingness to directly engage in an all-out war with Tel Aviv. 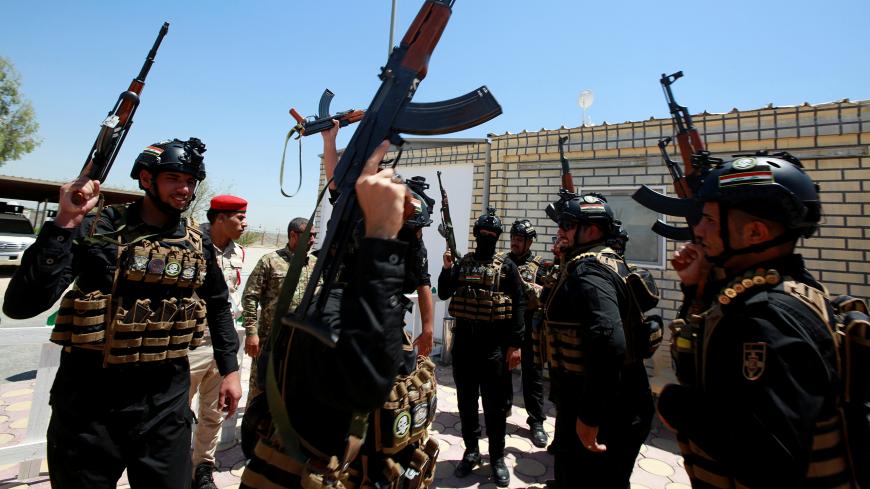 Members of the Iraqi Popular Mobilization Units carry their weapons as they shout slogans at their headquarters, Najaf, Iraq, July 2, 2019. - REUTERS/Alaa Al-Marjani

A massive explosion hit a key arsenal belonging to Iraq's Popular Mobilization Units (PMU) north of Baghdad on Aug. 19, the fourth and latest in a series of such attacks targeting the militia group's facilities in recent weeks.

The PMU came together in 2014 to tackle the rising threat of the Islamic State, which was making rapid advances to control large swaths of territory across Iraq. The Shiite-majority forces have since been backed and equipped by the government in neighboring Iran. The group is widely credited for its key role in the eventual defeat of the Islamic State and for helping flush the militant organization out of Iraq.

While no one has officially claimed responsibility for the recent attacks on the PMU interests, fingers of blame have already been pointed toward Israel. In a statement released Aug. 21, the PMU also implicated the Americans in the chain attack.  "The United States had allowed four Israeli drones to enter the region accompanying US forces and carry out missions on Iraqi territory," the statement read.

Israel has neither confirmed nor denied the accusations. Asked about the latest incident during a trip to Ukraine, Prime Minister Benjamin Netanyahu was brief and refused to address the strikes. "Iran has no immunity, anywhere," he said.

US officials who requested anonymity told The Associated Press and other US media last week that Israel had been responsible for a July 19 drone strike that set a PMU weapons depot ablaze in Amirli, which is between Kirkuk and Baghdad.

The attacks on the PMU have prompted a tough reaction from Kata'ib Hezbollah, or the Hezbollah Brigades, which operate under the PMU umbrella. The group renewed accusations against Israel and warned that a repeat of such attacks would be met with missile strikes on US interests in Iraq.

The threat has raised the stakes for fresh conflict in an already unstable Iraq and in the greater Middle East. The tensions entered a new phase after two drones targeted the press bureau of the Lebanese Hezbollah movement in Beirut. Hezbollah, the Lebanese army, Lebanese Prime Minister Saad Hariri and President Michel Aoun all blamed the Israeli military.

The latest attacks have sparked debates on the implications of the fast-moving developments. "When it comes to Iran, Israel is seeking two major goals: to prevent a consolidation of an official Iranian military presence in Syria and to weaken Iran's proxies in Iraq and Lebanon," foreign policy expert Yasser Nour-Alivand told Al-Monitor. "Amid the US 'maximum pressure' policy toward the Islamic Republic, Israel is grabbing the chance to target Iran's regional influence and reach those two goals," said Nour-Alivand, who is a board member at the Tehran-based Research Institute of Strategic Studies.

All this is occurring against a backdrop of the US-Iran tensions that are already at their height. Following incidents where oil tankers were sabotaged in the Persian Gulf, the United States has been scrambling to build an international alliance to boost navigation security in the strategic Strait of Hormuz. The proposal has been warmly welcomed by Israel but has met Iran's fury. Tehran has warned that any such alliance will further escalate the situation.

In a strongly worded speech Aug. 25, Hezbollah Secretary-General Hassan Nasrallah said Israel made a "very very dangerous" move and warned the Israeli military of "a military response" to the drone attack in Beirut.

In Iran, retired Brig. Gen. Hossein Alaee, who served as a commander during the 1980s Iran-Iraq War under the Islamic Revolutionary Guard Corps (IRGC), told an Iranian news outlet, "Israel is trying to provoke the US into mounting pressure on Iran through these preemptive strikes that are aimed at igniting a proxy war."

Alaee linked the Israeli moves to the recent diplomatic frenzy for a dialogue channel between Tehran and Washington. "Every time there is a diplomatic opening between Iran and the United States, Israel follows this very pattern. The push by the French president to draw concessions from Donald Trump in order to salvage the Iran deal has obviously worried Netanyahu." From Alaee's point of view, however, there is no need for Iran to engage in this conflict for the time being "because Hezbollah and the Lebanese army can give Israel the proper response."

Nonetheless, there are Iranian observers who maintain that Israel has been conducting the strikes following a green light from Washington. Among those experts is Arman Salimi, a Middle East affairs analyst with a special focus on Iraq. "Having received a nod from the US, Israel is after several objectives," he told Al-Monitor. "It aims to weaken the PMU and create the impression that the group is a troublesome force inflicting insecurity upon the Iraqi nation. Meanwhile, by targeting pro-Iran forces, Israel is [trying] to push back crises and insecurity from its own borders and redirect them toward Iran."

Salimi said another reason why Israel seeks to destabilize the region with such strikes is its intolerance for the post-Islamic State order in the region. "Israel wants to ignite new flames of turmoil and fighting among the region's key players," he said.

With the Israeli strikes intensifying, the key questions these days revolve around the likelihood of an outbreak of war. "A direct confrontation between Iran and Israel is far-fetched. Still, if Tel Aviv continues the strikes, Tehran is very likely to enter the conflict via activating its proxies, including Hezbollah," Nour-Alivand said.

Maj. Gen. Qasem Soleimani, widely known as Iran's most powerful officer, sent a brief message to Israel on Twitter. "These insane operations are absolutely the last tries by the Zionist regime," said Soleimani, who runs the IRGC's Quds Force. Posted in three different languages, the message fueled discussions on whether Iran was preparing for an all-out war. Many analysts, however, have ruled out that likelihood. Salimi said Israeli strikes against the PMU may go on, but only in the short term, and that in return, proxy forces involved in the "axis of resistance" would respond in kind near the Israeli borders. "Yet the limited conflict will not lead to any direct battle between Iran and Israel," he said.

In launching the recent strikes, the Israeli government might have also followed domestic political objectives ahead of the country's upcoming general elections. While the generals in Tehran are prepared for any scenario, they are seemingly convinced that the Israeli attacks do not warrant a direct Iranian response and could be handled instead by such proxies as Hezbollah and the PMU. That argument keeps the risk of an all-out war at low levels. But the short-term developments could be a recipe for disaster: Israel may be seeking to initiate a new conflict, especially near the Lebanese border, by eliciting reciprocal measures from Hezbollah, thus flaring up regional tensions and pushing the Middle East into a new episode of instability.