After huddling with President Donald Trump at the White House on Tuesday, Republican senators tell Al-Monitor that the president isn’t keen on sanctioning Turkey. 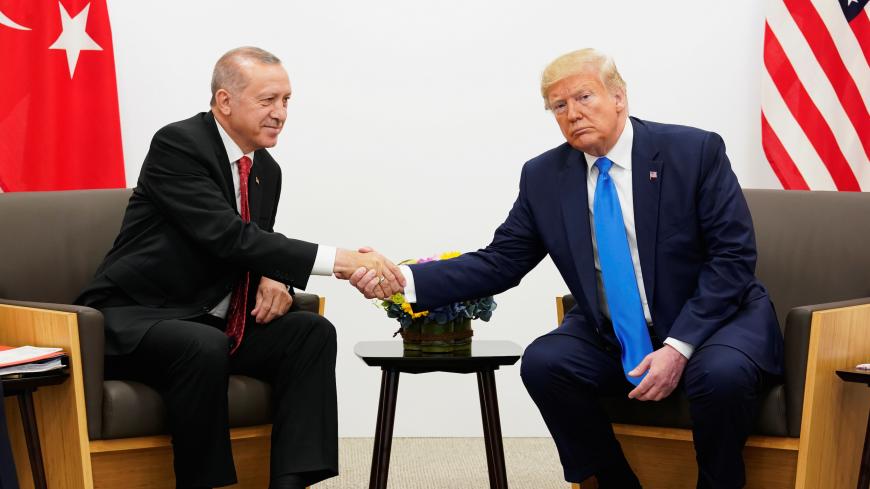 President Donald Trump is still hesitant to implement legally mandated sanctions on Turkey for its purchase of the S-400 Russian missile defense system — even after 45 Republican senators urged him during an unusual meeting Tuesday to follow the law and do so.

“The president is not a fan of sanctions as a whole as a tool,” Sen. James Lankford, R-Okla., who attended the meeting, told Al-Monitor. “He made that clear overall.”

However, Lankford noted that Trump’s advisers were nonetheless “clear that they understand this is what’s required” under a 2017 law sanctioning countries for any “significant transaction” with Russia’s defense sector.

Last week Trump told reporters that sanctions were not on the table, only to reverse course moments later and state that “we’re looking at it.” Trump’s apparent equivocation on sanctioning Turkey prompted nearly all Republican senators to take the unusual step of meeting with him to explicitly press him to implement the sanctions.

Sen. Ted Cruz, R-Texas, told Al-Monitor that the Republican caucus and Trump had a “vigorous conversation” on sanctions.

“Senators emphatically encouraged the president to maintain that line, which is required by federal law, but also to urge Turkey to maintain their historic friendship with the United States and not to tumble into orbit with the Russians, which would be harmful to Turkey and harmful to NATO and harmful to America,” said Cruz.

But The Washington Post reported Tuesday that Trump took little interest in the thorny debacle that has threatened to further undermine the two NATO allies, opting instead to focus on domestic issues.

The 2017 Countering America’s Adversaries Through Sanctions Act requires the Trump administration to choose five sanctions from a menu of 12 options. These include cutting the embattled Turkish economy off from US and international loans, freezing assets on Turkish banks, businesses and executives and cutting Ankara out of transactions on foreign exchanges.

Ankara is pushing Trump to waive the sanctions, but the waiver authority is intended for US partners winding down longstanding defense ties with Russia, not a NATO ally deepening defense cooperation with Moscow. Furthermore, Turkey has already paid for a significant portion of the S-400 system, so sanctions may already be overdue.

The call to sanction Turkey is nearly unanimous on Capitol Hill. The 10 Democrats on the Senate Foreign Relations Committee also pressed Trump to implement the sanctions in a letter they sent ahead of his “partisan meeting.”

While Trump is cool on sanctioning Turkey, he did kick Ankara out of the F-35 fighter jet co-production program after Turkey received its first S-400 shipments from Russia earlier this month. Congress and the State Department fear that the S-400 radar system would allow Russia to spy on the F-35 jet’s stealth capabilities.

Lankford identified the F-35 sales as “the bigger issue.”

“That’s the first issue in front of everyone,” said Lankford. “Are we going to sell the F-35s to Turkey? And the answer is no.”

The issue comes at a particularly fraught time for US-Turkish relations.

During an interview Tuesday, Turkish Foreign Minister Mevlut Cavusoglu appeared to imply that Ankara could reevaluate the US troop presence at Turkey’s Incirlik Air Base should Washington move ahead with sanctions.

And while Trump’s Syria engagement envoy James Jeffrey was in Ankara earlier this week for talks on a US-Turkish safe zone in the Kurdish-controlled areas of northeastern Syria, Turkey has threatened an offensive against the Kurds if the proposed safe zone fails. Ankara also objected to simultaneous meetings between Syrian Kurdish officials and Gen. Kenneth McKenzie, Washington’s top general in the Middle East.