A campaign launched years ago continues to have an impact as more Arab Druze in Israel are refusing to join the army despite the risk of imprisonment. 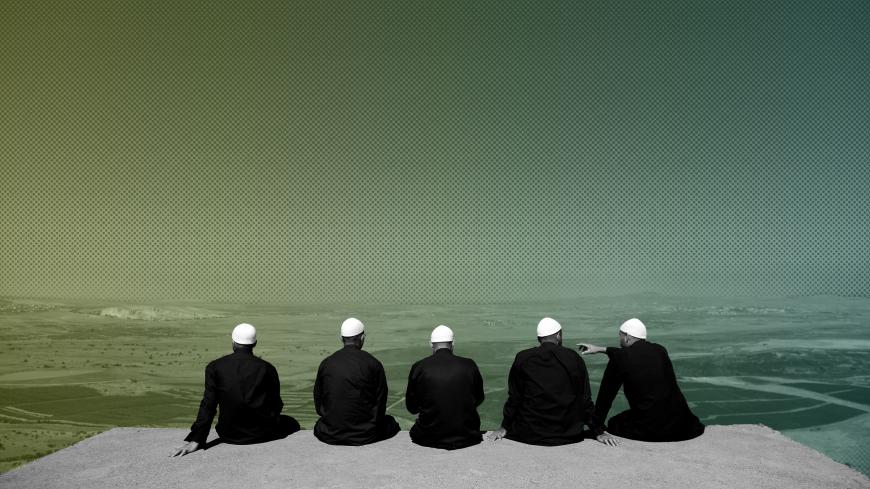 RAMALLAH, West Bank — Kamal Zeidan is one of an apparently growing number of Druze youth in Israel rejecting forced service in the country's military. The 18-year-old served brief sentences twice in April for refusing conscription, and he fully expects to be summoned for a third court appearance soon.

Zeidan is a member of the Druze ethno-religious minority in Beit Jann, a town in Galilee in northern Israel. When his first conscription notice arrived April 8, he headed to Tel Aviv a week later to give notice that he was refusing to enlist. He cited "national reasons," as he considers himself a Palestinian Arab. He was ordered to spend five days in Atlit military prison before being released April 19. When he refused a second time, the military court of the conscription office affiliated with the Israeli army in Tel Aviv then sentenced him April 28 to seven more days.

Zeidan’s father, activist lawyer Yamen Zeidan, told Al-Monitor his son was put in solitary confinement during his first stint in prison because he refused to salute a prison officer, stating, "I am not a soldier, and I will not be one. I ask you to treat me like a detainee, not a soldier.”

For Muslim and Christian Arabs in Israel, enlisting is optional. But Druze men must serve unless they are exempted for certain reasons — for example, if they suffer proven psychological harm from serving, have medical issues or feel service would violate their religious dedication.

Those who resist are often sentenced to progressively longer terms to pressure them. But if they don't change their minds after a year, their cases are referred for military prosecution and they can be sentenced to three years in prison — which is the same duration as conscription.

The obligation to serve stems from a 1956 law that several Druze leaders agreed to in exchange for Israeli authorities recognizing the independence of the Druze religious authority from the Islamic one and granting Druze some privileges and jobs.

“Refusing to enlist is not new,” Yamen Zeidan said, adding, “It began [on] day one of the implementation of the 1956 law. Kamal is not the first or the last to refuse to enlist. There are thousands of others.” He said the number of resisters is growing but isn't publicized because those who resist are reluctant to speak about their experiences to the media. He said that was the case with 15 Druze men his son met in Atlit prison.

The elder Zeidan said the rise in refusals stems from a growing national awareness. Many young Druze also believe Israel undermined equality principles after the Knesset in July passed the National State Law, which defines Israel as the nation-state of the Jewish people.

Yamen Zeidan went through a bitter experience, losing two of his brothers who served in the army. As a result, he was exempted from military service, but he worked from 2002 to 2005 as a jailer for the Israeli Prison Service. He met many detainees. It was then he became more aware of his political and national identity and decided to study law. After becoming a lawyer, he dedicated his time to defending Palestinian detainees, in cooperation with the Palestinian Commission of Detainees and Ex-Detainees Affairs, and fighting compulsory military service in the Israeli army.

Druze are supporting their young men through the “Refuse, Your People Will Protect You" campaign, which began in 2014. Coordinator Maisan Hamdan told Al-Monitor, “The movement considers conscription imposed on young Druze a Palestinian cause, and the fight should be a comprehensive Palestinian one.”

She said one of the reasons behind Druze conscription is that Palestinian history was hidden from them and not taught in their schools. Young Druze were also assigned during their military service to all areas of contact with Palestinians — at borders, prisons and checkpoints — which created a negative image of Druze among Palestinians. "Besides, [information about] Druze participation in the Palestinian struggle against Israel after 1948 was also blacked out.”

Hamdan noted, "The movement supports those refusing conscription and raises awareness. It tries to break the [negative] image about Druze among Palestinian youths.”

She said the movement “focuses on several media campaigns, including documenting stories and experiences of those refusing conscription, to counter the Israeli narrative that claims whoever opposes conscription can't move forward in life."

Hamdan said an activity called "By the Way" — done in association with the abovementioned “Refuse, Your People Will Protect You” campaign — includes several events such as organizing sit-ins and protests like the one called for on May 3 in front of the Atlit prison. It is also publishing long-obscured historical documents about the Druze national role. "By the Way" was launched in Israel by a group of young men and women in 2014 who staged a sit-in in front of Atlit prison to protest compulsory conscription.

On May 3, a number of Palestinians protested in front of the Atlit prison near the city of Haifa, heeding the call of “Refuse, Your People Will Protect You” campaign, to show their support for Kamal Zaidan.

Hamdan explained that the movement is forming a support group that includes professionals in the fields of rights and social justice to accompany youths, starting with their refusal of conscription until they receive exemption, or during their trials in military courts in case of imprisonment.