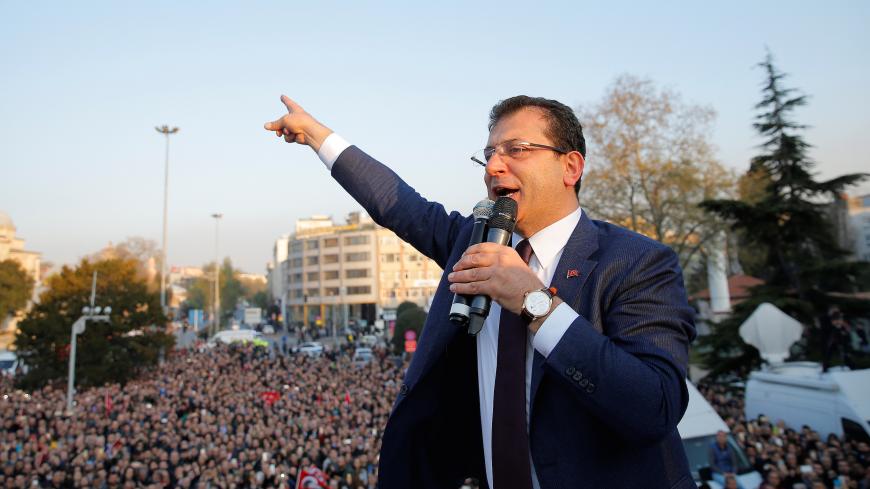 Thousands of citizens waving Turkish flags clapped and cheered outside Istanbul’s city hall as the new mayor, Ekrem Imamoglu, appealed for a new era of peace and unity in Turkey’s largest city.

“Leave behind your quarrels, let's think positive,” Imamoglu pleaded, his voice hoarse from months of campaigning, as he pledged to serve all of Istanbul’s 16 million-plus residents without discrimination. “Greeks, Armenians, Jews, I salute you all,” he said. “This city will be women-friendly.”

Imamoglu delivered a speech suffused with hope and humility after receiving the mandate to become mayor from the Istanbul electoral board more than two weeks after the March 31 municipal elections. The delay, which put the entire nation on edge, was caused by multiple demands by the Justice and Development Party (AKP) for recounts. The ruling party claimed that Imamoglu’s pro-secular Republican People’s Party (CHP) had perpetrated wide-scale fraud.

The loss of Turkey’s financial powerhouse is a bitter blow to the country’s President Recep Tayyip Erdogan, who erected his political career on his term as Istanbul’s mayor a quarter of a century ago.

And he is not about to give it up. Yesterday the AKP, citing mass irregularities, formally lodged an “extraordinary objection” to the Supreme Electoral Council (YSK) in Ankara for a rerun of the elections in Istanbul.  The CHP denies all the claims, saying even after the recounts Imamoglu maintained his lead.

AKP deputy chair Ali Ihsan Yavuz claimed among other things that 16,884 of the party's votes remained unaccounted for, more than the 13,000 or so votes by which Imamoglu beat his AKP rival, Binali Yildirim. He also pointed a finger at Fethullah Gulen, the Pennsylvania-based Sunni cleric Turkey accuses of engineering the failed 2016 coup. Yavuz claimed that several officials purged over their alleged connections to Gulen had overseen ballot counts.

Without Istanbul, the AKP will forfeit a huge source of revenue that has helped grease its electoral machine for the past 15 years and the symbol of erstwhile Ottoman glory that Erdogan has appropriated and vowed to restore.

Erdogan’s authoritarian trajectory, accelerated by the abortive 2016 putsch and undergirded by the shift to a super presidency the year after, had led to dark predictions that elections no longer matter in Turkey. Just how far Erdogan is willing to go to retake Istanbul will be the real test of whether this is true.

Economists warn that another election will drive Turkey’s tottering economy further into the ground at a time when it's under threat of sweeping sanctions from the United States over its purchase of Russian-made missiles. The Financial Times reported further alarming news today, asserting that Turkey is propping up its foreign currency reserves with short-term borrowing known as swaps so as to conceal just how low they have sunk. The Financial Times calculated that after the swaps were stripped out, Turkey's reported net foreign reserves stood at less than $16 billion compared wih the $28.1 billion reported by the Central Bank in early April.

Today’s scenes from Istanbul suggest that the opposition has won the psychological advantage, and the YSK will hard pressed to acquiesce to the AKP’s flimsily argued “organized crime” claims.

Until recently, few had heard of the cheery 49-year-old who served as mayor of Istanbul’s Beylikduzu district before throwing his hat in the ring for Istanbul. But he is rapidly proving to be a match for Erdogan, Turkey’s most talented if also most ruthless politician since the founder of the secular republic, Kemal Ataturk.

One of his first moves after becoming a candidate was to visit Erdogan, allowing him to instantly benefit from the massive media coverage of the president while sending a clear message that he was out for conciliation, not vengeance.

For the first time, Turkey’s squabbling opposition is no longer talking about who will unseat CHP leader Kemal Kilicdaroglu but focusing on how to topple Erdogan. A growing number reckon Imamoglu might be just the man.

As he strode atop his campaign bus today, Imamoglu deftly set a broad and welcoming stage. He invited an old lady in full black burqa to join him there, appealing to God for guidance as the crowds shouted back “amen.” He went on to say that the next order of business was to visit Ataturk’s mausoleum in Ankara.

As for the YSK, it remains unclear when it will announce its verdict on a rerun, which if held would take place on June 2. There are widespread rumors that its members are under heavy pressure from the government to rule in its favor. Should it do so, will it then also revoke Imamoglu’s mandate? What would the popular reaction be then?

Tellingly, it was revealed that Interior Minister Suleyman Soylu had rung Ali Koc, one of Turkey’s richest businessmen and the president of Fenerbahce, a premier league soccer club, to ask him to stop Imamoglu from showing up at Sunday’s derby match in Istanbul, citing a risk of unrest. More likely it was to head off another show of support for Imamoglu. Istanbul’s freshly minted mayor refused to be intimidated. Whether the YSK will display the same mettle is the most hotly debated question in Turkey today.

by Murielle KASPRZAK and Joseph SCHMID | AFP | May 26, 2022
END_OF_DOCUMENT_TOKEN_TO_BE_REPLACED