Why is Ukraine detaining tourists from Israel?

In an attempt to fight migrant labor and sex trafficking, Israel is preventing the entry of thousands of Ukrainian citizens every year. 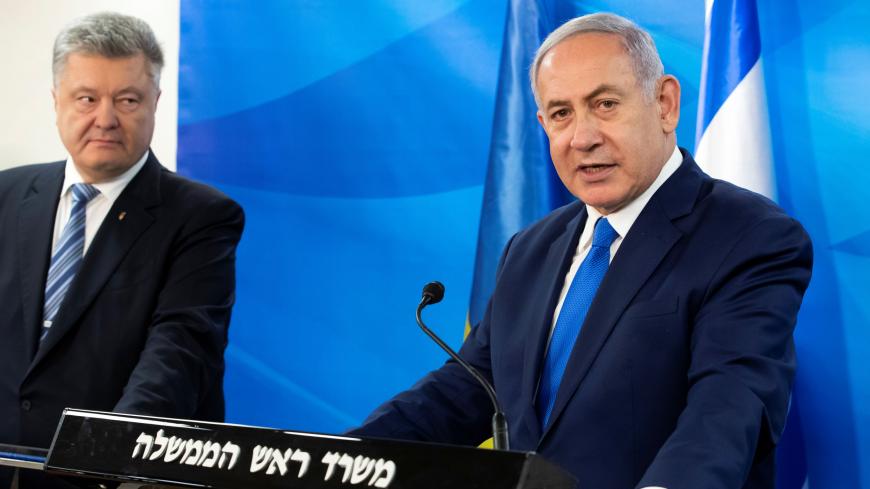 Ukrainian President Petro Poroshenko looks at Israeli Prime Minister Benjamin Netanyahu as he delivers a statement during their meeting in Jerusalem, Jan. 21, 2019. - Jim Hollander/Pool via REUTERS

Israel and Ukraine seem to have excellent diplomatic relations. Ukraine is one of the countries most visited by Israelis, who go on heritage tours and visit the tombs of saints there, like the burial place of the founder of Bratslav Hasidim, Rabbi Nahman, in the city of Uman. But since February, Israel and Ukraine have been waging a vengeful and ruthless war on the backs of tourists from both countries, who are intentionally detained at border crossings, harassed for hours and sometimes even deported back to their countries. The peak of the crisis occurred March 7, when top municipal officials from Kiev were detained at Ben Gurion Airport.

Like in any diplomatic battle, there is a gap between the official reasons and the real reasons of a crisis. Officially, Ukraine explains that it is on the eve of an election and is trying to prevent foreign agents — especially from Russia — from entering its territory at this sensitive time. Since there are more than a million Russian speakers in Israel, Israelis with Russian backgrounds are considered a risk for Kiev. But the real reason has to do with a battle between the two states regarding illegal migration to Israel and asylum requests from Ukrainian citizens, and Ukrainian claims of unfair treatment of their citizens at the Israeli border.

According to estimates by the authorities, about 15,000 migrant workers from Ukraine currently reside in Israel illegally. Many submitted applications for refugee status, which enables them to work in Israel. “Not one of the thousands who submitted applications for refugee status is truly a refugee,” Attorney Alex Cohen, who has family in Ukraine, told Al-Monitor. "In Ukraine there are regions that are very far from any battles and there is no mortal danger, and one can move there. All of this is an excuse to get residency status in Israel.”

He said, “The whole story is based on dealmakers and human resource companies that find candidates, prepare the asylum applications for them, coordinate their arrival and make a fat buck — $1,000 to $2,000 — as a broker.”

A senior official in Israel’s foreign affairs system told Al-Monitor on condition of anonymity, “There are unpleasant consequences due to the visa waiver for Ukrainian citizens. Aside from migrant labor, we have exposed quite a few sex trafficking networks in recent years. Thus, we have had to deport thousands of people back to their country. The Ukrainians don’t like it and they are now taking revenge. The people paying the price are random Israeli tourists. The crisis is still raging and as of now the two sides are sticking to their positions.”

Anna, an illegal resident from Ukraine, told Al-Monitor about the circumstances of her arrival in Israel. “The economic situation in Ukraine is very bad,” she said. “I lived in Khmelnytskyi province and earned about a dollar an hour there. In Israel I earn $15 an hour cleaning. I left my five-year-old daughter in Ukraine. My husband and I are working very hard here and intend to return to Ukraine in six months and open a yacht rental business in Odessa.”

To the question of why they chose to work in Israel rather than one of the European Union nations, which also do not require a visa, Anna responded, “There are many Russian speakers in Israel and there is a relatively established Russian culture here. On weekends we meet up with friends. There is an experience beyond work. In the Netherlands, for instance, I would be totally lost.”

Besides the claims of entry restrictions, the two nations accuse each other of mutual humiliation. Israelis who were detained on entry to Ukraine in February claimed that local police humiliated them and they had soldiers shadow them. Ukrainian citizens detained at Ben Gurion Airport two days later claimed they were put in a basement and not given any food.

“In the local media in Ukraine there is no discussion of the extent of illegal migration to Israel, since it is understood to be an insult to the country. The reports here are that Ukrainian tourists are humiliated in Israel,” Rabbi Hillel Cohen, chairman of the Ihud Hatzalah organization in Ukraine, told Al-Monitor. “This crisis gives us work 24 hours a day. We established a special help line and we provide kosher food to whoever is stuck at the airport [in Ukraine]. We offer translation and other aid.”

Cohen noted, “The treatment of foreigners in Israel is disgusting. It doesn’t matter what, one must not treat a person like an enemy. All of these interrogations and the aggressive manner in which they are carried out — it’s criminal. There is a large population of Ukrainian-born citizens in Israel whose families come to visit them. The whole way [from Ukraine to Israel] they are scared of what officers would do to them at the border.”

Israeli Ambassador to Ukraine Yoel Leon told Al-Monitor, “This week I participated in an important meeting with the Ukrainian deputy interior minister, and we are looking into concrete solutions. They also understand that the issue of migration and sex trafficking is a grave problem and I am sure that by talking we could overcome it. I explain to them that our border agents are doing their job and that they are indeed thorough and tough. That’s the way they work with anyone suspected of being a migrant worker. They don’t always understand.”

Al-Monitor has learned that a plan is now being examined by which a representative of the Israeli immigration authority would question those intending to fly to Israel at the airport in Ukraine, like the model in place between the United States and Canada. The only problem is legally authorizing it. The Ukrainian authorities are hesitant about the idea for now for fear of negative local opinion. Israeli sources believe that the ball is now in Ukraine’s court.

“As long as they do not comprehend that sex trafficking and migrant labor are not something we would ever tolerate, this crisis will not be resolved,” an Israeli source working on this issue told Al-Monitor on condition of anonymity.