Following last year's $20 billion French-Saudi deal to accelerate al-Ula’s development, there are more international archaeologists on the ground than ever before. 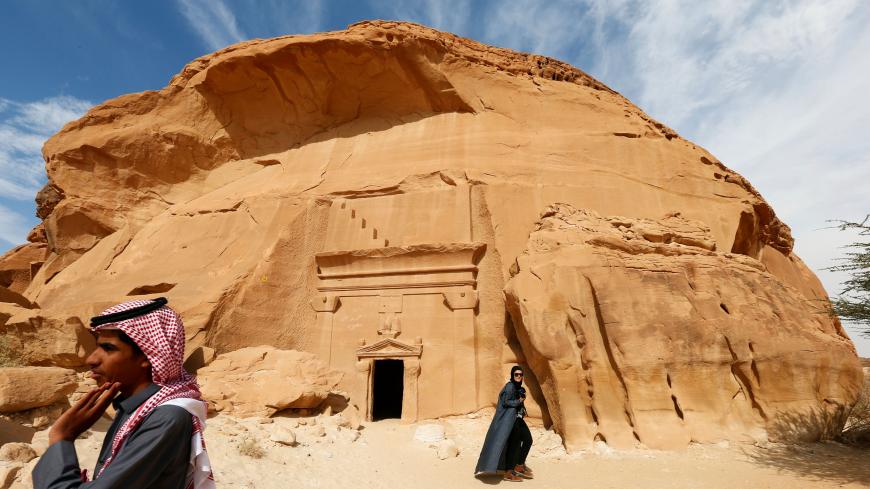 Last year marked Saudi Arabia's entrance on the international heritage scene, and the kingdom can now boast of having several groundbreaking projects across the country. Nowhere is their investment in history more apparent than in al-Ula.

In the northwestern town of al-Ula in Saudi Arabia, the three-week Winter at Tantora festival came to an end earlier February.

The guests — some of whom paid thousands of dollars for tickets and were treated to luxury desert accommodations — had gathered to commemorate the start of the winter planting season and be entertained by international singers, hot air balloon rides and horse riding exhibitions.

The festival’s main attractions, though, were the area’s preeminent archaeological sites, arguably the most magnificent in the country.

The first is al-Ula, an ancient town with the same name as its modern successor. The site is a warren of abandoned stone and mud-brick houses, which one archaeologist says were “inhabited from at least the 12th century right up until the 1980s."

The site that has really got people talking, however, is the nearby pre-Islamic UNESCO World Heritage Site of al-Hijr, also known as Madain Saleh — one of four World Heritage sites in Saudi Arabia. This much earlier site covers over two acres and is a spectacular series of 111 rock-cut tombs dating from the 1st century B.C. to the 1st century A.D. The tomb owners were Nabataean residents belonging to the elite of Hegra. Hegra was the second-largest and southernmost Nabataean city on the ancient caravan route between the Arabian Peninsula, the Red Sea ports and the Mediterranean, but has long since succumbed to erosion and material reuse.

The Nabataeans were a nomadic people who grew rich from their success at trading. The Nabataeans formed permanent communities here over several centuries, from at least the 2nd century B.C. The complexity of their settlements can be seen at Petra, Jordan, but the Nabataeans also formed significant and impressive communities here, approximately 480 kilometers (298 miles) south. Like Petra, however, their kingdom was annexed by the Romans in A.D. 106, although early Arabic inscriptions scattered on the rocks show that it continued to operate as a well-known station on the road to Medina and Mecca.

Madain Saleh’s burial chambers were stripped years ago of their wooden doors and any other objects within, but many retain their elaborate orange-red facades, which are in remarkably good condition and full of personality, all designed to demonstrate the owner’s wealth, status and influence. Some display eagles or Assyrian-style stepped crenellations above the mantles, others Egyptian sphinxes; most are at least fronted by Greek pediments and Roman columns, and one-third of them have Nabataean inscriptions — far more than at Petra.

With all this history to their name, it is hardly surprising that al-Ula’s sites are the focus of several tourism advertising campaigns as part of Vision 2030. The sites have also caught the eye of Crown Prince Mohammed bin Salman, who — after driving a dune buggy around the site — put al-Ula under a royal commission in mid-2017.

Since then Prince Mohammed has used the sites as part of soft diplomacy, and it’s working: Last year France and Saudi Arabia signed a $20 billion deal to accelerate al-Ula’s development. And after archaeological surveyors identified some 60,000-100,000 unknown sites in this region alone, more international archaeologists are on the ground than ever before. Saudi relations with the West have taken something of a wobble recently, particularly after the murder of journalist Jamal Khashoggi. Grand heritage projects such as this are therefore important — and easy — counterweights to disfavor.

It has not been all smooth sailing. For many years Saudi elites and Wahhabi ideologues have considered the existence of archaeological sites — especially pre-Islamic sites — to be obstructive to more expedient “Arab-Muslim” visions of the Saudi national identity. Indeed, it seems that even beyond general neglect, some conservative clerics have gone to great lengths to deter residents from visiting al-Ula, preying on people’s piety by promulgating the idea that the sites are “haunted” by jinn. A quick sweep of the internet can also reveal multiple accounts of the site’s curse, as mentioned in the Quran.

This is a common belief across the Middle East and Africa (Al-Monitor has been told first-hand about jinn at archaeological sites in Morocco, Egypt, Sudan, Syria, Turkey, Jordan, Qatar and Iraq), but it does not usually take on as sinister a tone as it has in Saudi Arabia.

Nevertheless, while it’s still safe to say that the Saudis are some time away from their goal of attracting 2.5 million tourists annually (Petra only received 780,378 in 2017), anecdotal evidence suggests that tourist numbers are very slowly increasing, particularly among domestic travelers and Saudi youths. The issuing of international tourist visas, promised for 2019, could encourage this trend, if the Saudis really want it to, but until then there is much to be done to convince the world that they can pursue modernity through history.