How US sanctions could be boosting Iran's presence in Iraq

Reimposed US sanctions have encouraged an active Iranian geo-economic agenda in neighboring Iraq, a profitable market where Tehran can ease the pressure coming from Washington. 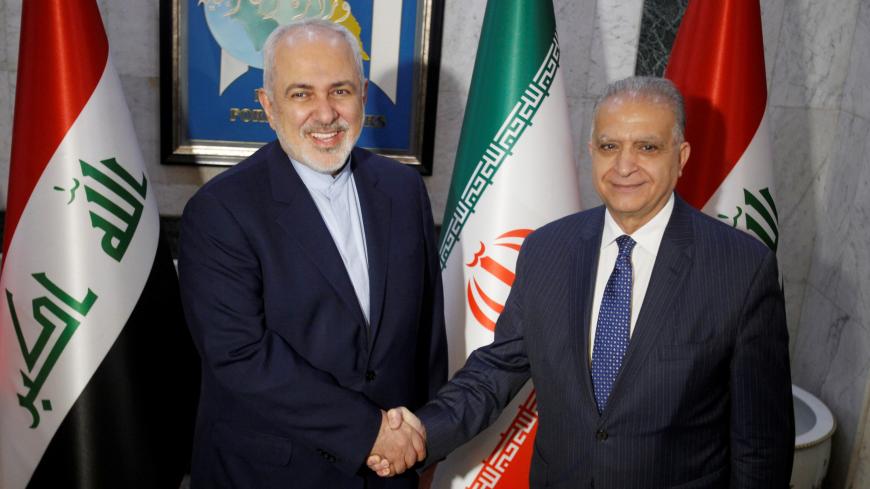 Geopolitical power projection could be, at first sight, the logic underlying Iran's policy of expanding ties with and playing a role in Iraq. But in recent years, and with the growing necessity arising from the reimposition of US sanctions, Tehran has chosen to also focus on geo-economic interests in Iraq. It has tried, therefore, to augment its share of the Iraqi market and major economic projects, helping develop Iraq’s soft and hard infrastructure.

The vacuum created by the 2003 US-led invasion of Iraq provided significant room for Iran's strategic interactions with Iraq. And now the Trump administration's sanctions have paradoxically helped Iran concentrate on pursuing geo-economic interests in Iraq.

During the period stretching from March 21, 2018, to Dec. 20, 2018, Iraq absorbed 20.7% of Iran's non-oil exports, surpassing China, which had long stood head and shoulder above other destinations for Iran's non-oil products. During the same period, Iraqi imports from Iran witnessed a 48% jump compared to the same period in 2017. Between the figures, one can read an important growing trend in Iran's foreign trade as a whole, and in its geo-economic ties with Iraq in particular.

According to statistics from the Islamic Republic of Iran Customs Administration, the country exported non-oil commodities worth $580 million to Iraq in 2003. Fourteen years later, the value rose to a staggering $6.5 billion, marking a ten-fold rise in the post-Saddam era. Following the UAE, China and Turkey, Iran is now Iraq's fourth top import partner. It holds 6.4% of the country's total imports. Iranian authorities have even spoken of raising the bar with the ambitious target of increasing the trade volume to $20 billion. And that's not where things end. Tehran has also presented the idea of a free trade agreement with Baghdad.

Both Iran and Iraq are among the very few countries that have yet to join the World Trade Organization. However, domestic regulations on international trade in both countries are complicated, opaque and highly dependent on government policies. This has posed a key challenge to the Iran-Iraq bilateral trade. By pursuing the idea of the free trade agreement, Iran is seeking to liberalize and then consolidate its trade with Iraq. To do so, it has already launched the Arvand Free Zone on the Iraqi border. An Iranian government bill on two other trade zones, Mehran and Baneh-Marivan, is also an inch away from parliamentary approval. Once set up, the three areas will turn much of the strip between the two countries into one enormous free trade zone.

Trade between Iran and Iraq is, however, extremely uneven. In 2017, Iranian imports from Iraq stood at around $89 million, marking a plunge compared to the pre-invasion era. This very imbalance is likely to adversely affect the Iraqi side's willingness to sign the free trade deal with Iran.

Iraq is also serving as a key destination for Iranian technical and engineering services. There are currently 49 such projects undertaken by Iranian contractors in Iraq, 26 of which are being conducted in the autonomous Kurdistan region, while the rest is shared by Baghdad and Basra. Those projects are mainly focused on such sectors as agriculture, energy infrastructure, housing and transport.

On another front, Iran is pushing to play a role in Iraq's transportation infrastructure, most notably with a railroad project connecting the Iranian border town of Khorramshahr to the Iraqi port of Basra. Although Iran has lived up to its obligations in the project and has even assumed the financial procurement, the Iraqi side has demonstrated little interest in the implementation. The railway could eventually connect Iran to Syria via Iraq.

During Zarif's January visit to Iraq, the two sides agreed to set up a joint committee tasked with dredging the shared Arvand River and operating it for maritime transfer of commodities. Again, the Iranian side has fulfilled its commitments and is trying to encourage the Iraqi side to take steps toward implementing the project. Further, Tehran is closely following up on tourism cooperation, particularly in the pilgrimage and health subsectors.

For its geo-economic presence in Iraq, nevertheless, Iran is facing numerous challenges and relentless resistance. The two countries' hard and soft infrastructure for economic cooperation remain undeveloped. On both ends, customs-related problems, countless bureaucratic hurdles, complex regulations, poor transport infrastructure and particularly banking issues are obstacles to bilateral trade. Due to reimposed US sanctions on Iran, banking transactions are now the biggest challenge, slowing down the pace of economic cooperation. The problem has worsened to the extent that transactions are being conducted on national currencies. Now, a total of $1.5 billion claimed by Iranian companies remains unpaid by Iraqi debtors due to the same US banking restrictions.

At the regional level, Iran's geo-economic presence in Iraq is also challenged by rivals, the toughest one being Turkey. Iranian media have repeatedly sounded the alarm on Iran's inability to compete with the Turkish presence in Iraq. Meanwhile, Iran considers Saudi Arabia another threat, which, as part of its geopolitical agenda in Iraq, seeks to tighten any Iranian economic presence there.

At the broader, global level, pressure from the United States has, in recent months, negatively impacted Iran-Iraq economic relations. As part of that, Iranian engineering contractors in Iraq have been coping with a multitude of new headaches. Washington has been trying to offer Iraq fresh alternatives to sabotage Iran-Iraq cooperation in the energy sector.

US sanctions have indeed significantly hindered Iran's ambitious geo-economic pursuit in Iraq. Yet those measures have prompted Iran to further concentrate on the Iraqi market. The depreciation of the Iranian national currency due to sanctions has enlarged Iran's exports to Iraq while attracting more Iraqi tourists, who find an Iran visit more affordable than ever. In addition, the US measures have reduced the costs of economic diplomacy in Iraq, encouraging Tehran to prioritize Baghdad in its geo-economic strategies.

During the past decade, Baghdad has never ceased to remain on Iran's geopolitical agenda. With US sanctions reimposed and the economic pressure mounting, a geo-economic agenda in Iraq is an increasingly necessary choice to be made in Iran's economic diplomacy. Despite its persistent pressure and multiple sanctions, the United States could thus, in practice, be serving its arch foe by facilitating an already growing Iranian geo-economic presence in Iraq.