A sense of national identity has been growing steadily in Qatar since the Saudi-led blockade began in June 2017, and it seems as though an image of the Qatari emir has helped it along the way. 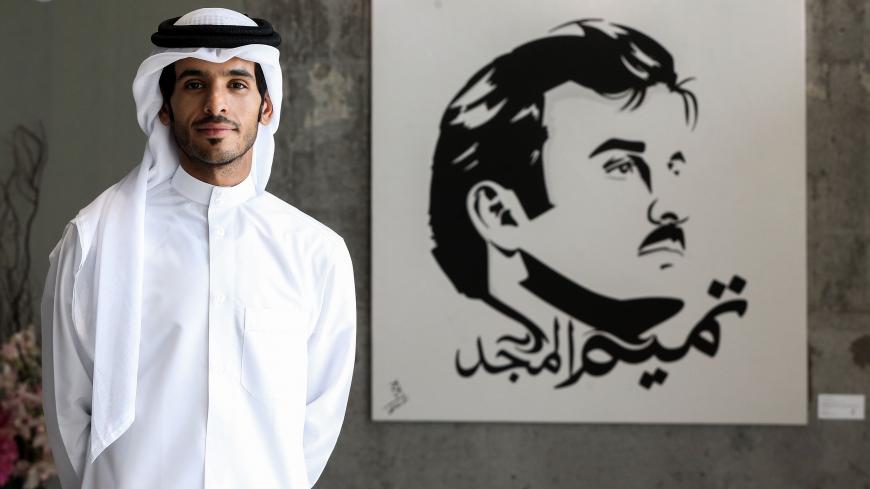 For the last two years, a portrait of Qatari Emir Tamim bin Hamad Al Thani adorns many cars, shopwindows, skyscrapers and other public places in Doha. The image — drawn by now famous Qatari artist Ahmed Al Maadheed — is more than a royal portrait or state-sponsored graffiti; it has become a crystallization of the blockade-induced national sentiment.

The growing sense of unity among once disparate Qatari groups is caused by the blockade that was imposed in June 2017 to break Qatar, according to Ross Griffin, assistant professor of postcolonial literature at Qatar University.

When Saudi Arabia, the United Arab Emirates, Bahrain and Egypt began their trade and diplomatic blockade on Qatar, the international media was quick to refer to it as the Gulf’s "biggest diplomatic crisis in years.” Citing Qatar’s links to extremists groups and to Iran, the so-called Anti-Terror Quartet imposed 13 demands and a strict deadline, while panicked Qatari residents hurriedly stockpiled food in anticipation of what was to come next.

Yet 1½ years later, many international media outlets and academics note Qatar is not only surviving but thriving.

“For Qataris, the blockade really did have an effect in strengthening their identity and sense of nationalism or patriotism. They have turned to each other for support and strength,” Ola Diab, a Sudanese journalist based in Doha, told Al-Monitor.

Another Doha resident who asked to remain anonymous said that many Western expats and even some African and Asian migrant workers have been swept along with national zeal and express their sense of belonging to and pride in the country.

This pride is symbolized by the redundant use of the image “Tamim Al-Majid” ("Tamim the Glorious"), which was drawn by Maadheed before the blockade started, in celebration of Qatar National Day on Dec. 18, 2016. He reposted it from his social media accounts six months later, shortly after the onset of the blockade, as a personal display of support.

“It was not a new portrait. It was something I had done much before the crisis. I posted it only to show my feelings of support towards … the Emir and my pride being a Qatari,” he told the Qatar Tribune July 2017.

To Maadheed’s surprise, the image quickly went viral and soon appeared as massive murals in vacant spaces in the capital. Subsequently, thousands of residents began drawing graffiti in public places, praising the emir and proclaiming their love for their country.

Some of these murals were displayed as “the truest examples of public art” in the Museum of Islamic Art Park, and was the focus of an exhibition — attended by Al-Monitor — of Maadheed’s artworks of the Al Thani royal family and others at the W Hotel in Doha on Juy 2-Sept. 10, 2017.

Quickly, the pensive image of the emir began to appear on stickers, mugs and other paraphernalia, becoming so popular that Maadheed released newspaper statements warning the hundreds of people who reproduced it without permission that he would take legal action against them. In a video posted to his Twitter account, Maadheed — who was a relatively unknown artist before the drawing catapulted him to fame — said, “There has been a commercial exploitation by some shops where they sell products that contain the image of 'Tamim Al-Majid' at high prices and exploit the feelings of the people's love for the emir.”

Economic advantages notwithstanding, not everyone is convinced this is an authentic grassroots movement, although this has not been questioned in the media thus far. For example, aside from public exhibits, the state has invested great energy into disseminating the image to as many people as possible.

Western expats in particular have been given paraphernalia to display, leading one individual to comment anonymously to Al-Monitor that if one does not display the portrait somewhere on one’s property this might be seen as insubordinate. Yet very few are ready to talk about it on the record — of the 10 people approached by Al-Monitor to comment on this story, seven declined to do so.

Despite this, when walking around the streets of Doha it seems undeniable that the image has become a symbol of the fight between Qatar’s Luke Skywalker and the Saudi-bloc’s Galactic Empire. Indeed, for Diab, while the portrait has little intrinsic aesthetic value — “[it] is not unique in any way … there is nothing very artistic about it” — it has nonetheless “provided a unity emblem that people were looking for.” As such, it almost seems as if this image is not simply representative of a growing national identity, but rather has actively helped to construct it.