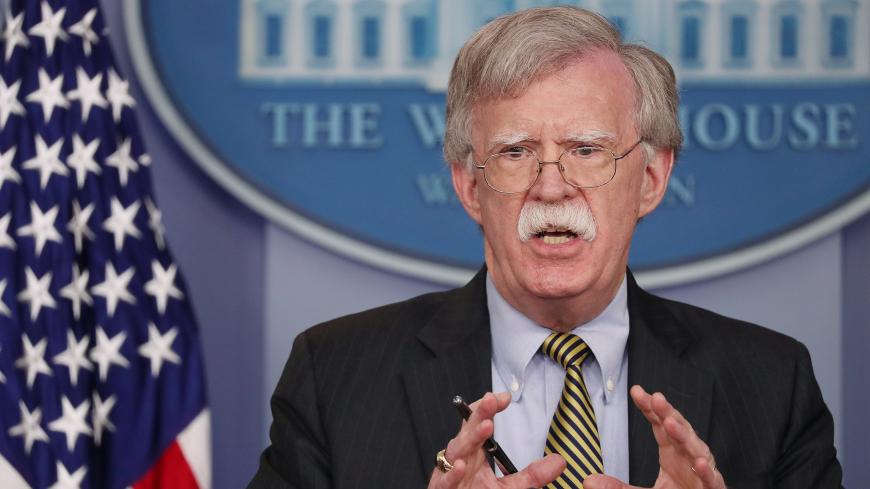 US national security adviser John Bolton answers questions from reporters after announcing that the US will withdraw from the Vienna protocol and the 1955 Treaty of Amity with Iran as White House Press Secretary Sarah Huckabee Sanders looks on during a news conference in the White House briefing room in Washington, DC, Oct. 3, 2018. - REUTERS/Jonathan Ernst

By pulling out of a decades-old treaty of amity with Iran, the Donald Trump administration is sending a clear message to the rest of the world that it will not accept any challenge to its policy to counter Iran.

The UN’s top court ruled this morning that the US should lift sanctions on Iranian “humanitarian” goods. Within hours, Secretary of State Mike Pompeo had announced the US was pulling out of the treaty that the Iranians used to bring their complaint to the International Court of Justice (ICJ).

“This basically says, look, the US is serious about reimposing sanctions and international rulings,” said Joel Rubin, a former deputy assistant secretary of state in the Barack Obama administration. “And if the rulings go against us, we’re going to withdraw.”

“The message is simple to the Europeans,” Rubin told Al-Monitor. “This is the policy, and the Trump administration isn’t about to turn it around, regardless of what they do.”

"Our European partners … have chosen to remain in the Iran nuclear deal,” Bolton said. “But as I've said to them, it's like … the six stages of grief. First you have denial, then you have anger, eventually you get to acceptance.”

Why it matters: The 1955 Treaty of Amity with Iran, signed between the Dwight Eisenhower administration and the shah, established economic and consular relations with Iran. It served as the basis for Iran’s legal challenge at the ICJ, which found in favor of Iran regarding US sanctions that impact food, medicine and spare airplane parts.

Pompeo called the ICJ’s decision a “defeat” for Iran, but said the UN court had overstepped its legal boundaries.

“We’re disappointed that the court failed to recognize that it has no jurisdiction to issue any order relating to these sanctions measures with the United States,” Pompeo said. He added that the US “is doing its work on Iran to protect its own essential security interests.”

America First: The move fits Trump’s “America First” approach to assert US sovereignty and abandon deals that don’t meet US interests. The US administration also recently withdrew from the UN Human Rights Council and ended its contribution to the UN Palestinian refugee agency.

“This really has less to do with Iran and the Palestinians than with the continued consistent policy of the United States to reject the jurisdiction of the International Court of Justice, which we believe is politicized and ineffective,” Bolton said.

What’s next: Hear that sound? The Trump administration is tearing up more treaties today. Bolton announced that the US was also withdrawing from an amendment to the Vienna Convention on Diplomatic Relations that Iran could use as the basis for another lawsuit. He said the US planned to review all international agreements that exposed the US to dispute resolutions in the ICJ.

“The United States will not sit idly by as baseless political claims are made against us,” Bolton said.

Know more: Follow Al-Monitor’s coverage from both Washington and Tehran as the US prepares to resume biting oil sanctions on Iran next month even as other parties try to salvage what they can of the moribund nuclear deal.