The US withdrawal from the UN's Human Rights Council has given some Palestinians hope for a stronger pro-Palestinian European role without the United States to hold it back. 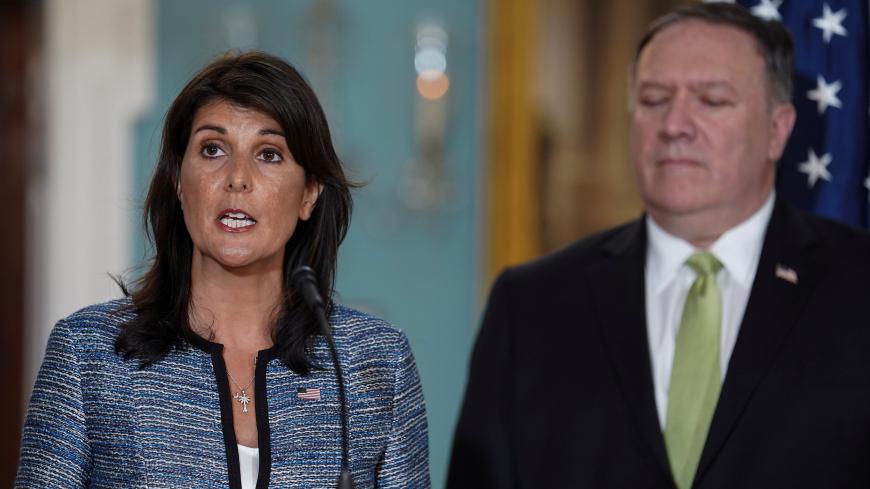 US Ambassador to the United Nations Nikki Haley delivers remarks to the press together with Secretary of State Mike Pompeo, announcing the US withdrawal from the UN's Human Rights Council at the Department of State, Washington, US, June 19, 2018. - REUTERS/Toya Sarno Jordan

GAZA CITY, Gaza Strip — In the wake of the US withdrawal from the United Nations Human Rights Council (UNHRC) on June 19, Palestinian officials are looking forward to a more efficient European role that would serve the Palestinian cause.

Palestinian Prime Minister Rami Hamdallah commented June 20 on the US move during a ceremony held for the national holidays of Europe's Scandinavian countries. The ceremony, attended by officials from Norway, Sweden, Finland and Denmark, was held in the city of Ramallah.

“Establishing peace and stability in the region and confronting incitement attempts against the rights of our people requires a strong, effective and unified European role. The European Union is able to place pressure on the occupying state, stop its violations and force it to abide by international resolutions, laws and agreements,” he said.

When US Ambassador to the UN Nikki Haley announced Washington’s withdrawal from the UNHRC, which was founded in 2006 in support of human rights around the world, she described the council as “hypocritical” and a “cesspool of political bias.”

On May 18, the UNHRC condemned “the disproportionate and unrestrained use of force against civilians in the occupied Palestinian territories in the past weeks.” It also adopted a resolution with the support of 29 countries to form an international commission of inquiry and investigate "all violations of international humanitarian law and international human rights law" committed by Israel against the Great Return March demonstrators.

This is not the first international organization that Washington has withdrawn from under US President Donald Trump. In October 2017, it withdrew from the United Nations Educational, Scientific and Cultural Organization (UNESCO) over what it termed the organization's anti-Israel bias. The United States does not recognize the legitimacy and legality of the resolutions issued by UNESCO against Israel.

Taysir Khaled, a member of the Executive Committee of the Palestine Liberation Organization, told Al-Monitor, “The US is launching a systematic attack on international institutions in order to provide political cover to Israel and ensure its impunity.” He went on, “But this withdrawal may be useful [for the Palestinian cause], as it will prompt neutral European countries such as Russia and France, which unlike the US are not hostile to the Palestinian people, to play a bigger role in the Palestinian-Israeli conflict.”

Khaled said that concurrently with the US withdrawal from the UNHRC, Russia put forward its candidacy for membership of the UNHRC from 2021 to 2023. “The re-election of Russia at the UNHRC in light of the US’ absence may lead the UNHRC to play a better role in protecting human rights around the world,” he said.

The UNHRC consists of 47 member states, which are elected by the General Assembly. But during the October 2016 elections, Russia was denied membership of the council and has not been re-elected since. The date of the next UNHRC election is yet to be scheduled.

Salah Abdel Ati, the director of the Palestinian Center for Policy Research and Strategic Studies in Gaza, told Al-Monitor that the UNHRC resolutions that condemn Israel are not binding for Israel. However, he said, the resolutions are legally very important for Palestinians, explaining, “The resolutions issued by this council … can serve as supporting documents whenever Palestinians want to prosecute Israel before the International Criminal Court.”

Awkal continued, “The US withdrawal allows countries like France, Russia and Britain, which are not biased toward Israel, to have a bigger role in protecting the UNHRC system. This system condemns Israel's crimes against our people. And if Israel continues to fail to comply with the UNHRC resolutions, then these countries will place pressure on Israel to force it to comply with such resolutions. These countries may even go so far as to reduce their [diplomatic] and commercial relations with Israel.”

Wadih Abu Nassar, a political analyst specializing in Israeli affairs and the director of the International Center for Consultations in Haifa, told Al-Monitor that Washington's withdrawal from the UNHRC will harm Israel at the international level.