The "Immigrant Women’s Solidarity Platform" connects Turkish women who are planning to move or have moved abroad, assisting them in settling down in their host countries. 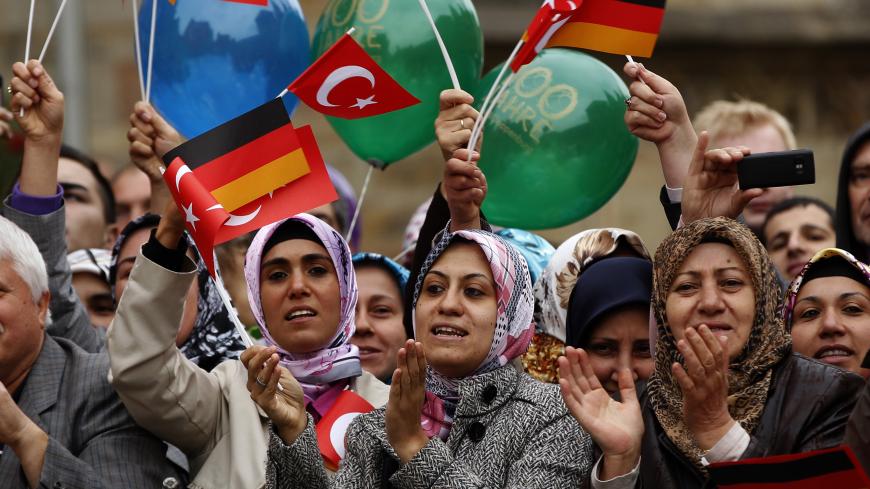 The increasingly popular online platform “Gocmen Anneler” (“Immigrant Mothers”) — or the “Immigrant Women’s Solidarity Platform” as the founders prefer it to be known in English — actively serves as the voice of Turkish women who seek a network, support and ways to share their experiences while living abroad. The results of the online survey “Immigration Routes” conducted with the participation of some 1,000 Turkish women who moved abroad in recent years were published at the end of March and provide fascinating insights into the experiences of these women.

“Gocmen Anneler,” founded by Pinar Erbas Erdurmaz and Esra Iyidogan Pencereci, started as a Facebook group in June 2017. They spoke to Al-Monitor and shared their story. The two businesswomen first met in Istanbul in 2007, and they soon became friends. Erdurmaz and Pencereci went through milestones in their lives around the same time — marriage, new jobs, children and moving abroad for their husband’s jobs, to Montreal and Dublin, respectively.

Moving to a foreign country brings with it many unknowns. “In the beginning, all our dilemmas, questions and basic needs were related to our babies and the desire to sustain their routines in the new countries. We were lost in topics related to immigrant motherhood,” Erdurmaz said.

Today, their online platform has grown into a popular site that brings together more than 14,000 Turkish women scattered across 80 countries, including prospective immigrants. Obtaining residency permits, learning a new language, children having to adapt to their new lives, raising bilingual children, finding a kindergarten or school, searching for a job and handling racism or violence against women are among the main topics of interest for the group's members. The site's latest sub-group, "Gocmen Anneler ve Ozel Cocuklari" ("Immigrant Mothers and their Special Need Children"), focuses on those with children with genetic anomalies, disabilities or special needs. Another sub-group, "Gocmen Anneler Okul Projesi" ("Immigrant Mothers School Project"), provides audio-visual content on other cultures and countries to a group of primary school teachers in Turkey.

Since the site's launch, Erdurmaz and Pencereci have come to realize that “we are first of all women and we need to show solidarity among ourselves.” While they decided to keep the original name for the platform, they now target "women" instead of just "mothers."

Between Dec. 11, 2017, and Jan. 23, 2018, they carried out the “Immigration Routes” survey, and 986 group members, mostly between the ages of 25 and 44, from 60 different countries participated. The women were asked about the differences between Turkey and their host countries on topics such as health care, education, job opportunities, social life, the environment and the challenges of raising children abroad.

The site's founders came up with the idea of the survey because of the challenges they faced in their new homes abroad. They posted questionnaires on their website every Friday, which contained either open-ended or multiple-choice questions for the group members to answer. As the group grew and more members submitted their answers, Erdurmaz and Pencereci decided to analyze the data obtained in order to better understand the group members' demographics, past experiences, expectations and motivations.

They said the reasons for the group members to have left Turkey vary widely, such as “giving children better opportunities, exposing children to a better educational system, achieving career goals, working in a more stable economic system and living in a society in which individuals have relatively more peace and independence.” The issues that respondents most commonly cite as unsatisfying in Turkey are the country’s politics and the lack of prosperity or comfort, individual freedoms, green spaces and the failures of the education system.

Among the survey respondents, 39% have lived outside of Turkey in more than two countries. Erdurmaz and Pencereci noted that some group members are seasoned expats or employees with multinational companies, while others found employment in the countries where they studied. Some are single; others have married Turkish men or foreigners. “There is another group of members — like us, expat wives — who moved abroad because of their husbands' jobs. When we look at the data we see that 57% of the respondents are like me and Esra, but 43% said they are work migrants themselves,” Erdurmaz said.

The respondents have a striking level of education — 95% of them hold university, graduate or doctoral degrees, which makes them nine times more educated than Turkey’s average rate for women. According to TGI Turkey 2018 Survey, a periodical research by Kantar Research Company, only 10% of Turkish women have university or higher education. In the paper “Why Don’t Highly Skilled Women Want to Return? Turkey’s Brain Drain from a Gender Perspective,” academics Adem Yavuz Elveren and Gulay Toksoz published findings indicating that “the political, social and cultural atmosphere” damage gender equality in Turkey, and that “increasing gender disparities in Turkey that disadvantage women in education and labor markets are significant push factors in the migration decisions of highly skilled females.”

The survey also revealed that while 46% of participants are working in their host country, 54% are not, even though almost all the women worked back home. One of the reasons for this, according to Erdurmaz and Pencereci, could be that 48% of respondents moved abroad in the last two years, therefore needing time to adapt and settle down, learning a new language, looking after children without an established support system or navigating legal barriers to find and accept paid employment. However, they noted that "this motivates and triggers the entrepreneur spirit in [many of] these women to create their dream jobs and turn hobbies into [paid activities].”

One such group member and entrepreneur is Tugba Alparslan, who moved to San Francisco from Istanbul three years ago because of her husband’s job. She spoke to Al-Monitor about transferring to a completely new career after having been a successful IT project and portfolio manager at Turkey’s largest telecom company, “as a female, in a department mostly dominated by men.” Due to her highly sought-after computer engineering background and familiarity with California because she previously studied at UCLA, she had received numerous interview requests from regional recruiters. But she put those aside and decided to take the tougher road. “I said to myself, 'Now or never,' and started to work on creating my dream job in natural cosmetics and perfumery,” Alparslan said. She did a lot of research, took courses, experimented and then registered her company — Loverdure Natural Cosmetics — in San Jose in 2017. She acknowledges the highly competitive industry in which she started her new business, but proudly talks about her 100% natural, mostly organic, high-quality and handmade products.

Alparslan enjoys being part of the network of other Turkish immigrant women. “This group is a lively one. You smile, you frown, you hope. People mostly respect each other’s opinions, but occasionally over-reactions on some of the hot topics [religion and politics] happen,” she said. In such cases, common sense always rules, Alparslan noted, adding, “I appreciate freedom of speech plus respect. And a lot of solidarity.”

Erdurmaz and Pencereci are in the process of expanding the scope of their activities and building country-specific contents that include a YouTube channel with expert videos on popular topics, as well as individual consultations by psychologists, pediatricians, therapists and lawyers.

The two women are planning to write a book in the near future, spurred by “the many inspiring, impressive and motivating stories of our members.” And so the platform keeps expanding in directions both socially responsible and emotionally meaningful.