Why Israelis root for Iran, Morocco in World Cup

With no team of its own competing in the World Cup, Israelis are supporting others from the Middle East regardless of political differences. 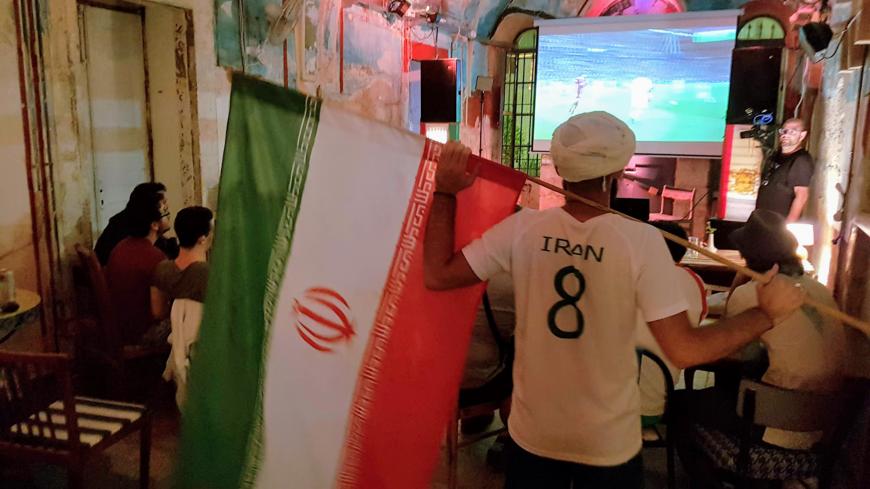 Fans of the Iranian soccer team leaped out of their seats cheering wildly and waving Iranian flags when Saeid Ezatolahi thumped the ball into the back of the net in Wednesday's World Cup game against Spain, tying the game 1-1 and leaving Iran a chance to advance. A moment later, groans of disappointment spread as the goal was disqualified.

This scene did not take place in Tehran or at the stadium in Kazan, Russia. It was in a bar in Jerusalem, where the fans were mostly Israelis expressing their shock and disappointment at Iran’s defeat.

Geopolitics set aside, many Israeli Jews are rooting for Muslim countries in this year’s World Cup, including Israel’s archrival Iran. The Israeli national team has only competed in one World Cup, in 1970, leaving local soccer fans to root for other teams when the quadrennial event rolls around.

This year, Iran and four Arab states — Saudi Arabia, Tunisia, Morocco and Egypt — are competing in the World Cup in Russia. This rare showing of countries from the Muslim world, from which a large percentage of Israelis immigrated in the 20th century, has prompted many in Israel to cheer on the teams of their ancestral countries. As of 2011, Israel was home to 141,000 Jews of Iranian descent, 492,000 Jews of Moroccan descent, 134,000 of Tunisian and Algerian descent, and 57,000 of Egyptian origin, according to figures from the Central Bureau of Statistics.

The Israeli government has also joined in the World Cup spirit. The Foreign Ministry’s official social media accounts have been publishing messages of encouragement to the Muslim countries competing in the World Cup even though Israel does not have diplomatic relations with Tunisia, Morocco or Iran.

“So many teams from our region competing in the @FIFAWorldCup, Too bad we're not there too! Good luck #IRN, Good luck #MAR,” the @Israel Twitter feed said last week. The @IsraelArabic account also wished Saudi Arabia good luck ahead of the tournament’s opening game against Russia.

Foreign Ministry spokesman Emmanuel Nachshon said that Israel sought “to send a message of support to sport and separate sports and politics” through its social media statements in support of Muslim countries. “We did not receive any official response from those countries, but we do receive on social media very positive reactions from citizens of those nations,” he said.

Pinkas Matan, a self-styled “magician, social artist and researcher of consciousness,” organized Wednesday’s screening of the Iran vs. Spain match as part of an ongoing project called the “Iranian Embassy Jerusalem.” Matan wore an Iran jersey, a white turban and held Iranian flags aloft throughout the game. He succeeded in rallying several dozen Iran fans to the event at the bar of Hamiffal, a communal art center in downtown Jerusalem.

“We organized the event to bring Israelis and Iranians together through culture and art, that’s our mandate at the Iranian Embassy,” Matan told Al-Monitor between cheers of “Iran! Iran!” during the halftime break.

“We were hoping more Iranians would come, but some called and said they were afraid because of the whole episode with Gonen Segev,” he joked, referring to the former Israeli minister arrested earlier this week and charged with spying on behalf of Iran. A handful of Iranian nationals were in attendance, however, including a man who identified himself only as Massoud.

Matan’s family emigrated generations earlier from Tehran, and he said he wasn’t alone among Israelis in supporting the Iranian team at the World Cup.

Ariel Ben Moshe, a Tel Aviv resident who was born in Israel but whose family came from Iran in the 1950s, told Al-Monitor that she was a full supporter of Iran in this World Cup in spite of "the declarations and calls for murder from the ayatollahs. … To be honest, I am cheering for them only because my family came from there; I don't know so much about the team," she said. "Because the Israeli team is a disappointment, I decided to return to my roots."

Many Moroccan Jews in Israel share that sentiment and have proudly cheered on the country’s Atlas Lions. A popular quip in Hebrew circulating on social media notified users that since Wednesday’s Morocco-Portugal game started at 3 p.m., a prayer popular among Sephardic Jews would be held at 2:30 p.m.

Israelis draped in their national flag stood in the Morocco supporters’ section at Wednesday’s game at Moscow’s Luzhniki Stadium and made headlines back home after a video on social media appeared to show Moroccans yanking at the Israeli flag. An Israeli in attendance later clarified that the Moroccan fans in the video were diving for a Moroccan player’s jersey that was thrown into the stands, and that Israeli fans were welcomed with open arms. (The Sephardic prayers may not have helped, as Morocco lost 1-0 and was eliminated from the tournament.)

Uri Levy, a Mideast soccer commentator and founder of the BabaGol soccer website, said the phenomenon of Israelis cheering for teams from the Muslim world has grown in recent years.

“Since the Israel national team is nowhere near the tournament, it’s obvious that people will look for a team to feel good about,” Levy told Al-Monitor in an email from Russia, where he was covering the tournament. Many of them do so out of a cultural connection without regard for international politics, Levy said, just as French and English Jews are cheering for their teams in this year’s competition.

“There are some strong connections still, and you can identify with people and symbols from those countries and still be Israeli,” he said.