Prior to the US withdrawal from the nuclear deal, Iran had hinted that it may leave the Treaty on the Non-Proliferation of Nuclear Weapons in response. That threat now seems closer to becoming a reality. 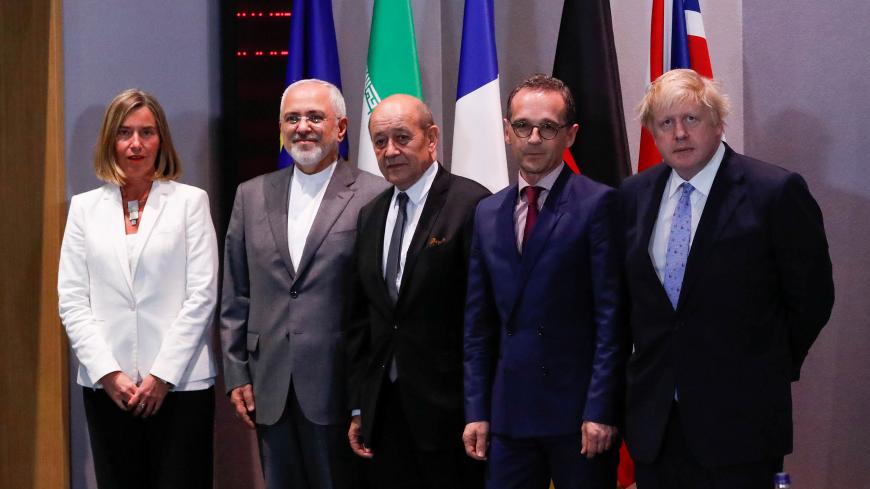 While having granted Europe a chance to save the Joint Comprehensive Plan of Action (JCPOA), Iran is in parallel mulling an exit from the Treaty on the Non-Proliferation of Nuclear Weapons (NPT) in response to the US withdrawal from the JCPOA. Such a move would be accompanied with many legal complications but is nonetheless among the most likely of Iranian responses should Europe fail to guarantee that its interests will be protected as outlined in the nuclear deal.

US President Donald Trump’s stepping up of his threats to pull out of the JCPOA in the months leading up to his May 8 withdrawal prompted Iranian officials to retort that the West — and especially the United States — would be surprised by their response were Trump to follow through with his threats.

The clearest indication of what this surprise response would be came to light April 24 when Ali Shamkhani, the secretary of the Supreme National Security Council, said, “The NPT acknowledges the right of all its member states to leave the treaty if their interests are endangered,” adding that this was an option the Islamic Republic was considering.

This is after Foreign Minister Mohammad Javad Zarif stated April 23, “There are some people in Iran who are talking about that [leaving the NPT]. That’s not, certainly, the government’s position.”

But how seriously should such a prospect be taken? Will Iran truly leave the NPT now that the United States has pulled out of the JCPOA? And does leaving the NPT mean Iranian abandonment of the JCPOA? To answer these questions, one first needs to consider whether Iran’s potential withdrawal from the NPT will be in violation of the JCPOA. Although the nuclear deal does not highlight Iran’s permanent presence in the NPT as a requirement, it does seem to presume it.

For example, the initial section of the JCPOA states that “the E3/EU+3 and Iran acknowledge that the NPT remains the cornerstone of the nuclear non-proliferation regime and the essential foundation for the pursuit of nuclear disarmament and for the peaceful uses of nuclear energy.” The document also points out that the full implementation of the JCPOA will ultimately lead to a normalization of Iran’s status as a signatory to the NPT. Furthermore, Iran, as part of its comprehensive safeguards agreement, commits in the nuclear deal to the ratification of the Additional Protocol, which is aimed at monitoring its nuclear activities within the limits of the NPT. Therefore, Iran’s exit from the NPT could be interpreted as a violation of the JCPOA, making the situation legally complicated.

Reza Nasri, an Iranian international lawyer based in Switzerland, told Al-Monitor, “In legal discussions a verb can be interpreted in many ways. For example, Iran’s exit from the NPT can be viewed as a countermeasure to the United States’ violation [of the JCPOA]. It is also a reversible measure that will be adopted merely with the aim of making the United States abide by its commitments as stated in the JCPOA. In other words, Iran’s intention to leave the NPT will not be to violate the JCPOA but to force the United States to return to it.”

Iranian officials have repeatedly maintained their commitment to the JCPOA, even with the absence of the United States. At the same time, as pointed out by President Hassan Rouhani on May 8, this continued commitment has been described as dependent on whether the European signatories can provide the necessary guarantees that Iran will enjoy the economic benefits outlined in the nuclear deal.

Azizollah Hatamzadeh, a Tehran-based foreign policy analyst, told Al-Monitor, “For now, Iran needs to showcase its relevance to the other side so that the other parties realize that any breach of commitment will have consequences. Basically, we need to change the equation to make the Europeans realize that if they do not take serious steps to save this agreement, it will have serious consequences. To achieve this goal, Iran’s threats need to be precise and credible. In my opinion, Iran can propose better measures than pulling out of the NPT. For example, it can make [implementation of] the JCPOA conditional through a legal amendment in its parliament." He added that there is the potential of a “step-by-step increase in uranium enrichment.”

There are, of course, those in Iran who do not think that everything is dependent on US policy. In an April 22 interview with Al-Monitor, Zarif said, “The Trump administration was never in the JCPOA. They made sure over the last 15 months that Iran would not benefit from the economic dividends of the JCPOA, and so whatever they do in three weeks would not be a major break from the past.”

Indeed, Zarif’s approach reflects the current path favored by the Iranian government, which is to shape policy dependent on how Europe reacts to the US withdrawal.

Nosratollah Tajik, a former senior Iranian diplomat, told Al-Monitor, “We signed the JCPOA with the intention of engaging with the international community. Meanwhile, Trump came to power with the slogan of 'America First.' Considering that the international community was our priority from the start, we need to make sure our words do not create fear so as to prompt others to line up behind Trump instead of standing up to him.”

He added, “At the same time, we signed the JCPOA to gain benefits; otherwise, it is a piece of paper with no value. If we feel those benefits no longer exist, naturally we will act in a different manner. For now, the European countries at least claim to be with Iran and not Trump in this path. Therefore, we have to try to keep Europe and countries other than the United States on our side as much as possible.”

As Iran and Europe engage in trying to find ways to guarantee that Tehran will receive its promised benefits, it is also worth noting that remarks made by Iranian officials in recent months indicate that they had anticipated Trump’s decision. Indeed, Zarif’s YouTube message May 3 showed that Tehran was still hopeful about the response of European signatories to the JCPOA to a US exit from the deal.

For now, only time will tell whether Europe will manage to save the deal. While there has been some pushback from Europe, including steps to revise the Blocking Statute as well as tough rhetoric about not being “vassals” of the United States, it remains to be seen whether Iran’s interests will be guaranteed in practice. If not, there will likely be a repeat of the circumstances surrounding the collapse of the 2003-05 engagement between Iran and Europe to find a solution to the nuclear issue.