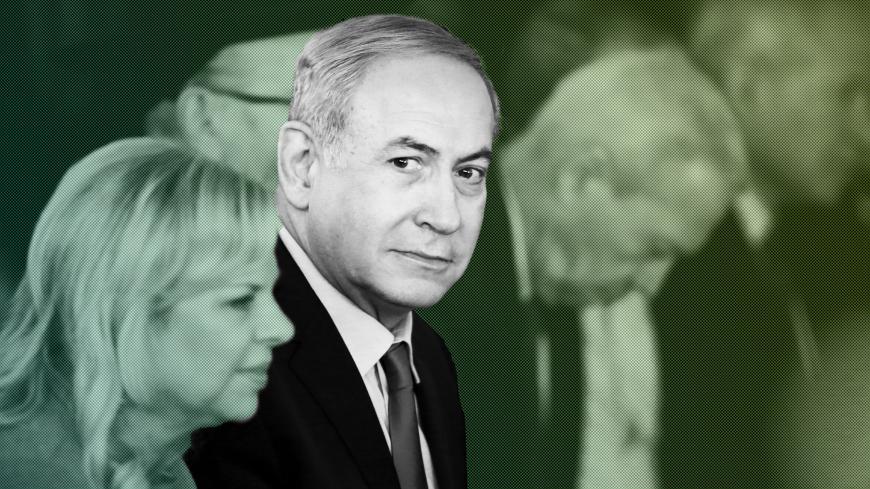 In response to the Feb. 13 police announcement of sufficient evidence to indict Prime Minister Benjamin Netanyahu on charges of bribery and breach of trust, Education Minister Naftali Bennett said, “Receiving gifts so extensively for so long does not meet the expectations of the citizenry of the State of Israel.” Polls conducted since then suggest that Bennett is wrong. According to a survey by the pollster Yossi Sarid for Reshet TV, although only 29% of Israelis surveyed believe the prime minister is innocent, more Israelis want him to stay in office than want him to resign or take time off, 49% versus 43% respectively.

An advance copy of Bennett’s speech distributed to reporters accused Netanyahu of accepting gifts from billionaires. “This is not the way to instill values in the young generation, and this is not the way we were taught,” it read. When delivering his speech, Bennett omitted this sentence. Successive Israeli governments, chief among them the current Netanyahu-Bennett government, have taught the country’s young Jewish citizenry that taking “gifts” consisting of tens of thousands of acres snatched from under destitute Palestinian shepherds and cave dwellers is nothing short of a national-religious-historical mission.

For more than 50 years — since the 1967 occupation of the West Bank — Israelis have had it drummed into them that no one would stand in the way of their state collecting more and more of these “gifts.” Neither Israeli law nor international law, neither the greatest power in the world nor Jewish morality, has prevented Jews from settling on Palestinian lands and enjoying the bounty of their natural and water resources. Even if Netanyahu manages to avoid prosecution in his “small” gifts affair — allegedly receiving benefits from businessmen — he will leave behind a legacy of the “major” gifts that he has distributed over his lengthy tenure.

Netanyahu has instilled a profound sense of entitlement in Israelis. Israel deserves to control another people because Israeli Jews are the only victims of the conflict with the Palestinians. Israelis deserve to settle in the heart of Palestinian lands because the Palestinians don’t want to make peace. Israel deserves to jail thousands of people without trial through so-called administrative detention, as it has done for decades, because their leaders want to throw Israelis into the sea. Israelis deserve to have dozens if not hundreds of nuclear bombs, according to foreign media reports, without international supervision because the Nazis annihilated 6 million Jews.

Speaking with Al-Monitor, political psychologist Daniel Bar-Tal says Netanyahu has succeeded in imbuing Israelis with a simplistic and dichotomous perception that totally negates all other views. He did so by making use of basic Jewish symbols and catchy language appealing to Jews. For example, he has referred to “a unified Jerusalem,” the Western Wall tunnels being the “bedrock of our [the Jewish people’s] existence” and the Jews as “the chosen people” and has invoked fate with “God willing.”

Bar-Tal, who has studied Israeli society for decades, compares Netanyahu to Roman and Byzantine emperors and to absolute monarchs and dictators from modern times. “They, too, surrounded themselves with mediocre ministers and advisers compared to whom he looks like a beacon shining in the dark,” Bar-Tal said.

In a June 2014 interview with Yedioth Ahronoth, Orit Galili-Zucker, a former Netanyahu media adviser, attributed the prime minister’s success to his ability to “constantly keep security on center stage on Israel’s agenda and constantly brand himself a supreme authority on this matter.” A poll conducted last year by Mina Tzemach for the right-wing Jerusalem Center for Public Affairs indicated that Israeli views on a solution to the Israeli-Palestinian conflict are driven by feelings of fear and insecurity. According to the poll, 57% of Jewish Israelis have adopted Netanyahu’s demand that a future Palestinian state be under full Israeli security control. An overwhelming majority, 71%, also backs Netanyahu’s position that agreement with the Palestinians is dependent on their recognition of Israel as the nation-state of the Jewish people.

The explanation for the contradiction between the public's belief about the police findings against Netanyahu and support for his continued tenure stems from those Israelis who are contemptuous of the Netanyahu family’s hedonism also being captive to the fear with which the prime minister has infused them. They fear another Holocaust, Iran’s nuclear weapons, a “Palestinian state which offers free land for terror,” threats by Islamist Hamas' leaders in Gaza, the missiles of the Islamist Lebanese Hezbollah militia, Israeli Arabs “coming out in droves to the polls” as Netanyahu warned on election day in 2015, and leftists who give Israel a bad name abroad. As Netanyahu told the hundreds of thousands of Israelis who protested the cost of living in 2011, life itself is more important that the quality of life. Many view Netanyahu as the elixir of Israel’s life. Accepting various gifts from rich business people falls under the heading of quality of life.

Israelis have also come to believe that the gifts they take for themselves in the West Bank and East Jerusalem are free of charge in the international arena. The prime minister shuttles among presidential palaces around the world, and foreign leaders seek his company. The last time Israelis paid for the gifts was in the early 1990s, when US President George W.H. Bush punished their right-wing government for refusing to freeze settlement construction. In response, Bush suspended $10 billion in US guarantees that Israel had requested to help absorb immigrants from the disintegrating Soviet Union.

These days, even as Israel continues to build houses for Jews in the settlements and to demolish the houses of Palestinians in the West Bank, President Donald Trump rewards him by recognizing Jerusalem as the capital of Israel. The punishment that awaits Netanyahu if he is tried and convicted of illegally accepting gifts will be far more severe than the punishment that he and his right-wing settlement friends are imposing on Israel’s citizens with their criminal land policies toward the Palestinians.

The police in Israel can recommend indicting a prime minister for accepting gifts from billionaires in return for promoting their business interests. The attorney general might be able to translate the recommendations into an indictment, and a court might even send a prime minister to jail. A recent amendment to Israeli law, the so-called Regularization Law, allows the taking of territorial “gifts” from Palestinians and bestowing them on their Jewish neighbors, in violation of the national strategic interest in ending the bloody conflict. This has been going on for more than 50 years under the auspices of law enforcement authorities, with the cooperation of successive attorneys general, with the blessing of the Supreme Court and the support of most Israeli citizens.