Netanyahu focuses in on new archenemy

The fact that Yesh Atid leader Yair Lapid is a key witness in one of the cases against Prime Minister Benjamin Netanyahu makes him Netanyahu’s most prominent political rival. 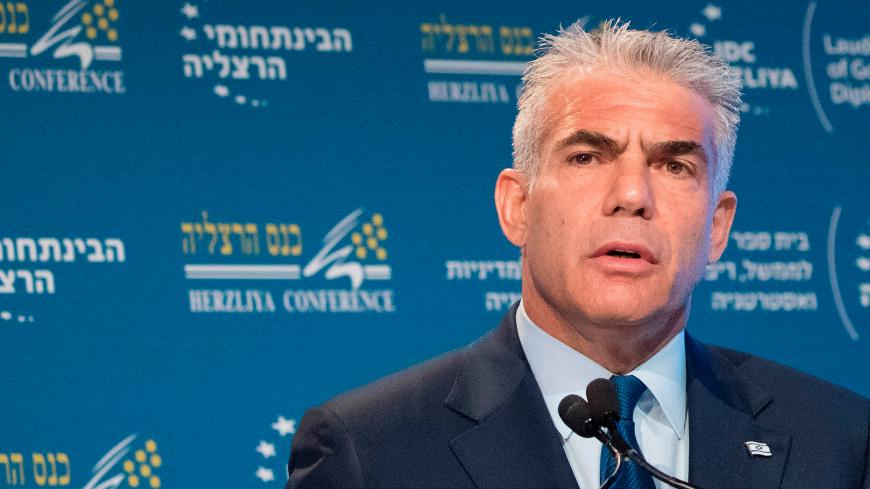 Israeli Prime Minister Benjamin Netanyahu and his team of lawyers were surprised this week when they learned that hidden among the evidence against Netanyahu was a surprise witness: none other than Yesh Atid Chairman Yair Lapid. According to the police, Netanyahu tried to persuade Lapid, who was the minister of finance in his previous government, to advance a law that would have granted Israeli billionaire Arnon Milchan tax benefits estimated to be worth tens of millions of shekels.

The Israeli Police recommended that Netanyahu be indicted for two separate cases of bribery. The publication about Lapid’s involvement in the case made it all the more dramatic. Not only is Netanyahu facing the fight of his life. It now looks like the person who could bring him down is his old finance minister, a man long determined to defeat his old boss and succeed him as prime minister.

This scenario seemed unimaginable until just two days ago. Now it has transformed Lapid into Netanyahu’s main rival minister. It could even shape the political system into a two-headed beast. Until now, Lapid and leader of the Zionist Camp Avi Gabbay competed over who would dominate the center-left bloc opposed to Netanyahu. Now Lapid has established himself as the front-runner.

Despite all of Tuesday evening’s commotion surrounding the recommendations, Netanyahu realized that the established order of things had changed and that Lapid had become his biggest problem. In a speech to the Center for Local Government on the day after the recommendations were released, Netanyahu was already attacking Lapid. He did what he had been so careful to avoid until then: saying anything whatsoever about the chairman of Yesh Atid.

Netanyahu’s strategy had always been to ignore Lapid in his speeches. He also did the same with Gabbay, increasing the sense that the opposition lacked a leader. While Netanyahu never accused Lapid of being a liar and pathetic loser, like the chairman of the coalition David Amsalem did with typical aplomb, he “exposed” him as a biased witness and laid the infrastructure for all sorts of conspiracy theories.

“The whole world is upside down in the case of Lapid too,” Netanyahu complained to the heads of the local authorities. “Lapid said that he was interrogated for about an hour. Meanwhile, they only asked me a few questions about this, and I told them that I did nothing to benefit Milchan. … Lapid seems to hold the key [to the investigation], the same Lapid who declared that he would bring me down and who is a close friend of Milchan and was hired by him. … As finance minister, he discussed Milchan’s affairs with Milchan. … So now he’s a key witness? Had I done that, I would have been interrogated under caution seven times. But the world has been turned upside down. I got recommendations and Lapid got applause.”

Netanyahu was feeling encouraged when he arrived at the Center for Local Government’s event. He looked much more at ease than he did during a speech he gave the night before at his home on Balfour Street. After all, he just got through a critical political test. His coalition remained stable, no one quit, his Likud ministers gave him their unanimous support, and the supposed weak link in the coalition — the chairman of Kulanu, Finance Minister Moshe Kahlon — did not call on him to resign.

Furthermore, because of the heated events, the state budget for 2019 received almost no coverage even though it passed its first reading that same night with no major crises. Traditionally, the approval of the state budget is a major political event, which proves the power of the coalition. The more the budget is challenged, the more likely the coalition is to fall apart. In this case, the very fact that the budget passed so easily proved that Netanyahu arrived at this volatile moment prepared and strengthened politically. This gives him months of breathing room as prime minister, perhaps even until the end of this term.

Lapid has yet to really take off, at least according to these polls. On the other hand, he has already established himself as Netanyahu’s opponent in the fight for the prime minister’s office. By revealing Lapid to be a key witness in Case 1000 (in which Netanyahu is accused of receiving benefits from businessmen), the police recommendations gave substance to the upcoming political battle. Netanyahu, who is drowning in corruption charges, will face off against Lapid, who will do everything he can to portray himself as a gallant knight fighting on behalf of the rule of law. Lapid was quick to dismiss attacks against him as “the talk of criminals.” As he explains it, he did what any law-abiding citizen would do when asked to give testimony to the police.

The chairman of Yesh Atid has been working hard to win Likud voters over to his party, believing that the seats they bring with them will be the tiebreaker between the two blocs in the next election. To do this, Lapid has distanced himself from the left as if it was some fatal disease. He also signaled to the right with all sorts of dog whistles and has even tried to ingratiate himself with the ultra-Orthodox. Now that Netanyahu and the Likud are portraying him as a snitch who ran to the police in an attempt to bring down the right-wing government, it is not at all certain that Lapid will succeed in Likud strongholds. That is why Yesh Atid made a point of explaining that Lapid did not initiate his meeting with the police. He was simply summoned to give testimony, so he did what he was supposed to do.

Regardless, now that the police recommendations have been released, on Tuesday night, Netanyahu had launched the next round of elections. According to most observers, these will be held in early 2019. This assessment is based on the fact that it will take many long months from the time that the police recommendations are handed to Attorney General Avichai Mandelblit until he actually decides whether to indict Netanyahu and for what.