With the Islamic State defeated in Iraq and Syria, parents and relatives of European women and children who joined members of the terrorist organization there are calling on their governments to help facilitate the return of the children to their home countries. 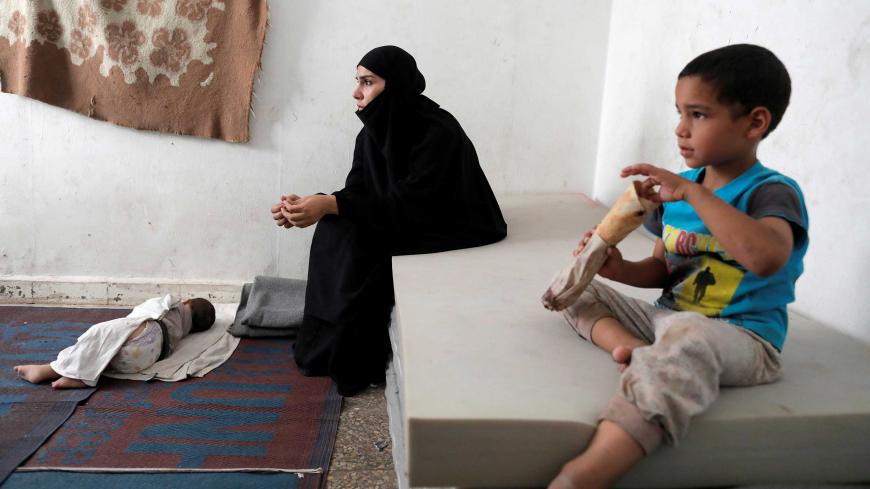 The wife of a former Islamic State fighter is pictured with her children at a camp for displaced people in Ain Issa, north of Raqqa, Syria, Aug. 7, 2017. - REUTERS/Zohra Bensemra

AMSTERDAM — People had told Houssein throughout his life that there is nothing more beautiful than becoming a grandfather, but now when he sees a grandfather walking down the street with his grandchildren, he only feels aggrieved over his own loss. Houssein's grandchildren are among the hundreds of European children born in Iraq and Syria in areas formerly controlled by the Islamic State (IS). He has never seen them.

“What did they go through? Do they need medical care? Do they have enough food? These are questions that are constantly going through my mind,” Houssein, a Dutch citizen of Moroccan descent, told Al-Monitor. “My daughter might have made a barbaric decision by joining a terrorist organization, but her children did not have a choice. They were simply born in the wrong place.”

Houssein, who asked that his last name and place of residence be withheld for fear of reprisal by IS supporters, lost half of his family to the extremist organization. In early 2013, his daughter, Meryem, left the Netherlands to accompany her radicalized boyfriend to Syria. Houssein’s ex-wife kept in contact with her daughter, and Meryem eventually persuaded her to join them, in August 2014.

Houssein’s ex-wife took their son Ilyas, 14 at that time, with her. He was killed a few months after arriving in Syria, when coalition forces targeted an IS weapons depot in Tell Abyad, where Ilyas worked as a guard. Houssein lamented, “A grave to mourn, a last kiss on my son’s forehead, even an answer from his mother to the simple question why. IS took everything from me.”

Meryem gave birth to two girls who are now 4 and 2 years old. Houssein had no illusions of ever seeing his grandchildren, but when IS' self-proclaimed caliphate collapsed, he felt a small glimmer of hope. Though uncertain, he has good reason to believe they are being held in a camp for wives of IS fighters.

Media outlets reported that with IS as good as defeated in Syria and Iraq, hundreds of foreign wives, most of them widows, and children of suspected IS combatants are being held in camps by the Syrian Democratic Forces, such as at Ain Issa, in Syria. Many of them had expressed their desire to return to their home countries, often complaining that they only did housework or had been lured by IS fighters into a lifestyle or situation they came to regret. Some foreign women are awaiting trial in Iraqi jails or remain on the run in the few areas the terror group still holds.

The foreign women associated with IS and their children present a big challenge to European nations, because most governments, including the Netherlands, do not actively help IS jihadis return home. The wives and children of IS fighters must travel to their country's embassy in Turkey, Jordan or Lebanon, but this is almost impossible, since they no longer have travel documents. Even if they did have papers, they are not being allowed to leave the camps or prisons where they are being held without mediation from their home countries, many reports show.

According to Daan Weggemans, a terrorism researcher at the Institute of Security and Global Affairs at Leiden University, most governments are not actively repatriating children and women because by joining IS and other terrorist organizations, they have become a security risk.

“Children are the victims here,” Weggemans told Al-Monitor. “They were taken to Syria by their parents, sometimes with false claims, like that they were going on a holiday. Others were simply born in the Islamic State. Ideally, European governments only repatriate the children who were taken or born over there. However, they cannot just say, 'Let’s take back the children and leave the mothers there.' This is not likely going to happen, due to several humanitarian and legal reasons.”

From 2014 to 2016, IS is believed to have recruited and trained more than 2,000 boys between the ages of 9 and 15 as “cubs of the caliphate.” “Even if they weren’t trained, they may have memories of living in a war zone,” Weggemans said. “Investigations show that even the youngest children are affected by it. It is a very sad story.”

What about the children who were born in Syria and Iraq? In December 2017, the Belgian Council of Ministers decided that Belgian children under the age of 10 will automatically receive laissez-passers to come to Belgium if DNA research confirms that they are descended from Belgian parents.

The Dutch Children's Protection Service is taking a similar approach. “Parents must go to a foreign affairs post so that DNA material can then be collected to determine if they have a Dutch parent,” a spokesperson told Al-Monitor.

Belgium IS expert Pieter van Ostaeyen questions the practicality and feasibility of this regulation. “It all depends on the efforts governments are willing to take,” Van Ostaeyen told Al-Monitor. “It is currently not clear where European fighters, and therefore their families, are located. The security situation on the spot can also vary enormously from area to area. It is a bit strange to think that children under the age of 10 can just go to an embassy in Turkey. How are the diplomats going to arrange that? How are we going to trace them? Nobody knows.”

Van Ostaeyen also noted that many European countries do not have extradition agreements with Iraq and Syria. Nevertheless, it seems that some European governments are slowly starting to take action. In late December, three French-born children belonging to suspected IS militants and who were being held by Iraqi authorities were flown back to Paris. Their father was killed in the battle for Mosul, and their mother and her youngest child remain in detention in Iraq. It was the first such repatriation of French children from Iraq.

Houssein and parents of Dutch jihadis feel that the government is not doing enough and hope that more will be done in the future to get women and children back from Syria and Iraq.

“We do not ask them to send an airplane, but only to contact the camp leaders in Syria,” Houssein said. “Now, the Netherlands is trying to look away and pretend it doesn’t exist, but looking away won’t solve the problem.”

He added, “Once they are back, you can prosecute the parents. The caliphate might be destroyed, but the IS ideology is still alive. Therefore, it is better to take control instead of letting them wander around without knowing where they are or what they are up to. That might be very dangerous, especially when it comes to Europe, where you can travel through dozens of countries without border control.”

Lodewijk Hekking, a spokesman for the Dutch Ministry of Justice and Security, told Al-Monitor that there are no plans to repatriate the approximately 80 children taken from the Netherlands as well as those born abroad. This could change if the government decides on a shift in policy. “Currently, that is not the case,” he said.

Houssein looks at photos of Ilyas at least three times a day. He is afraid he will forget what he looked like. He already has difficulty remembering how he sounded.

“I have already lost my son and my daughter, even though she is still alive,” Houssein remarked. “Please help me bring my grandchildren to the Netherlands. They belong with me.”