Turkey pays homage to 'ceramicist for the people'

The "Fureya Koral Retrospective" in Istanbul shows how a pioneering artist reinterpreted ceramics, a traditional Turkish craft, to create murals in the new republic. 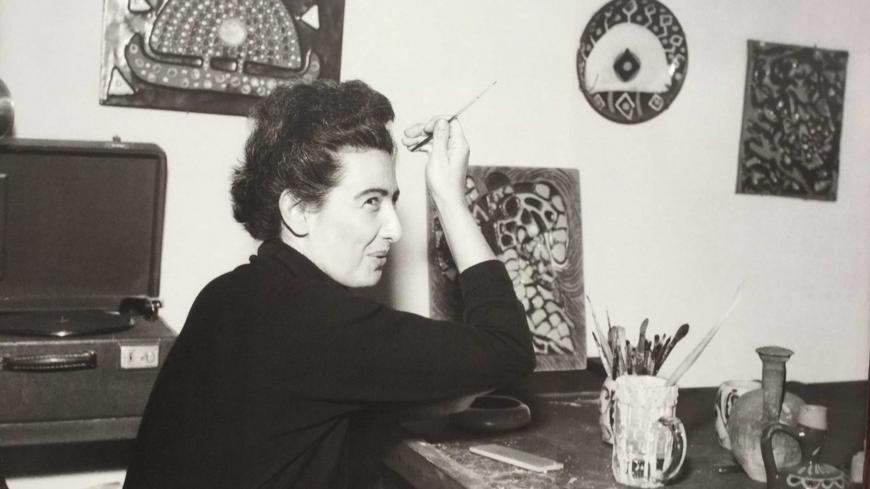 Fureya Koral, known as Turkey's first female ceramicist, is being recognized with a retrospective in Istanbul, Turkey. - Provided by Kale Industries

“I want to make china plates that will be used at the houses of the poor … and coffee cups for traditional coffeehouses. I want what I make to be [everywhere], in houses rich or poor, beautiful or ugly, in old and young hands.” So said Fureya Koral, often called Turkey’s first female ceramicist, in an interview with Milliyet Sanat in 1993, four years before her death. “Art should not be imprisoned in museums. That would kill it.”

Although these words became the signature of the aristocrat who wanted to make ceramics for the poor, her wish went unfulfilled. Fureya’s work — tiles, plates, ceramic-framed mirrors and ceramic-top tables — have essentially remained collector’s items. In 1973, she collaborated with the Istanbul Porcelain Factory to launch a tableware set signed “Fureya,” as she was called on the art scene, but the line was discontinued within a year after a limited production run. The factory was never able to produce the creamy white the artist demanded.

Today, this pioneering artist is being recognized with the “Fureya Koral Retrospective Exhibition” at Siraevler 16, the maze-like art space in Istanbul’s chic Besiktas district. Sponsored by Kale Industries, this largest-ever show on her life and work consists of 200 pieces of art, documents and photographs and marks the 20th year of the artist's death and the 60th anniversary of Kale, the owner of Canakkale Ceramics, a tile and ceramics company.

Curators Karoly Aliotti, Nilufer Sasmazer and Farah Aksoy emphasize that the exhibition focuses more on Fureya’s art than her stormy life. That said, it is Fureya’s multicultural life and her artistic family that inspired her style, combining Turkish mores with Western art, as in her ability to take traditional hues of Turkish ceramics and reinterpret them in designs vaguely recalling Vincent Van Gogh's “Starry Night.”

Fureya was born into privilege and drama in 1910, during the final years of the Ottoman Empire. She was the granddaughter of an Ottoman diplomat and the daughter of Emin Koral, a classmate at the Military Academy of modern Turkey’s founder, Kemal Ataturk. When she was 4, Fureya's grandfather, Mustafa Shakir Pasha, was shot by her uncle, later to become a great Turkish writer under the nom de plume Halikarnas Balikcisi. Both her aunts, Fahrelnissa Zeid and Aliye Berger, were artists.

Taught by nuns at Istanbul’s Lycee Dame de Sion, Fureya was fluent in French. She was musical and, like most girls of her social class, was expected to marry into one of Istanbul's aristocratic families. Instead, she chose her own husband, a landowner from the city of Bursa. The marriage proved to be short-lived, filled with domestic violence and philandering by her psychologically troubled spouse. Fureya's second marriage, to Kilic Ali, a top Ataturk aide, also failed.

After Fureya was diagnosed with tuberculosis in the 1940s, Kilic Ali had sent her to an expensive private sanatorium in Switzerland, and there, struggling for her life, Fureya first began to draw. She also began “playing with Plasticine and [later] soil,” brought to her by her aunt, the painter Fahrelnissa Zeid.

After her stay at the sanatorium, Fureya relentlessly pursued a career in ceramics, along the way becoming one of the first modern Turkish artists to explore the link between ceramics and contemporary architecture, designing ceramic murals for public buildings. The rich and poor, young and old, have come to enjoy her three murals at Ataturk's mausoleum, in Ankara, and the Ziraat Bank and Manufacturers’ Bazaar, in Istanbul, in part fulfilling her wish to reach everyone.

“We tried to reconstruct the artistic life of Fureya as chronologically as we could,” curator Aliotti told Al-Monitor in a response to questions submitted by email. “We start with her drawings that date to her days at the sanatorium in Switzerland. Then there are the lithographic works she made during her stay in Paris [in the early 1950s]. We have in the exhibition the plates and small murals, on which she used motifs from nature, a theme that is recurrent in her earlier works, before she moved to more abstract and expressionist forms.”

Among the various works on display by this late-blooming artist are ceramic tops for tables made for the Turkish parliament and the Hilton Hotel along with cups and small murals now in private collections. There are also small decorative, ceramic houses and ceramic birds, as well as “The Walking People,” a later work of small terra-cotta figurines known for “their empty eyes,” a Turkish expression for unwitting or unmindful people.

Fureya's larger murals are represented in detailed photographs, along with a large map showing their locations in Ankara and Istanbul. “Hopefully, this will encourage the viewers to see them,” Aliotti said. One of the photos at the exhibit shows Fureya, with short, steel-gray hair and wearing a pair of baggy pants, climbing a makeshift ladder to put the finishing touches on a mural as a construction worker looks on in disbelief.

“The myth around Fureya often focuses on her wealthy and enigmatic family, her birth in the Sakir Bey Kiosk on the Prince Islands, with one of her aunts being an Iraqi princess,” Tuzum Kizilcan, a student of Fureya and one of the best-known living ceramicists in Turkey, told Al-Monitor. “But this is only one part of the narrative. Fureya was no longer rich in her 50s and 60s. She had to work on hotel projects and on murals to make a living.”

The 1950s and 1960s were a crucial phase in Turkey’s ceramics industry. The country, with a long tradition of ceramics, was home to only a few ceramicists who had kilns in which to produce their works. “This was a time of debate, whether ceramics was an art or a craft,” Alioti noted.

At the Nov. 17 opening of the retrospective, Kizilcan delightedly pointed out the cups and saucers. “Those are the works I am familiar with,” he said, recalling his time as a student at Fureya’s studio in 1959.

“She was very, very disciplined,” Kizilcan mused. “We worked hard, but once it was done, we talked, planned and exchanged ideas. It was a very intellectual and stimulating setting.”

Fureya’s small studio lured various gallerists and writers, among them Yashar Kemal, Ahmed Hamdi Tanpinar and Ferit Edgu. She also taught and mentored artists, including Alev Ebuzziya and Candeger Furtun, whose work of nine pairs of disembodied male legs was one of the strongest pieces at the 2017 Istanbul Biennial.

“Fureya was an inspirational artist who combined tradition with innovation,” Zeynep Bodur, CEO of the Kale Group, said at the exhibition opening. “We wanted to bring her legacy to a large audience, to show her work to the new generations and to inspire new Fureyas in Turkey who will also help design ceramics that go beyond museums and into everyday life.”

The Kale Ceramics Foundation will be offering scholarships to young women pursuing studies in the arts, Bodur said. A book on Fureya, small Fureya-themed notebooks and a cup and saucer based on one of her designs are being sold at the exhibition, with the money raised going toward the scholarship fund.