Parchment down to last maker in ancient Turkish birthplace

Parchment, the game-changer in the ancient library war between Alexandria and Pergamum, is at risk of extinction in modern-day Bergama, where an 85-year-old man is the last surviving craftsman. 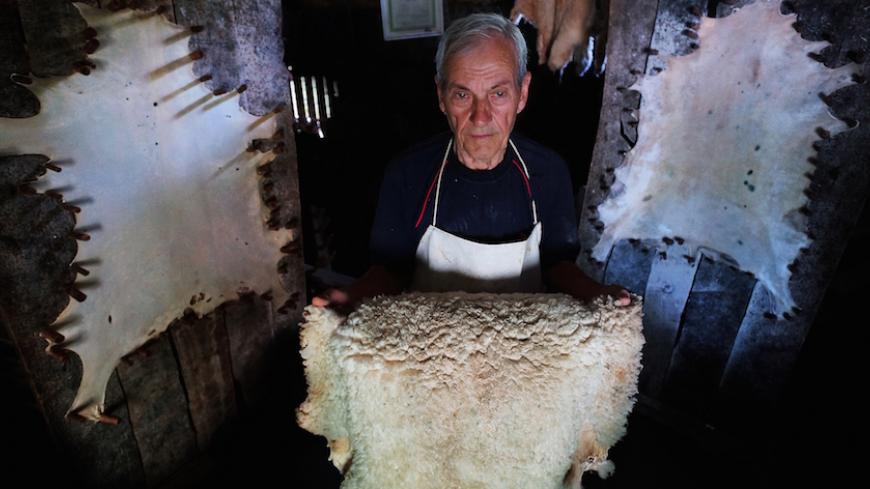 Ismail Arac, the tanner of Pergamum, poses before goat skins that he will use to make parchments in this undated photo. - Bergama Municipality

During the second century B.C., there was a major rivalry between two of the great libraries of the time — the Library of Alexandria in Egypt and the Library of Pergamum on the Aegean coast of what is now Turkey. Hoping to quell the growth of the younger but ambitious library, which had about 200,000 books, Egypt’s King Ptolemy stopped the exportation of papyrus.

Pergamum’s King Eumenes II responded by promising a substantial reward for anyone who found a way to replace papyrus. Grammarian and scientist Krates from Sardis, who served as the director of Pergamum Library, came up with a substitute. He presented the king with a substance made of goat skin that had been stretched and dried. They called it "Pergaminae Chartae,'' which later become "parchment." Less fragile and more durable than the papyrus, the new tool of writing quickly gained dominance outside Anatolia. Early Bibles and Qurans were written on parchment, as the present-day residents of Pergamum like to boast.

Ironically, in Pergamum, placed on UNESCO’s World Heritage List in 2014, there is only one man who keeps up the tradition of parchment-making.

Drawings, water colors and gouache paintings on parchment adorn the walls of Macit Gonlugur's small shop in Bergama, the Turkish name for Pergamum.

Gonlugur admitted that he took no interest in parchment until 2005, when he became the chairman of the Bergama Culture and Art Foundation. Once he took over the post, the various proposals to revive parchment-making that crossed his desk showed him the potential of Bergama’s traditional craft. He headed for Istanbul to discuss with artisans whether small touristic gifts could be made of parchment, but he returned empty-handed and angry that all the parchment there was machine-made.

Just as he was about to give up, he met another native of Bergama, Ismail Arac, known locally as “the last black tanner” or simply “Master Ismail.”

When Gonlugur asked Arac what he did with the goat skin he collected, Arac replied that he used it to make drums to sell in Atmaca, a neighborhood in Bergama where musicians lived. “Looking closer, I saw that what he called the skin used on the drums was, in fact, parchment,” Gonlugur told Al-Monitor. “I just told him that he should stop making drums but slightly refine the goat skin and make it into parchment. I assured him that I would buy all that he produced.”

The next step was to bring local painters and calligraphers together and ask them to use Arac's parchment as canvas for their work.

“But the task of rebreathing life into the ancient craft of parchment was not something that would happen overnight,” explained Gonlugur.

As Arac, 85, adheres to the old methods of making parchment, a single sheet takes 22 days of labor in his electricity-free workshop, where everything is done by hand. When the goat skins arrive, they first soak in water for two days to rid them of grime and blood. Then Arac soaks them in a lime solution to remove the hair. He said that the introduction of lime was relatively recent — the traditional way was to use dog excrement for the hair-removal process.

Once the lime takes off most of the hair, Arac places the skin in a milder lime solution. Once they are finally finished soaking, he scrapes them with a tool called a “kavaleta.” Arac then hangs up the wet skins and uses another knife to scrape them even thinner. Then he places them on wooden hangers to dry. The process is laborious and the smell from the skins overpowers the small shop.

From Ismail Arac’s workshop, the parchments are sent to Gonlugur’s shop. From there, they are distributed to the artists in Bergama and other cities, particularly Istanbul.

Besides the numerous calligraphic works and the paintings on parchment, there is one use that is deeply engraved in the history of Pergamum: the Hippocratic oath. Just as famous as the Library of Pergamum is the Asclepion, a sacred site that takes its name from the healing god Asclepius, son of Apollo in Greek mythology.

Psychiatrists and psychotherapists from around the world come to Asclepion every year in May for a symposium held in tents. At the end, each is given a copy of the Hippocratic oath printed on parchment.

The tourists who stop over at Pergamum as part of their tours of the Seven Churches of the Revelation love to buy parchment maps. When it holds official ceremonies, the city council honors the participants with parchment certificates.

However, the ancient town, which hosted 700,000 tourists last year, has suffered along with the rest of the country from a decline in tourism. The drop in tourists, among the chief buyers of parchment gifts, add to the new generation's reluctance to learn this art, as they wonder how their painstaking work will end up being used.

Gonlugur complains that foreigners appreciate this ancient craft more than the Turks. “The Americans who come to the shop ask for parchments, the Italians come in and ask for ‘la pergamena,' but when Turks come, they ask whether this is oil paper,” he complained. “There are even those who think this is a tattoo shop.”

“I have tried teaching my craft to the new generation twice in the last 11 years,” said Arac. “But they have chosen different paths.”

For Gonlugur, the only way to rescue the dying craft is through subsidies from the Ministry of Culture, but his efforts have not yet borne fruit. “Of course, we will not let this local craft die,” he said, but the future of parchment looks grim if none of the local young people want to commit to it.