Rouhani: We must not get caught in US ‘trap’

In reaction to new US sanctions, Iran’s president has urged domestic friends and foes against falling into Washington’s "trap." 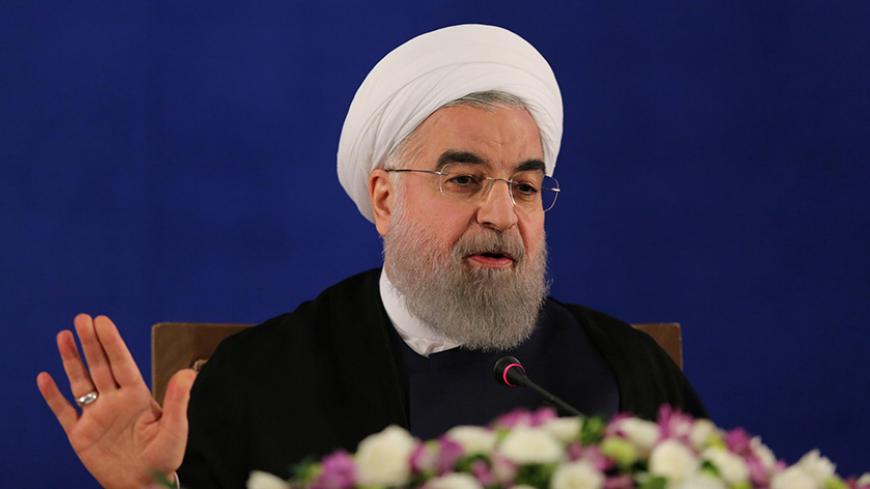 Iranian President Hassan Rouhani, reacting to new US sanctions against Tehran over its missile program and alleged support for terrorism, said Iran should be alert and refrain from acting to the benefit of Washington.

On July 18, the US departments of Treasury and State announced that they were targeting 18 Iranian individuals, groups and networks.

Mentioning US President Donald Trump’s decision to withdraw from the Paris Agreement and a deal with Cuba, Rouhani said in a televised Cabinet meeting July 19, “This indicates that the US cannot claim advocacy for human rights, rule of law, and security and stability in the world." He added, “One who is not stable, does not respect the law and regulations, and does not stand by its own signature cannot invite others to stability, security and peace.”

Stating that Tehran’s commitment to the Joint Comprehensive Plan of Action (JCPOA) — which was signed in 2015 between Iran and six world powers — will continue, Iran’s president said, "Iran will always stand by its international commitments, although the Americans are giving with one hand and taking away with the other."

He said that on the one hand, the US government has reported that Iran has met its commitments and that therefore US officials "have no choice but to respect the JCPOA and they cannot violate it. On the other hand, they are ... imposing new sanctions, which is not compatible with the letter and spirit of the JCPOA."

Implicitly referring to Iran's own opponents of the deal, Rouhani continued, “We must be vigilant not to get caught in their trap, not playing on the US side of the pitch and at the same time live up to our commitments, walking on the path of progress."

Expressing his content with European and Asian members of the six world powers for not joining Trump, who has vowed to tear up the deal, Rouhani said, "We are happy that our allies in the 5+1 have stood by the JCPOA, protecting it so far, and that Americans have acted equivocally like always. But certainly, if Americans want to impose sanctions against us under any condition and pretext, the great Iranian nation will respond accordingly and Iran’s parliament will also pass bills." Of note, on July 11, during a joint press conference with Russian Foreign Minister Sergey Lavrov, European Union foreign affairs chief Federica Mogherini reacted to talk of the possibility of the United States' abandoning the JCPOA: “The nuclear deal doesn't belong to one country; it belongs to the international community," said Mogherini, adding, "We have the responsibility to make sure that this continues to be implemented."

Rouhani also said, "We will not pass over US violations of the JCPOA, and we will stand against them. But at the same time, we are alert as to how to make the best use of the atmosphere." Of note, on July 18 Iranian lawmakers passed a bill that designates US military forces and intelligence services as supporters of terrorist groups in the Middle East.

In other news, the commander of Iran's Islamic Revolutionary Guards Corps (IRGC), aerospace force Brig. Gen. Amir Ali Hajizadeh, disclosed new details about the IRGC’s June 18 missile attack on “terrorists” in the Syrian town of Deir ez-Zour, which is held by the Islamic State (IS).

Hajizadeh said July 18, “When we wanted to target Daesh [IS] positions, we asked [Quds Force commander] Gen. [Qasem] Soleimani to present us with the targets. He immediately pinpointed 60 positions and told us to target whichever you want.”

Hajizadeh added, “When the first missile hit the target, I was in the command room, and I saw from the monitor that the first missile hit [the target], but we suddenly saw excessive fire emerging from three points of the target. I told the officer that I ordered the launch of one missile. He said that we fired one missile, but the missile precisely hit the target, and Daesh’s underground base was situated under that target, and that base was burned.”

He also said a number of Chinese members of IS were killed in the IRGC missile attack.

Hajizadeh also said the IRGC had conducted a missile attack against IS some four to five years ago, but gave no further details.