Iran ready to work with Interpol over 1994 Argentina bombing

Iran expressed readiness to start talks over its alleged involvement in a 1994 bombing in Argentina. 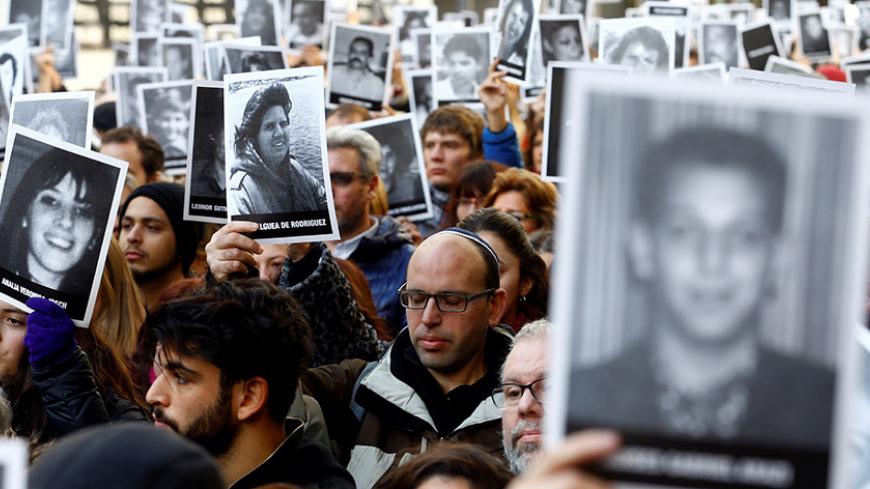 People hold up pictures of the victims of the Argentine Israelite Mutual Association bombing during a ceremony to mark the 22nd anniversary of the 1994 attack that left 85 dead, Buenos Aires, Argentina, July 18, 2016. - REUTERS/Enrique Marcarian
Arash Karami
@@thekarami
July 11, 2017

Iranian Deputy Foreign Minister Abbas Araghchi said his government is ready to work with Interpol to resolve a dispute over a 1994 bombing in Argentina that targeted a Jewish center for which Iran was blamed.

According to Iranian media, Jurgen Stock, the secretary-general of Interpol, met with Araghchi in Tehran July 10 to discuss cooperation and expanding ties with respect to counterterrorism and drug smuggling. Araghchi said Iran is ready to work with both Interpol and an Argentine delegation to resolve the case of the bombing of the Argentine Israelite Mutual Association in Buenos Aires. Araghchi reiterated Iran’s position that the case has been pursued by those with “political interests,” particularly blaming Israel of influencing the case.

The bombing that killed 85 people and injured hundreds has been marred by incompetence, intrigue and corruption from the beginning. The first case focused on a local connection that even implicated police officers. In 2003, all 22 defendants in that case were found not guilty.

In 2006, Argentine prosecutor Alberto Nisman officially accused top Iranian government officials of using Hezbollah operatives to carry out the bombing. Nisman’s case was largely built by testimony of defectors. While the United States continued to believe Iran was behind the bombing, an FBI official involved in the investigation did not buy the testimony of the main defector. A number of motivations were attributed to Iran for carrying out the attack, such as Argentina pulling out from a nuclear agreement with Iran over US pressure and retaliation against Israel for an attack on Hezbollah months prior.

In 2015, after 10 years of work on the case, Nisman was found dead in his apartment hours before he was to appear in front of Argentine congress to discuss his findings accusing Argentina’s government of working with Iran in a cover-up, an argument he had previously made public.

Interpol accepted Argentina’s case to put a number of Iranians on its most wanted list in 2007. Interpol’s bylaws prevented it from putting top officials such as former President Ayatollah Akbar Hashemi Rafsanjani and former Defense Minister Ahmad Vahidi on the list. Mohsen Rabbani, who was a cultural attache in Argentina, and a number of others were put on Interpol’s list.

Iran and Argentina had announced a joint agreement to resolve the case under the previous government of Cristina Fernandez de Kirchner. That agreement, which was criticized by Israeli and Jewish groups in Argentina, was voided by the new government in 2015.

The spokesman for Iran’s Foreign Ministry, Bahram Ghassemi, also announced July 11 that Iran’s hajj pilgrims will have access to consular services. Given that Iran and Saudi Arabia do not have diplomatic relations, this is an important development for Iranians wishing to participate in hajj. Iran and Saudi Arabia broke diplomatic relations after Iranian protesters broke into the Saudi Embassy following the execution of a prominent Saudi Shiite cleric. During last year’s hajj, hundreds of Iranians were killed in a stampede. Iran accused Saudi officials of neglect and incompetence.