Turkey is growing increasingly angry because foreign individuals, including some from the United States, are joining the ranks of Kurdish forces in Syria. 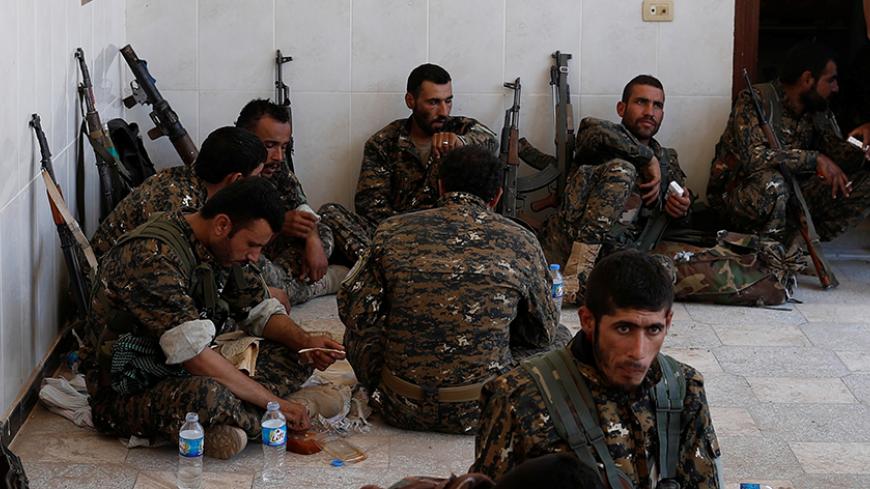 A Turkish report about foreigners, including Americans, joining Kurds in Syria to fight against the Islamic State (IS) is attracting lots of media attention. The Turkish government fears these "non-Salafi/jihadi foreign fighters" might be strengthening the Kurds' war within a war: the effort to create a Kurdish state while simultaneously battling IS.

The report, prepared by the Turkish Police Academy and released in May, also warns that these fighters — who aren't necessarily motivated by religious or financial goals but rather by ideology — eventually will return to the West and pose as much danger as "radical 'Islamist' returnees."

The US government supports the Syrian Democratic Forces (SDF) in the war on IS. However, the SDF alliance includes the Kurdish People's Protection Units (YPG) and the Kurdish nationalist Democratic Union Party (PYD) — Syrian offshoots of the Kurdistan Workers Party (PKK) in Turkey. The PKK is considered a terrorist group by Turkey, the United States and the European Union.

The report, titled "PKK's Regional Franchise of Terror," says more than 400 non-Salafi/jihadi foreign fighters, both men and women, are fighting for the YPG. The report says the PKK’s regional terror network is being supported by Marxist, communist and social anarchist Western fighters, constituting a new element of multinational crime and terror links.

"Scores of Marxists and anarchists of all stripes have found a refuge by association with the PKK and its regional franchises in the name of fighting [IS]," the report says. "These … revolutionaries fighting alongside the PKK and its franchises at the moment will sooner or later return to Europe and the US with many criminal connections, acquaintances, tools and dangerous ideas in their minds and backpacks."

Another theory much discussed in Ankara and also referred to in the report is that for the PKK, a Kurdish state is not a final goal but an instrument to advocate international socialism. The report says, “The projects that contradict PKK practices but are still kept on the agenda with glorified expressions of ‘democratic autonomy’ and ‘democratic confederalism’ are meant to inspire leftist movements in the region and beyond."

Erol Bural, a terrorism expert at Ankara think tank 21st Century Turkey Institute, told Al-Monitor that, parallel to the growing IS presence — in particular during the September-November 2014 siege of Kobani — the number of foreign fighters joining the YPG increased substantially.

“These people are called volunteer fighters, freedom fighters or legionnaires," he said. "Western countries only see the extreme Salafi networks as a security issue and refrain from any legal action against Americans and Europeans joining the YPG. Sadly, I must admit we don’t have adequate data and scholarly research about the foreign fighters joining the YPG. But we are aware that since 2014, the YPG has been pursuing a strategy of recruiting by inviting foreigners to Syria via the internet and social media."

Bural continued, "Today in social media you will find Lions of Rojava accounts along with a multitude of propaganda platforms in English designed to appeal to Americans and Europeans. They are organizing under the label of the International Freedom Battalion, inspired by the Abraham Lincoln Brigade of the Spanish Civil War. You can find ample reports in the open media about hundreds of people from the United Kingdom, the US, Canada, Australia, Germany, Italy, Denmark, Greece, Finland, France and China signing up with in the PKK/PYD as an outcome of this social media campaign.”

According to media reports, more than 50 Americans from 31 states, mostly from Texas, are fighting in YPG ranks. These Americans, mostly with military backgrounds, were motivated to join the YPG out of anger against IS' brutal treatment of Christians. Others were looking for adventure or motivated by radical revolutionary ideologies and a general dislike of US policies.

Now the issue debated is whether these foreign fighters joining the YPG should be considered terrorists. This question overlaps with the question of whether the YPG itself is a terrorist outfit.

According to Ankara, UN Security Council Resolution 2178 defines "foreign terrorist fighters" as those who have transferred from another country where they were residents or nationals; taken part in an entity defined as a terror group by Turkey; or received armed and ideological training from the PKK/PYD.

It’s well-known that the Kurdistan Regional Government (KRG) in northern Iraq does not want the PKK to become a global brand and center of attraction. The KRG applies stiff policies against foreign fighters in the YPG ranks and has deported many of them.

For citizens of the United States, United Kingdom and Canada, it is not against the law to join a foreign armed group if the group isn’t on the terror list, doesn’t commit a war crime and isn’t implicated in a criminal offense.

In some countries, such as Belgium, Denmark, Switzerland and Austria, it is a crime to participate in armed clashes for ideological reasons in another country. Recall the long saga of Joanna Palani, a Dane who in 2016 fought first in the KRG peshmerga forces and then in YPG ranks against IS. She was arrested on her return to Denmark and jailed.

A scrutiny of media reports, however, points to confusion among officials of the countries whose nationals are fighting in the YPG ranks as non-Salafi/jihadi fighters. A British national complains that although he did nothing against UK laws, he was detained by police and his passport, laptop and phone were seized. In Belgium, some YPG foreign fighters manage to avoid legal proceedings even if they narrate their experiences on social media.

We are therefore facing the grim reality that governments no longer hold a monopoly on war-making: Now, anyone in one country can declare war via social media against an armed group in another country as a matter of personal choice.