Migrant domestic workers in Lebanon are not protected by labor laws, but a new website hopes to give them a voice to speak out against abuse. 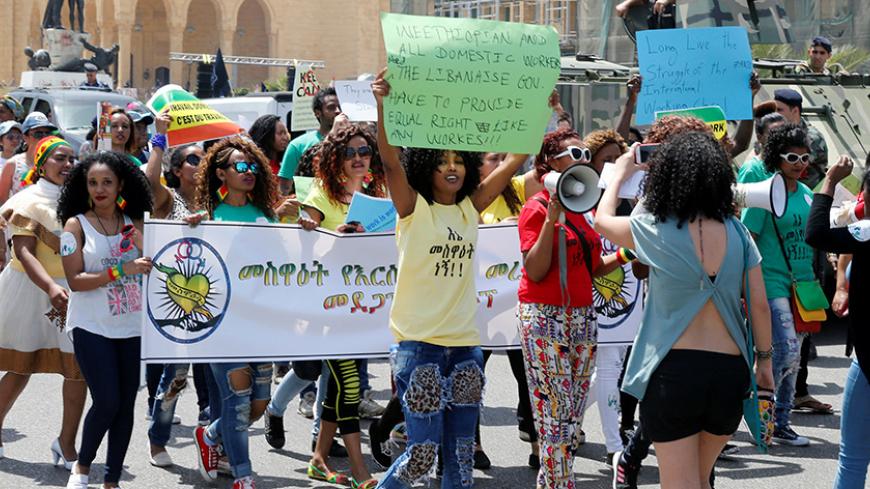 This year on International Workers' Day, on May 1, domestic migrant workers demonstrated in the streets of Lebanon, protesting their lack of rights. That same day, Dipendra Uprety launched the website This Is Lebanon to gather the testimonies of domestic workers and their families. Domestic workers have no rights in Lebanon, because they fall under the “kafala,” or sponsorship, system, which is not regulated by labor law. Some of them, therefore, perhaps unsurprisingly, are subjected to untold abuse.

A 2010 Human Rights Watch (HRW) report explained, “The domestic worker sector is rife with complaints of nonpayment of wages, excessive working hours, forced confinement, and even physical and sexual abuse — fueled by Lebanese labor law that excludes MDWs [Migrant Domestic Workers] from standard labor protections afforded to almost all other categories of workers, such as the right to a weekly day of rest, paid leave, benefits, and worker compensation.”

As a consequence, as documented in 2008 by HRW, one domestic worker dies per week by trying to escape, by killing themselves or after being beaten. On June 5, an Ethiopian domestic worker committed suicide in Marjayoun, in the south, and another died trying to escape her sponsor via a seventh-floor balcony in Sin el Fil, a northern suburb of Beirut.

With the help of an international team of volunteer translators and editors, Uprety launched This Is Lebanon to denounce abusive work conditions and living arrangements and to provide a platform for domestic workers in Lebanon and their families to speak out. “My wife and I were involved in helping Nepali domestic workers when we lived in Lebanon, and when we had the opportunity to emigrate to Canada, we vowed that we would continue the fight for their rights,” Uprety told Al-Monitor.

“We have not just ‘moved on’ and forgotten all the abuse that we witnessed there,” he continued. “I, myself, was a victim of injustice and spent five months in a Lebanese prison although the real criminal was my sponsor, who absconded with the money I gave him to renew my papers. I was also subjected to police brutality. In my volunteer work for the Nepali consulate, I saw abuse that would make you weep. I have not forgotten.”

The first story Uprety published, in late May, was about a Lebanese man called Joe Semaan, who raped and stole from migrant workers while pretending to be a policeman. The story got almost 20,000 views along with comments, including by Semaan's former victims, like Angela, who wrote:

Then he told me, see I didn’t find any passport or Iqama [residency permit] in your bag. I am a police[man] and I am going to bring you to the station now. So I started crying and begging him not to do so. So he told me, ok I will not do that but you have to agree to have sex with me. And that time too we were going down dark streets.

He told me you can start now, transfer [to] the front seat and start by giving me a blow job. I refused, so he pushed his seat backward and started grabbing, fondling me with one hand while the other hand is on the steering wheel.

The story forced authorities to respond. They found Joe and took him into custody for interrogation.

“Go to any call center on a Sunday, show the workers Joe's picture and you will very quickly meet one of his victims,” Uprety said. “Some of them met with a human rights' lawyer, but found they could do nothing to stop him, because, being undocumented, they were too afraid to lodge an official complaint. This is how he managed to continue his dirty business for so many years. … That's why we decided to run his story.”

Uprety further stated, “The main reaction [to the website] is one of amazement that there might actually be justice for domestic workers in Lebanon. … [Joe's] arrest was temporary. His Facebook page is now up again, so he is obviously out and free. But the huge number of shares of the post ensured a speedy response from the authorities. Of course, none of his victims is prepared to lodge an official complaint, so they couldn't hold him. The women all feared that when he got out, he would come after them. And, of course, they feared deportation. But the pic of him in handcuffs was a little bit of sweet justice for his many victims.”

The aim of This Is Lebanon is first to name and shame. “There is a sense of impunity in Lebanon,” Uprety said. “You can do whatever you want to your domestic worker and get away with it. Well, not anymore. We want those who abuse domestic workers to know that their abuses will not be hidden, that when she goes home, she now has a way of telling people what she suffered. Lebanon is a ‘shame culture.’ People really care about their reputation. Maybe if they know their worker can expose their dirty secrets, they will be less likely to abuse her.”

Uprety's take on Lebanese society is one shared by Farah Salka, the executive director of the Anti-Racism Movement. “International shaming is the only thing working in Lebanon, because people only care about their reputation,” she told Al-Monitor. “Lebanese people don’t see domestic workers as people, even people who don’t think they are racist. But this country couldn’t function a day without them and in return, we are so ungrateful.”

On the reasons behind the abuse of domestic workers, Salka cited “the sponsorship system, the lack of legal protection and pure racism, against everybody. She added, “Domestic workers are at the bottom at the chain. We are known internationally for our racism, but still, people here don’t understand the problem. And I am talking about my family, my friends, myself before. … It is to such an extent [to include] violence and discrimination.”

For the anti-racism activist, associations and volunteers alone are not enough to change the situation. “We need to have on our side the media, judges, teachers, policymakers and many others to have a real impact,” Salka asserted. “We need support from the public.”

At the end of the day, naming, blaming, shaming and trying to change the situation have a common goal — reform of the kafala system to protect domestic and migrant workers. For the moment, no concrete steps have been taken in that direction.