Israel seems fine with Saudi Arabia getting an anti-ballistic missile system, as does Capitol Hill. 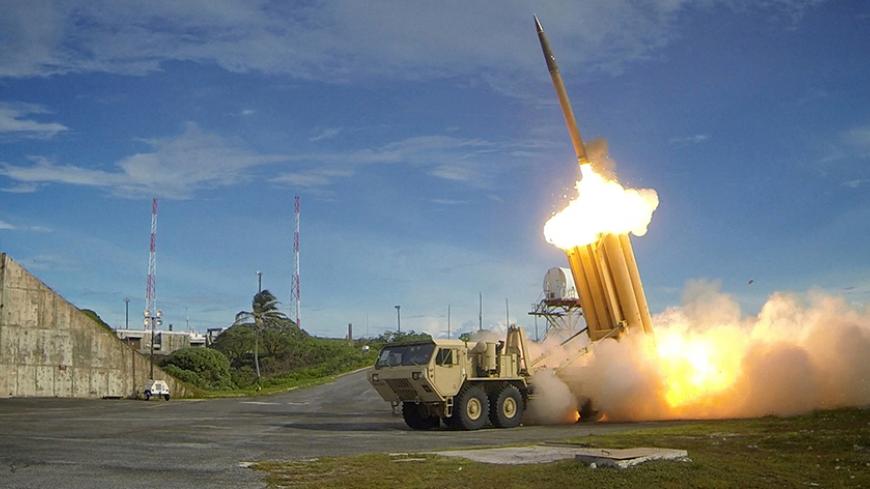 A Terminal High Altitude Area Defense (THAAD) interceptor is launched during a successful intercept test, in this undated handout photo. - US Department of Defense, Missile Defense Agency/Handout via Reuters/File Photo

The Donald Trump administration’s interest in selling an advanced anti-missile system to Saudi Arabia is expected to easily clear Congress in a sign of warming Arab-Israeli ties.

Israel is not objecting to the proposed sale of the Terminal High Altitude Area Defense (THAAD) anti-ballistic missile system, according to several Washington sources, assuaging US lawmakers’ concerns that Israel retain the upper hand when it comes to weapons technology. The apparent approval is but the latest example of Israel and Saudi Arabia's cementing their tacit front against Iran as Trump prepares to visit both countries later this month.

"Certainly the relationship has gotten better,” said Sen. James Risch, R-Idaho, the chairman of the Senate Foreign Relations Committee's Middle East panel. “In addition to that, arms sales to various countries in the Middle East are dicey at best and as a result, they're not done in a vacuum. There's usually considerable consultation all the way around with allies."

Sen. Ben Cardin, D-Md., the top Democrat on the full committee, confirmed that the Israelis are well aware of the THAAD proposal. The Israeli Embassy in Washington did not return requests for comment.

“I’ve raised that issue with the administration, and they say they are in conversations with the Israelis. So we’ll see how that went,” Cardin told Al-Monitor. “I’ve raised the concern generally on Saudi sales because we anticipate there’s more in the works.”

Many arms sales to the Middle East are required to go through a complex process to ensure that Israel preserves what is known as its Qualitative Military Edge, a decades-old US custom that wasn't codified until 2008. The idea dates to Israel’s early wars with its Arab neighbors, when superior military equipment helped the tiny nation prevail over its much larger enemies.

The predicted smooth sailing for the anti-missile system stands in contrast with several past big-ticket sales to Saudi Arabia. Israel notably objected when President Ronald Reagan sold the Saudis AWACS reconnaissance planes, costing him support among American Jews; more recently, Israel extracted a promise to be the only non-NATO Middle East nation to receive F-35s after President George W. Bush ramped up arms sales to Gulf nations in 2007 amid rising Iranian influence.

"I think the Israelis realize at this point that the Iranians are the Saudis' main focus," said Patrick Megahan, the editor of the nonprofit Foundation for Defense of Democracies' Military Edge project, which tracks the balance of forces in the Middle East and how it impacts Israel's Qualitative Military Edge. “[US Joint Chiefs of Staff Chairman Joseph] Dunford was just there in Israel and [Defense Secretary James] Mattis was there not long ago either. If the White House was about to approve them, I'm sure in those meetings it was discussed."

Megahan said THAAD is a high-altitude system that would not be a threat to the kinds of low-flying Israeli planes that would likely be used to attack Saudi Arabia in the unlikely event that war broke out. However, he said, the Israelis could have concerns about the system’s powerful radar, just as China does with the system’s installation in South Korea.

As for THAAD's falling into the wrong hands in case of a regime collapse, Megahan dismissed the risk as remote.

"Even then so much of the American-made equipment is so dependent on American contractors to maintain … that in this instance it's not something the Israelis need to worry about too much," he said. "You're not going to be able to seize it and be able to operate it. It's very complex."

The United Arab Emirates became the first international customer for the system in 2012, just as Iran was threatening to close the strategic Strait of Hormuz and testing ballistic missiles. Initial deliveries didn't take place until late 2015, and the system only became operational last year.

Saudi Arabia's getting the system would be more significant, however, because of its proximity to Israel and its symbolic role as defender of Islam and Muslims, including Palestinians. Riyadh's getting the system could also kick-start efforts to get the Gulf Cooperation Council nations to cooperate on creating a joint missile defense shield, a priority for the Barack Obama administration during the nuclear talks with Iran.

Senate Armed Services Chairman and prominent Iran hawk John McCain, R-Ariz., for one, is ready to move forward with the sale.