Egyptian society is warming up to the idea of women getting fit through pole dancing. 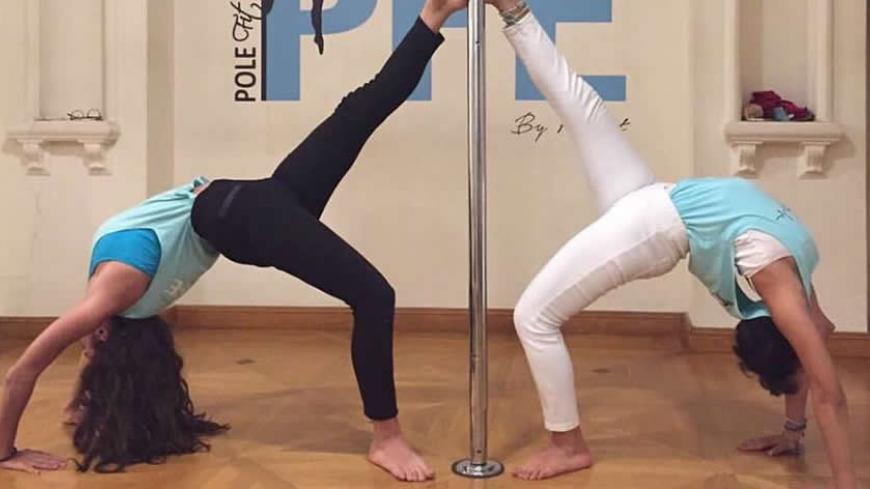 Pole dancing is gaining popularity among women who want to get fit through dance and acrobatics. In societies in the Middle East, however, joining a pole dancing class is still not something that is seen as an appropriate form of exercise for females. Nevertheless, some pole fitness studios have been opening in Egypt.

Manar El Mokadem, aka Mint, studied architecture in the United Kingdom, where she took part in various university student activities. She joined a pole dancing class, and so the idea of bringing this form of exercise to her homeland was born. She says she opened Pole Fit Egypt in Cairo in October 2013, and also has introduced aerial arts to Egypt.

"Once I joined the pole fitness class [in the United Kingdom], I got addicted to it and I decided to turn my obsession into business. When I moved back home, I brought my passion for this workout with me. I then opened my own studio, and I am very proud that I introduced pole fitness to my country," El Mokadem said.

Initially, El Mokadem wanted to share her love of this form of workout with her close friends, and through word of mouth her classes filled up gradually.

She noted, "I had strict rules and this is the secret of my studio's success. It is a female-only studio, as I do not want to challenge traditions." She said in doing so she merely wants to create a safe space that respects Egypt's culture and traditions. "Therefore, my family was very supportive," she said.

She said, "I am happy; it is growing rapidly. We now have four studios and so far we have trained nearly 2,500 girls. There are no body shape requirements; the workout relies on the harmony and coordination between the body and the mind."

In February 2015, another studio opened in Cairo. Spin Egypt was established by Noura Omran and Hadeer Hamed, who learned the fundamentals of pole fitness in London.

"Unlike other traditional types of workout, pole fitness helps you become familiar with your body. Besides a plethora of physical benefits, you will discover that your body can do more than you could imagine. Overweight women can do moves that fit girls cannot do. Each move relies on flexibility," Omran, who wears a hijab, said enthusiastically.

Omran, who has a degree in business management, said neither her headscarf nor her family impeded her. "In London, pole fitness classes are mixed gender. I told them that I want to practice pole dancing before the guys arrive and they were very helpful. Sometimes, they even canceled classes to give me the chance to practice," she said.

"I was 21 when I first practiced pole fitness. There are no age limits or physical requirements; we train a 7-year-old girl just like a 45-year-old woman," Omran added. "Pole fitness has no limits and the moves are endless. I am still learning new moves."

To address the misconceptions attached to pole fitness, Omran said, "In many classes, girls bring their mothers so they can see how this workout can release stress, strengthen the muscles and above all make girls more confident."

The reactions of Hamed's family were not as supportive. "My father was against it since Egyptians have a different mindset and do not accept this type of workout," Hamed said.

Hamed noted, however, that society's attitude toward pole fitness is changing. "These days you can find many pole fitness studios and Egyptians have become familiar with this workout. In 2015, when we started our classes, it was not that easy. Surely, it is a slow change, but we notice the difference."

Omran added that when Spin Egypt opened two years ago, some young women asked her not to tell their families or friends, since it was still considered a taboo. She said, "But now we work six days a week and most of our classes are fully booked because pole fitness has become more acceptable here."

Omran said safety is a top priority: "We teach the girls the movements and how to avoid injuries. Girls who have taken ballet or gymnastics classes are more flexible and learn very fast."

Pole Fit Egypt is preparing to take part in the first international pole fitness competition in Egypt. "It is scheduled for September. We want to spread awareness through this competition, and so we invite people to come and see this form of fitness art," El Mokadem said.