A new mobile application aimed at collecting and recycling e-waste may face obstacles in Egypt because of a lack of awareness about the importance of recycling and protecting the environment. 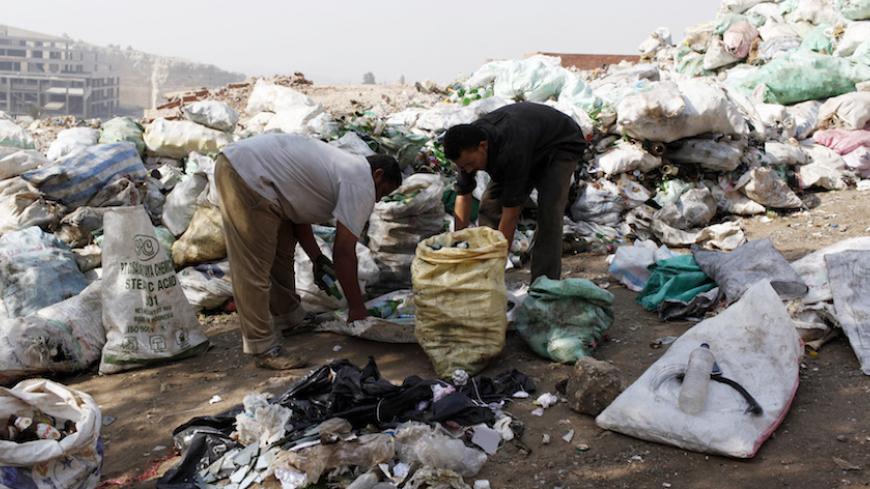 Men look through rubbish in a garbage dump in Zabbaleen in Cairo, Oct. 11, 2012. - REUTERS/Asmaa Waguih

CAIRO — Dr. WEEE is a company that recycles electronic waste using a mobile app for e-waste collection. On March 1, Egyptian entrepreneur Essam Hashem launched the app, which could substantially raise awareness of electronic waste in Egypt. He called his character “Dr. WEEE,” as "WEEE" is the internationally recognized acronym for Waste of Electrical and Electronic Equipment, which includes cellphones, computers, chargers and batteries.

Hashem told Al-Monitor, “Dr. WEEE is a fictive character who solves e-waste problems. It provides a solution to waste known [in Egypt] as Robabekia. The Robabekia sellers collect old, used and unwanted items from households and factories to extract precious raw materials.”

He said, “Disposal of scrap metals pollutes the environment, as some of the waste components are incinerated. Heavy metals such as copper and platinum are being wasted since scrap traders or Robabekia sellers are unaware of their real value."

Hashem seeks to collect e-waste produced by households, companies, universities and schools to ensure a safe way to dispose of them and to extract precious raw materials.

“This is achieved through an awareness campaign on the importance of e-waste targeting universities and schools, and encouraging them to have an e-waste bin and use the Dr. WEEE app,” he said.

Hashem noted that the application can be downloaded on any cellphone and gives money to users who help the company collect e-waste.

He added, “Sorting e-waste from government offices to extract raw materials is one of our company’s objectives, in addition to improving the Egyptian economy by providing many job opportunities for young people.”

Hashem noted, “In addition to Dr. WEEE’s logistical challenges for the provision of e-waste collection vehicles, the main challenge is that society sees recycling as a luxury,” adding that to overcome these challenges and make Dr. WEEE a success it is important to obtain financing from investors — whether from Egypt or abroad.

A United Nations report issued in 2014 ranked Egypt as a top African country with the highest e-waste generation in absolute quantities estimated at 37 million tons. This quantity is likely to increase due to continuous technological development.

However, e-waste recycling is not new to Egypt. This issue has been gaining attention since 2013, when the International Technology Group (ITG) opened a factory for the recycling of electronic waste to make good use of Egypt's e-waste.

However, e-waste management techniques have yet to cover’s Egypt’s overall generated e-waste.

Khalid Ibrahim, the chairman of ITG, said in a press statement in April 2015 that only 20% of e-waste is being recycled, which means that more attention is needed from the government and citizens on this issue.

Adel Abdel Sadek, the head of the Arab Center for Cyberspace Research (ACCR), told Al-Monitor, “This initiative is different since it aims to collect, recycle and re-manufacture e-waste using a mobile application. It also improves contact and communication between those in charge of the initiative and individual consumers.”

He said, “It is necessary to raise awareness on e-waste risks and strengthen the role of civil society and the media in this respect. In addition to disposing, in a safe way, of e-waste that is harmful to the environment and human health, this initiative should be used to create job opportunities and train young workers in the maintenance field.”

Sadek added, “It is important to familiarize the initiative’s targeted audience of its definition and goals, and ensure support from government agencies concerned with the environment and health. The support of any other government agency would be a valuable addition to this initiative."

He continued, “The initiative promotes networking opportunities with foreign parties to share experience in handling e-waste. It is highly important for these new initiatives in the fields of environment and industry to be connected to businessmen and investors.”

In July 2015, the ACCR had launched an initiative through its electronic platforms aimed to promote Arab cultural content related to e-waste, its impact on the environment and potential economic opportunities ensuing from its recycling.

Mohammed Naji, a lawyer and director of the Habi Center for Environmental Rights, told Al-Monitor there is no legislation tackling the problem of e-waste, which is not getting sufficient government attention.

Naji, who is seeking to suggest draft laws on the preservation of the environment to parliament, said he has never before tackled the e-waste problem. But he pointed to the importance of moving in this direction. “I am preparing these draft laws in light of the environmental risks posed by the lack of a safe way of disposing of e-waste,” he said.

Naji does not expect the government to deal with such drafts seriously, and he pointed to the failure to implement environmental protection laws in general.