Egypt now has four blind soccer teams (the goalies are sighted) and plans to participate in the 2017 IBSA Blind Football African Cup in Cape Verde in October. 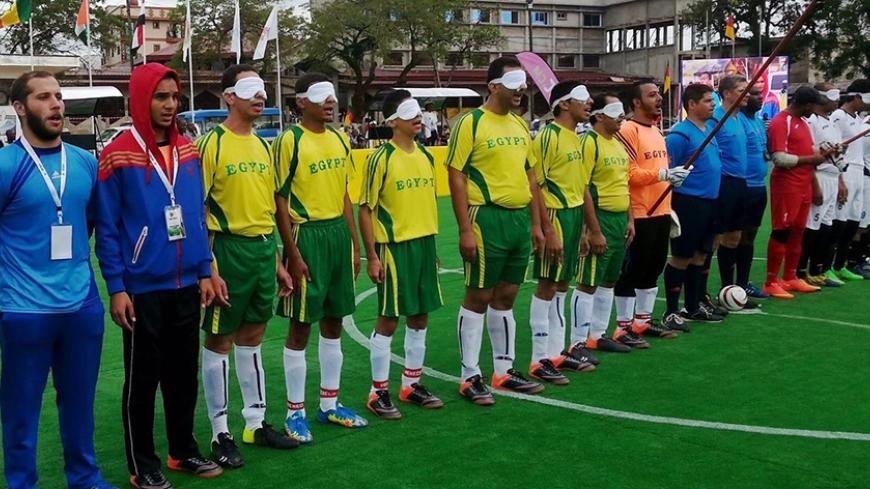 Egypt's blind soccer team takes part in a match in this image uploaded on Nov. 2, 2015. - Facebook/blindfootballegypt

When Ali Abul Nasr returned to Egypt in 2013 after completing his studies in sports management at the University of Abertay in Dundee, Scotland, he decided to put together the country’s first national blind soccer team. One of the courses he had taken was on sports for persons with disabilities, and Abul Nasr wanted to put what he had learned into practice.

Having a younger sister who was visually impaired as an infant opened Abul Nasr’s eyes early on to the hardships suffered by people with vision loss, including facing stigma and discrimination. This prompted him to advocate for equal opportunity programs and policies that would empower people with disabilities, allowing them to lead happier, more fulfilling lives. According to him, his idea of assembling a blind soccer squad stemmed from his conviction that “promoting the inclusion of the blind and visually impaired in sport would pave the way for their inclusion in the society.”

In a country where people with disabilities live on the margins of society, putting his idea into practice was no easy task. It took many months of dedication, hard work and persistent coaxing to win converts to the cause. Three years on, Egypt’s blind and visually impaired citizens (estimated by the World Health Organization at 1 million blind and 3 million visually impaired), finally have the opportunity to participate in the sport that, though widely popular in the country, had hitherto been inaccessible to them.

“Participation in the sport has boosted the players’ self-confidence; more importantly, it is helping transform public perceptions of people with disabilities, improving their standing in the community,” Abul Nasr told Al-Monitor.

Abbas Shoaf, 33, who joined the team two years ago as one of its defensive players, described the experience as “life-changing.” He told Al-Monitor, “Being part of the team has improved my communication and has given me a sense of belonging."

Shoaf has always loved soccer, and as a child he would stay after school hours to play, using a ball wrapped in a plastic bag.

“The rustling sound allowed me to locate the ball as it moved,” he said, adding that he would rush home to listen to live broadcasts of soccer matches on the radio or TV as it was his dream to be part of a professional team.

In 2014, Abul Nasr teamed up with Abdallah Emad, a former classmate who shared his passion for making a positive impact in the society, to start a sports management company. Their first task was to organize a series of fundraising events to raise money to purchase the equipment and gear needed for the game.

“While we fell short of our fundraising goal, the campaign helped raise awareness about the new sport and the need to integrate people with disabilities into the mainstream,” said Abul Nasr.

Abul Nasr, who is currently the team's coach, had to dig into his own savings to buy much of the equipment, which was rather costly as it was unavailable in Egypt and had to be imported.

They had almost given up on the project when they eventually managed to find a sponsor who could help sustain the training program for the newly formed team. Even then, persuading the players to commit to the training plan proved a challenge, as several of them lived in the provinces outside of Cairo and had to commute a long distance to attend the biweekly soccer practice. Abul Nasr also had difficulty finding volunteer coaches and referees who, once recruited, had to undergo training to be familiarized with the rules of blind soccer.

Despite the many hurdles, including a fallout with the first sponsor, Abul Nasr’s team has already competed internationally, representing Egypt in the 2015 IBSA Blind Football African Cup of Nations held in Douala, Cameroon. While the team lost the games, the international exposure has given the players added impetus to continue what they have started.

Shortly after their return home, Abul Nasr began scouting for other blind soccer teams to compete at the national level with the one he had assembled.

“Competition is important to motivate the team and improve the performance of the players,” he said.

With the help of the Egyptian Blind Sports Association, the official body supporting blind athletes, Egypt’s first national blind soccer league competition was held in November, pitting four teams (including the two teams assembled by Abul Nasr) against each other for their debut league title. The players have since been training vigorously with an eye on winning the 2017 IBSA Blind Football African Cup in the championships that will take place in Cape Verde in October.

While blind soccer is as intense and fast-paced as the game played by sighted teams, various adaptations (including modifications to the equipment, the field and the number of players) have made the game suitable for the blind and partially sighted.

“The blind soccer team is made up of four blind or partially sighted players and one sighted goalkeeper, so five players all in all instead of the usual 11. Other than the goalkeeper, all the players wear eye patches or blindfolds to take account of differing degrees of eyesight,” Abul Nasr explained.

He added that the ball used in the game contains a bell or ball bearings that make a rattling sound when the ball moves, allowing players to determine its location. Concentration is crucial as the players are guided by the voices of the other players as they pass the ball and have to listen for their opponents who call out the word “Voy” when going in for a tackle. The players are directed around the field by a shooting assistant, the goalkeeper and the coach. Moreover, the pitch is flanked by acoustic barriers that create an echo, allowing players to determine their position and locate each other.

“Despite all the precautions taken to prevent collisions between players, the risk of injury is there,” said Ahmed Gamal, one of the two defensive players, who has been with the blind soccer team since June 2015. “Still, it’s a risk worth taking,” he told Al-Monitor, adding that he was proud to be representing Egypt in the African Cup of Nations this year. “Our participation in the African games will give us more exposure and will act as a springboard for our participation in other international championships,” he said.

Team member Sherif Badawy, 31, was less optimistic, citing the lack of state support for the game as “a major hindrance to our advancement.” He told Al-Monitor, “Frankly, I’m disappointed at the lack of interest from officials despite the progress we have made in such a short time. We are not asking for charity nor do we need their sympathy. What we do need are sports facilities that are easy to access and sponsors with a vested interest in the sport to help us succeed.”

Meanwhile, Abul Nasr refuses to let the lack of attention deter him from his goals. He is already making plans to take the sport to other provinces around the country and looks forward to making the league championship a seasonal event. He also hopes that the sport will attract more fans who can see the players as he sees them: professional soccer players with exceptional qualities.