A number of Egyptian psychiatrists have launched an online initiative to help Syrians who are suffering from psychological problems as a result of the ongoing war in their country. 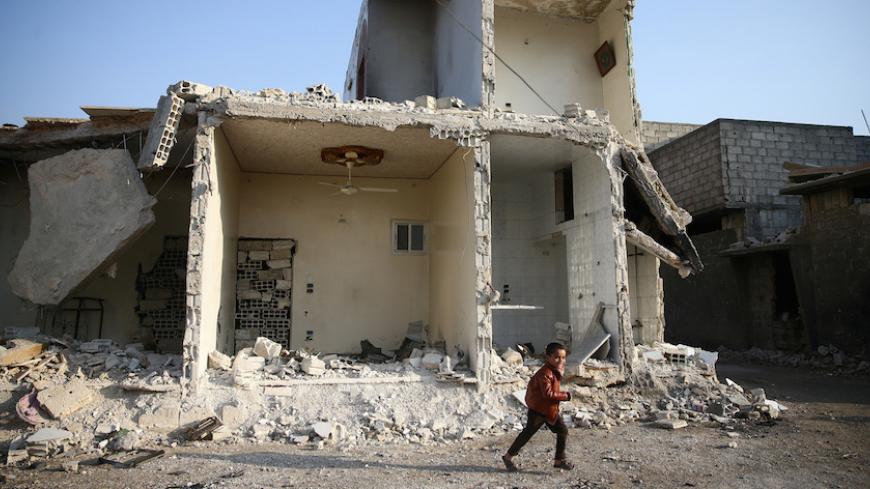 A boy runs near damaged buildings in the rebel-held besieged city of Douma, in the eastern Damascus suburb of Ghouta, Jan. 19, 2017. - REUTERS/Bassam Khabieh

CAIRO — Syria is witnessing a fierce civil war and massacres that have claimed the lives of so many of its people, such as the Aleppo massacre. The Syrian crisis is not unrelated to civil society in Egypt, as a group of psychotherapists launched on Dec. 14 an initiative to provide free psychotherapy and support sessions online for Syrians affected in war zones. The second phase of the initiative, which entails a new set of sessions, was launched Jan. 10.

Despite the geographic borders, the siege imposed by the Syrian regime and the difficulty of communicating over the internet, more and more Syrians across their country are joining the initiative — surprising even the organizers. Therefore, this initiative sheds light on a new dimension of humanitarian aid for those affected by wars and revolutions.

Ahmed Haroun, a consultant psychiatrist and member of the American Psychology Association, launched the initiative with a number of volunteer psychotherapists to provide psychiatric support to those suffering from post-traumatic stress disorder.

After the Aleppo massacre, Haroun believed it was important to move for solidarity and support of Syrians. “A large number of psychotherapy support teams volunteered in the initiative where Syrians who would like to enjoy the free sessions can register on the initiative’s website, and a volunteer psychotherapist would provide support,” Haroun told Al-Monitor.

Haroun explained that psychotherapy is a cognitive therapy that attempts to change how those who seek help think about reality in a set of sessions that reach up to 20 minutes a session with a psychiatry specialist. “The doctor works on training the patient on mechanisms of overcoming crises and enhancing the patient’s relationships with others,” Haroun said.

Haroun noted the initiative is currently restricted to Syrians inside Syria. However, in time, the initiative might extend to include Iraqis, Yemenis and Libyans. Haroun stressed the importance of therapy to war victims as he said, “The most dangerous mental disturbances are those that occur after a catastrophe or the loss of someone. The exposed person needs a similar shock to reorder their thoughts and continue their life without suffering.”

Concerning Syrians living in Egypt, Haroun said the session membership fees are reduced for those in need and that psychotherapy can be provided for free for those with deteriorating economic conditions. Sessions are free for Syrians inside Syria.

When asked about the biggest challenges the initiative faces, Haroun mentioned the difficulties of “communication over the internet due to weak services in Egypt and Syria.”

Tayseer al-Naggar, the head of the General Union for Syrian Refugees and Development in Egypt, praised the initiative. However, he stated that psychotherapeutic support is only important in the post-war stages. “It makes no sense to treat Syrians and provide them with psychotherapy at the same time the bombing and shelling are still ongoing,” Naggar told Al-Monitor.

He said that a number of nongovernmental organizations (NGOs) in Syria are doing the same thing, though he did not mention which ones. Nevertheless, Naggar said that such NGOs are “unable to reach those who are in need of mental support due to the siege imposed on Syria.”

According to Naggar, the priority right now should be to help Syrians in Egypt, especially children who watched their parents and relatives die before their eyes. “There are children who lost the ability to talk due to the cruelty of what they saw. It is better to build hospitals to treat Syrians currently in Egypt and provide them with physical and psychiatric treatment, rather than go to them inside Syria,” Naggar said.

About 6.3 million people have been displaced and approximately 400,000 people have died since the beginning of the war in 2011. The impact of war includes psychological shocks, a topic of interest to international think tanks such as the Brookings Institution, which indicated that half of the Syrian refugees in Germany suffer from mental illnesses, as 70% of them witnessed incidents of violence.

In this context, Ziad Akl, a psychology researcher at the Al-Ahram Center for Political and Strategic Studies in Cairo, talked to Al-Monitor about the consequences of post-revolutionary trauma, which affects those who participated in political and military operations. Akl believes that revolutions change the way people perceive society, such as Syrians perceiving that the state is no longer an umbrella of safety or protection, but rather a threat to their very existence.

Akl referred to how the Syrian revolution caused mental illnesses, such as chronic depression and not being able to adapt to reality, for a number of Syrians.

Akl also praised the Egyptian initiative that “provides online treatment,” and he stressed how important it is to spread such ideas. “We are still dealing with the Arab Spring focusing excessively on the state, while totally ignoring the individual who is a key player in political and social transformations. Therefore, it is important to focus on the citizen who lives the reality of the Arab Spring,” he noted.

The initiative’s main goal is to offer mental support at a time when Syrian citizens need to vent their frustrations, especially amid the absence of mental health clinics in Syria. It is not surprising that the International Medical Corps proposed that mental/psychological treatment is part of health care. In other words, international and regional efforts in the near future may focus on providing psychological treatment to Syrians who were damaged by the war. However, the Egyptian initiative is going to face more challenges, including the continuous need for financial support, the ability to respond to the many complex problems and the ability to reach children and the elderly, who need more psychological support.