In a patriarchal society such as the Gaza Strip, a group of female first-aid workers created controversy when they headed to a football stadium to help male players. 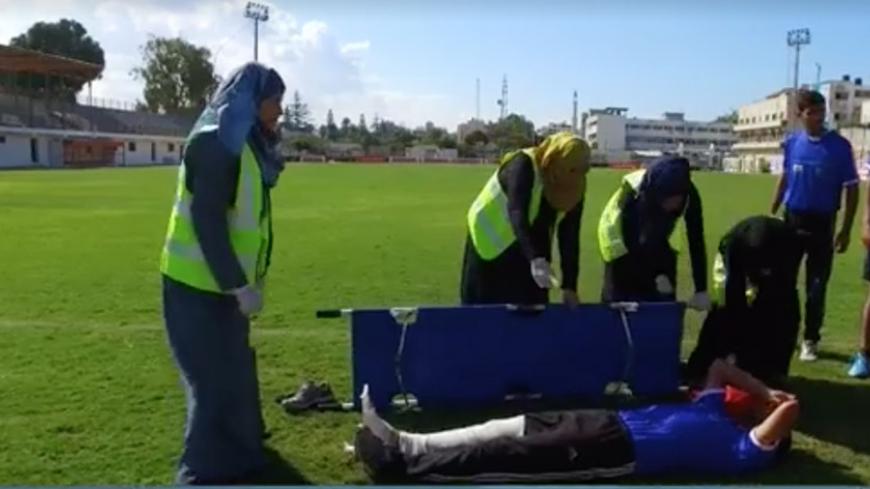 GAZA CITY, Gaza Strip — In an attempt to fight a patriarchal society that keeps hindering their progress in most of the fields they aspire to, Palestinian women are breaking with customs and traditions in a bid to prove that just like men, they have scientific capabilities and technical skills. This was the main incentive that led the Palestinian association of Emergency Medical Services (EMS) to allow female first-aid workers to cover the ongoing football Premier League for the first time,  in a move to challenge society's perception of women's work in general and female first-aid workers in particular.

In this context, the chairman of the board of the Palestinian Association of EMS in the Gaza Strip, Abbas al-Harazin, told Al-Monitor, “We got the idea from the female first-aid workers’ coverage of the Women's World Cup under the age of 17, which was held Sept. 30 at the Jordan university of science and technology, and we executed it out of our belief in the ability of female first-aid workers to deal with all kinds of cases.”

Asked how the idea was executed, ​​Harazin said that the Palestinian Football Association asked the EMS association to provide medical assistance in the Premier League matches in the event players get injured. But the association did not specify the gender of the workers it wanted, thinking that these would be males as per usual.

The football association initially refused the idea, and Harazin said, “The rejection was based on the Palestinian conservative traditions whereby such work would be inappropriate for women and male rescuers should be given priority. However, we managed to convince the association of the idea, and we asked it to give the girls a chance to assess their skills accordingly. The experience started at the end of October.”

Harazin explained that despite the difficult experience they went through, the female workers managed to prove how excellent they were, and this prompted the EMS to replicate this experience throughout the league. He pointed out that three female rescuers have thus far been at the stadium. All three had trained at the association and majored in first aid as an academic field.

Harazin said that society's outlook is limited as it confines women’s presence to specific places, all the while ignoring their ability to carry out a variety of different jobs.

“Women are suffering a lot in a society that is trying to deprive them of everything,” Harazin said.

Muslim said she finds it weird that society believes it is culturally and socially inappropriate for a woman to provide aid to a man and be present in a traditionally male-dominated sport. She pointed out that first-aid workers do not distinguish males from females, or one case from another.

Despite those difficulties, Muslim was able to deal with all the cases that occurred in a very professional way, and she managed to prove her scientific ability and skills. The women have thus far covered around six matches in the league, and everyone eventually praised their work.

She noted that the EMS also had to include male first-aid workers to cover the matches due to the limited number of available female workers. This was also aimed at giving the players the option to choose whom they wanted to be rescued by.

Muslim added, “I do not want to compete with men, but we want to reserve our right to work just like them.”

Muslim said she graduated in 2014 from the department of emergency at Palestine Polytechnic University, which opened its doors for those wishing to get a diploma in this specialization for the first time in 2012. She pointed out that most paramedics working in this field were graduates who received technical medical courses, due to the lack of an academic specialization in first aid at local universities.

Muslim noted that there are no more than 20 women in Gaza in this field due to the conservative customs and traditions of Palestinian society. She hoped that this perception will improve and that more women will join the field and prove their skills.

For her part, rescue officer Hanan Abu Kassim, 28, who graduated with Muslim and shared with her the experience of working at the stadium, said the profession is very difficult to practice in Gaza, adding that the Ministry of Health does not employ females due to social considerations. The concept of first aid, she said, does not exist in the ministry's records, although the Gaza Strip is in dire need thereof — especially in light of the recurrent wars.

She pointed out that the first-aid system as a whole is relying on old equipment due to the lack of faith in the importance of this profession and the lack of an official body concerned with its advancement and development.

Director of the Center for Women's Development Studies Mariam Abou Dakka told Al-Monitor that Palestinian women are trying to fight society's perception by proving their capabilities in all fields. She pointed out that Palestinian society is a patriarchal society that believes that men are better leaders and workers than women, whose physical and mental capabilities do not allow them to work and compete like men.

For her part, feminist researcher Zainab Ghoneimy told Al-Monitor, “The most important obstacles facing Palestinian women's progress are male dominance, narrow-mindedness, as well as the cultural and religious mentality, which still believes that a woman should stay at home.”

Ghoneimy said that women should confront society and show indifference to what people say in order to be able to move forward toward their ambitions.

Abu Kassim had a message to send to all women: “Believe in your goals and seek to achieve them with determination and resolve without listening to people who belittle your abilities.”