As part of fence-mending efforts with Russia, Turkish President Recep Tayyip Erdogan has pledged a special status with huge financial boons for the nuclear plant the Russians are building in Turkey. 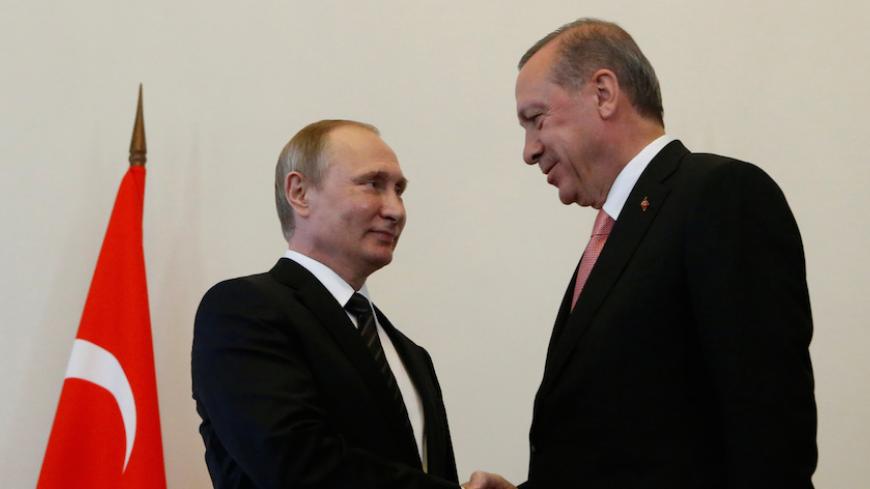 At his fence-mending summit with Russian counterpart Vladimir Putin last week, President Recep Tayyip Erdogan made a multibillion-dollar gesture to help overcome the crisis over Turkey’s downing of a Russian jet in November. The gesture, estimated to be worth no less than $8 billion, concerns the nuclear power plant the Russians are building in Akkuyu, southern Turkey.

Following the Aug. 9 summit in St. Petersburg, Turkish media outlets, especially the pro-government ones, dropped their anti-Russian and anti-Putin rhetoric to celebrate a “great victory” for bilateral ties. Not everyone, however, was euphoric. Hakan Aksay, a veteran Moscow correspondent for the Turkish press, commented that Putin’s trust in Erdogan had been permanently damaged and made the following observation: “In the name of the [Russian] state’s interests, Putin could well start a new 'era of friendship and cooperation' with Erdogan, the man he had accused of 'stabbing him in the back' yesterday. And actually, he did. But he didn’t call Erdogan a 'friend.' Erdogan repeatedly referred to Putin as 'a friend,' 'my dear friend' or 'my dear friend Vladimir' but never got a similar response.”

Both leaders expressed a desire to restore and even elevate the pre-crisis level of bilateral ties. Erdogan reiterated the $100-billion target for bilateral trade. Putin, while making similar statements, spoke of step-by-step efforts over time, said a mid-term plan was to be drawn up for the 2016-19 period and asked for security guarantees for Russian tourists. In other words, Erdogan was saying “Let’s go fast,” to which Putin responded “Hold on, not so fast.”

Erdogan and Turkey have ended up with two big bills to get the normalization process rolling — a material and a moral one. Erdogan’s apology letter to Putin in June was the moral price of making up. In St. Petersburg, Erdogan pledged to pay also a hefty financial price by promising to take the Akkuyu nuclear power plant into the scope of strategic investments, a category that comes with many financial treats. In 2013, when the deal for the plant was signed, the Russians asked for no privileges or special incentives; they only wanted to win the tender. Now, a much weaker Turkey has itself offered privileges on a silver plate to win back Russian hearts.

In remarks to journalists accompanying him on the flight back from Russia, Erdogan outlined an 11-point action plan, in which the “strategic investment” status promised for the Akkuyu plant topped the list.

The plant, the cost of which Erdogan put at $22 billion, will have a capacity of 4,800 megawatts, generating 16% of Turkey’s total power production. Under the build-operate-transfer model employed in the deal, Russia’s state-run nuclear energy giant Rosatom assumed all the investment financing, while Turkey guaranteed to buy all the electricity the plant would produce. Rosatom assumed also the training of the nuclear and physics engineers and the more than 200 other qualified personnel to be employed at the plant.

In the wake of the plane crisis, construction work at Akkuyu switched to an idle mode. Shortly before the crisis, officials had said the first unit would become operational in 2022 instead of 2019 as initially planned, and said $3 billion had been invested in the project.

Speedy regulatory moves are now expected to follow Erdogan’s promise to Putin to meet Russian expectations. The “strategic investment” label would translate into significant financial incentives and support from the Turkish government, compensating for any Russian damages.

According to the Turkish Economy Ministry’s website, the province of Mersin, where the nuclear power plant is being built, lies in Zone 3 in the six zones that Ankara has designated for investment incentives. When it comes to "strategic investments," the ministry offers an ample list of incentives, mostly tax and custom duty exemptions.

Accordingly, the Akkuyu nuclear power plant would be exempt from the 18% value added tax in all investment and operational stages once it officially becomes a “strategic investment.” This means Ankara forfeits revenues of $3.96 billion, the 18% portion of the $22 billion the Russians would invest in the plant. Similarly, all machinery and equipment to be imported for the plant would be exempt from custom duties, barring an $8 billion portion that is to be supplied locally.

The company would be entitled to a 90% discount in corporate taxes during the investment and operational stages. The Turkish treasury would pay for seven years the employer’s share in the social security premiums of all the company’s current and future employees, which are expected to number 15,000 once the project is completed. Rosatom would receive “without charge” the land where the investment is made and other lands that may be needed in the future. The 18% VAT levied on buildings and other structures built on the plant’s premises would be returned to the company.

Another significant form of support pertains to the repayment of loans that Akkuyu Nuclear, the company Rosatom has set up in Turkey, would use for the plant. Accordingly, the Turkish treasury would pay respectively the 5-point and 2-point portions of interest rate payments on loans from Turkish and foreign banks.

Added together, all these incentives and financial supports — i.e., the price of Erdogan’s kiss-and-make-up gesture — would reach roughly $8 billion-$9 billion once the project becomes fully operational.

This comes as a piece of cake for Russia, given the difficulties it has faced in financing the project amid the drop in oil and natural gas prices since the signing of the agreement. With his gesture to Putin, Erdogan is, in fact, foisting almost half the project’s cost on Turkey, atop the guarantee to buy all the electricity the plant would produce.

Russia, for its part, is pledging to respond step by step and over time. With the resumption of charter flights delayed to September or October, the hopes pinned on Russian tourists seem deferred to next year. And if Moscow makes the same security demands it has made to Egypt, this may result in Russian experts inspecting Turkish airports.