Is Turkey swaying back toward Iran?

The recent visits of Turkey’s prime minister to Iran and the Iranian foreign minister to Turkey may indicate a turning point in relations between these two important neighbors. 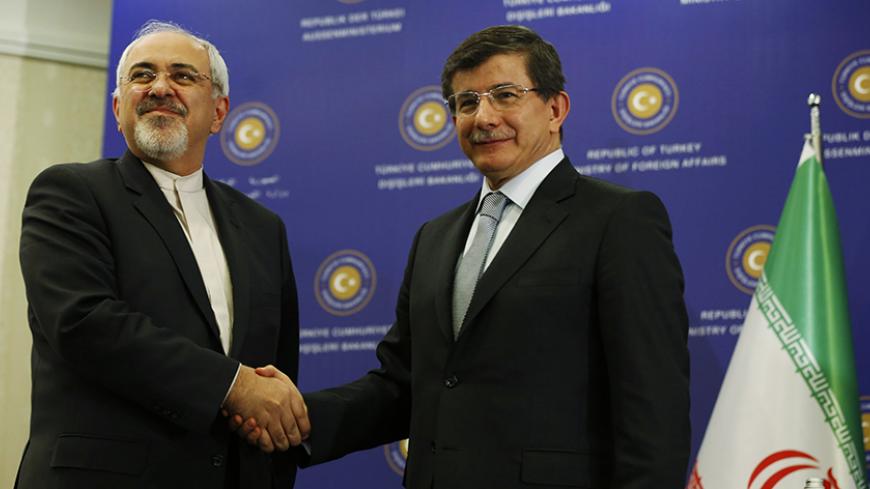 TEHRAN, Iran — The dynamics of the Iran-Turkey relationship are changing. A cursory glance at the Turkish prime minister’s March 4-5 visit to Tehran — including the way he behaved and was treated — gives the impression of a change in tone and intentions. Ahmet Davutoglu headed a major delegation consisting of five ministers and dozens of Turkish companies and businessmen — one of the largest such missions in the past decade. Two weeks later, Iranian Foreign Minister Mohammad Javad Zarif visited Turkey, expressing Tehran’s readiness to enhance economic ties and regional cooperation. The question is whether these visits indicate a turning point in relations between these two important neighbors.

The Arab Spring added new dynamics to Iran-Turkey ties. Prior to the uprisings, the relationship was defined by cooperation — both political and economic — in the absence of ideology. The emergence of the Syrian crisis, however, brought ideology to the forefront. Turkey, feeling the urgency to lead the Muslim Brotherhood’s momentum across the region, reduced its choices to backing the Syrian opposition. Meanwhile, Iran, assessing developments in Syria through the lens of a strategic rivalry that saw its competitors arm a peaceful uprising, clung to the status quo. Iran was preserving its regional influence while Turkey was enhancing its sway.

While politicized and sectarian identities amplified the Islamic State (IS) and its sibling organizations, they also hampered political dealings between Iran and Turkey, leaving their economic cooperation without a political parallel. Five years later, Davutoglu spoke with his Iranian hosts about common ground in Syria. And for the first time, the political elite in Tehran felt a different tone from both Turkish President Recep Tayyip Erdogan and his prime minister. It is worth asking the origin of this change and its causes.

First, there is the economic rationale. Russia’s unilateral sanctions have created an urgent Turkish need to enhance economic relations with other nations — including Iran. Turkey and Iran have had nothing in common in the past five years in terms of their views of regional political developments. However, the Russian embargo has created an incentive to go beyond these political differences. While in Tehran, Davutoglu spoke about the two countries’ agreement to expand bilateral trade to $50 billon a year. In other words, Turkey is seeking to become Iran’s first trade partner.

This enthusiasm is based on a lasting feature of Turkey-Iran relations: the decoupling of economics from politics. Unlike with Russia, the European Union and the United States, economic relations between Tehran and Ankara have never been conditioned on political prerequisites. This tells the elites of both nations that they can pursue their regional policies without jeopardizing economic relations. This is a major factor in favor of the expansion of the economic relationship between the two countries. Additionally, while heading to Tehran, Davutoglu must have had in mind the changing economic atmosphere in Iran and the opportunities after the Jan. 16 "Implementation Day" of the Joint Comprehensive Plan of Action. Yet despite their importance, economic relations alone do not explain such a consequential change in the bilateral relationship.

The second reason for this shift is the fact that unilateral strategic choices have not succeeded on the ground. Neither Turkey’s choice to seek the toppling of Syrian President Bashar al-Assad nor Iran’s policy of restoring stability in a unified Syria has materialized. Yet, Iran’s strategic investment in Syria has proved successful in stopping what Tehran has viewed as a plot against its allies. Meanwhile, Turkey’s investment in arming and supporting the Syrian opposition has not only failed to oust Assad, but also caused security and strategic challenges for itself.

After finding itself up against IS, Turkey’s security has been jeopardized, as seen in the unprecedented bombings on its soil. Ankara’s policies have also led to the empowerment of Syrian Kurds, whom Turkey depicts as terrorists due to their historical affiliation with the Kurdistan Workers Party. Turkey’s strategic choices on the Syrian crisis have opened a Pandora's box whose contents are spilling over into its own territory. Partnering up with Saudi Arabia and Qatar in support of the Syrian opposition has failed to change this strategic impasse for Ankara.

The third reason for the change in Turkey’s tone toward Iran stems from the shifting dynamics of the Syrian crisis after the Russian military intervention, and especially following Turkey’s downing of a Russian fighter jet in November. It is obvious now that the latter was a miscalculation. No matter what Ankara’s reasons for the shooting down of the jet were, it led to Russia’s deployment of the advanced S-400 air defense system on Syrian territory, thereby limiting Turkey’s scope for maneuvering. It also made Russia the second international power, after the United States, to back the Syrian Kurds. This has hit a nerve in Ankara — yet Turkey has not been able to do anything about it.

Thus, scrambling to broaden the spectrum of its strategic choices, Ankara turned to Israel and Saudi Arabia. Yet, it knew that only Iran senses its strategic malaise, especially with regard to the Kurdish issue. This is why Turkey is now finally turning to Iran. What we are witnessing is a tactical modulation of strategic calculations. To be clear, tactical changes, once proven fruitful, can lead to a strategic re-evaluation and maybe reorientation. This is why the Iranians embraced Davutoglu’s new tone and are expected to keep moving on the same track, as indicated by Zarif’s scheduling of his long-awaited trip to Turkey only two weeks after Davutoglu’s visit to Tehran. Zarif’s statements during his visit elucidated Iran’s decision to expand relations with Turkey.

At this stage, both Turkey and Iran comprehend the repercussions of an internationalized Syrian crisis for their own national security. This is why they need to collaborate if there is to be any sort of a regional choice about the internationalized Syrian crisis. They are also expected to stick to the agreed-upon code of their relations: decoupling regional rivalries from bilateral relations. By adhering to this code, they can open different files on different levels to discuss various issues without the risk of negative spillover effects. Moreover, continued Iran-Turkey economic relations, even during the most critical times, illustrate the demise of the all-or-nothing approach so common in Middle Eastern politics in the Iran-Turkey relationship. It also indicates both countries’ abilities to intersect different files, allowing them to do a lot in the face of rising challenges stemming from Syria and the region.