A Kurdish general calls for more ammunition, aid and NATO troops to join the peshmerga in the fight against the Islamic State in Iraqi Kurdistan. 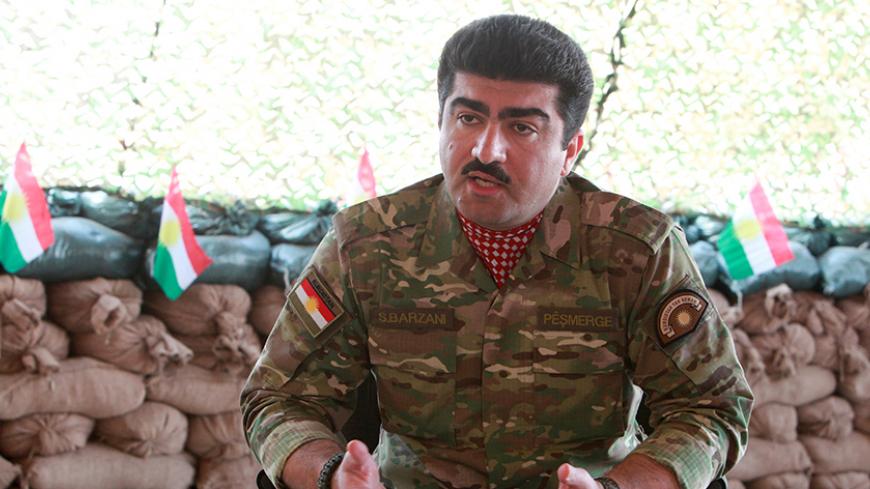 Sirwan Barzani, a nephew of President Massoud Barzani, speaks during an interview with Reuters on the outskirts of Mosul, Jan. 26, 2015. - REUTERS/Azad Lashkari

With the Islamic State (IS) now making direct threats toward the Iraqi Kurdistan Region, and more specifically against its president, Massoud Barzani, what is the situation on the front lines in the fight against the terrorist organization? Al-Monitor spoke with the nephew of Barzani, Gen. Sirwan Barzani, who is now manning part of the front line in the battle against the radical group.

Al-Monitor:  What is the current state of IS? Have the recent offensives launched against the group and the increase in airstrikes significantly weakened it?

Barzani:  Yes, of course. [Yet] while they might be weakened, they still have enough forces to launch attacks. The front lines with IS stretch for more than 3,700 kilometers [2,300 miles] in Iraq, Syria and Kurdistan — our front line is more than 1,000 kilometers [621 miles]. They still rely on suicide bombers and seem to have enough weapons and resources. In the last eight months the situation was calmer, but in the last two weeks in my sector — which is No. 6 — we have been attacked about four times. This might be linked to the bad weather [IS tends to launch attacks during foggy or rainy nights], and it shows they still have the capability to fight. We have also seen more attacks by IS using Katyushas, Dushkas and mortars, nearly every day. When they took over the weapons of the Iraqi army, this gave them enough supply for a period of time. But it has been a year and half since, so the question is: How are they resupplying?

Al-Monitor:  What do you think is necessary to defeat IS? What more can be done?

Barzani:  The peshmerga need more ammunition and weapons. We are getting some aid, but it is insufficient. We have enough fighters so we do not need troops on the ground. [However,] for the Mosul offensive, we will need troops on the ground, because within the Iraqi army there is a problem of loyalty when it comes to the fight against IS. Mosul is a big city and [regaining control of it is] a major [military] challenge. [IS controlling it] also represents a danger for the world. There are many training centers in the city, where children between the ages of 8 and 18 are trained. This constitutes a big threat for everyone. NATO should have troops on the ground or maybe even the Russians. IS captured the weapons of four Iraqi divisions and two police divisions — they have a lot of weapons. We need night vision equipment [for night attacks, which IS relies on] and ammunitions.

Al-Monitor:  It has been said that one problem with the coalition is that it is too risk averse. Do you agree?

Barzani:  Of course, a war with this crazy terror organization cannot be pursued like that. There is a lawyer in the operations room that approves every strike. In September, we found 150 oil trucks [from IS] in Gyarah, but we did not get approval for the strikes because the [Kurdistan Regional Government (KRG)] operating center was afraid of casualties as it considered the truck drivers to be civilians. We have the same problem during attacks: When [IS militants] fire Dushkas from villages [that are known to be empty], the strikes will only target the place from which the shot was fired and in real time. In Gyarah there is a bridge on the Tigris River that was used for logistics [by IS] and the coalition refused to strike it, because it was [also] used by civilians. We also have received information that IS was resorting to two-floor trucks with one floor transporting animals and the lower floor by IS to move from one area to another, but again the coalition has refused to strike such convoys.

Al-Monitor:  There have been reports of many defections by IS members in the Gwer-Makhmour region, the area where you serve as a commander. How are those who surrender to the peshmerga being dealt with?

Barzani:  Yes, it is true. In nearly 20 days in October, over 200 people came into my sector, but they tend to pretend they are regular people or ex-military. We keep them for a few hours to check basic information, then we send them to the Asayish (the Kurdish intelligence services) in Erbil to make sure they are not on any terror list, and they are sent to jail if they are. We know that some people have fought with IS but we cannot prove it; some are defecting because of the growing operations. There are more defections.

Al-Monitor:  Clashes between peshmerga forces and the Popular Mobilization Units were reported in Tuz Khormato on Nov. 12, after a Popular Mobilization Unit vehicle allegedly crossed a Kurdish checkpoint without allowing inspection. What is the general relationship between the peshmerga and the units? Is there any coordination and, if not, would you be open to coordinating with them in the fight against IS?

Barzani:  I do not have any Popular Mobilization Units in my sector as we do not have borders with Shiite communities. They are in Kirkuk. The problem was indeed very bad but a solution was found; I do not know what will happen in the future. Our borders are with Sunnis and we invited their sheikhs — such as the Sabaawi, Loheib and Jubur — to fight with us and offered our support, as we do not want to enter Arab villages. We also got them salaries from [the government in] Baghdad.

Al-Monitor:  On Nov. 13, Kurdish forces — with the backing of fighters from the Kurdistan Workers Party [PKK], the People's Protection Units [YPG] and the Sinjar Alliance, as well as US air support — succeeded in regaining control of Sinjar from IS, more than a year after the group seized the city in August 2014. Why did it take so long to reclaim the city?

Barzani:  The operation was delayed because we wanted to take Mosul before Sinjar, which is a difficult area. We were waiting for the Mosul operation to happen, but the Iraqi army kept postponing it from one month to another. When winter came, we decided that the operation [to reclaim Sinjar] should happen. We now surround Mosul from the east, north and west.

Al-Monitor:  Although IS has been expelled from the city, Sinjar is in ruins and distrust remains between Arabs and Yazidis. Are you aware of any efforts to rebuild the town or repair relationships between these groups?

Barzani:  The problem is very bad. These [communities] were neighbors, some of them living in the same village, and when IS came in, they went and killed these people and took their women. It will not be so easy to restore relations [between them].

Al-Monitor:  Who will ensure security in the city? What will be the role of the KRG there? What about the PKK?

Barzani:  Sinjar wants to be part of the KRG, and the security is 100% handled by the peshmerga. If we push IS completely out of the area, the area will be then controlled by the Asayish, the security forces and of course the peshmerga. I do not really understand the role of the PKK in Sinjar. Are they looking to play a political role in the next elections? That is not the case; it is a show of force. They wanted to show that they played a role in pushing out IS from Sinjar.

Al-Monitor:  How will internal problems within the KRG affect the fight against IS?

Barzani:  There is a political problem, this is true, but this will not affect the fight against IS.

Al-Monitor:  What role do you see for the peshmerga in a possible operation to regain control of Mosul? Could the peshmerga do this without coordinating with Iraqi forces?

Barzani:  We might launch the offense without the Sunnis, but how can we control the area without them? Also, if the local population is not happy with us and helping IS, this will not be easy. We do not yet know what the people in Mosul think, and there is no official plan to take over the city.