The Moroccan government has called for an economic boycott against Sweden for allegedly changing its position to back Western Saharan independence. 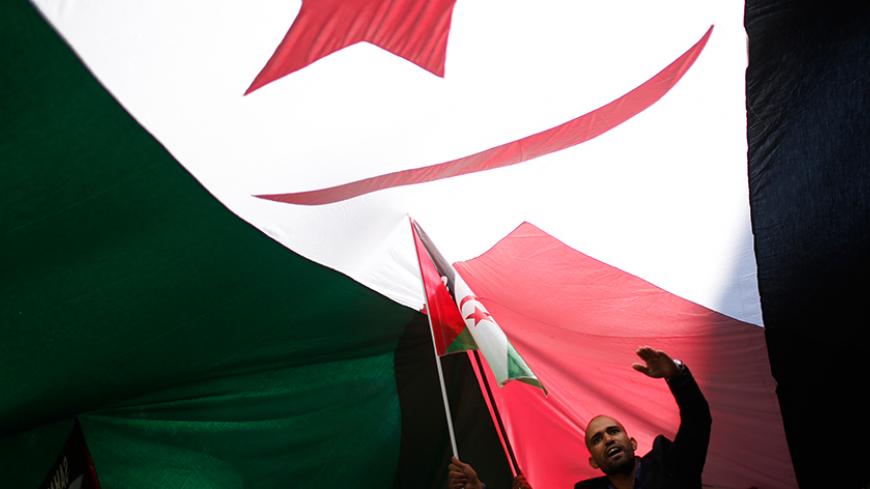 A man takes part in a demonstration in support of Western Sahara's independence, in Madrid, Nov. 16, 2014. - REUTERS/Juan Medina

RABAT, Morocco — The Moroccan government announced a decision Oct. 1 to boycott Swedish companies, crowning a week of diplomatic tensions driven by Moroccan accusations of a change in Sweden's stance on the Western Sahara, where conflict has been ongoing since 1975, when Spain relinquished colonial rule over the territory and Morocco ultimately seized it. The Polisario Front, representing the indigenous Saharawi people, was founded in 1973 and has been fighting for Western Saharan independence from Morocco and for recognition of the Saharan Arab Democratic Republic (SADR). Rabat believes that Sweden, after being neutral on the conflict, is now biased in favor of Western Saharan independence.

According to official Moroccan sources who spoke to Al-Monitor on condition of anonymity, information they had received about the Swedish government’s intention to soon acknowledge an independent Saharan republic was the straw that broke the camel’s back. On Sept. 28, the Royal Palace called on Prime Minister Abdelilah Benkirane to hold an urgent meeting of the leaders from the main political parties and unions to discuss how to politically, diplomatically and economically express the state's displeasure with the Swedes. Later that day, authorities announced the cancellation of the opening of what would have been the first IKEA store in the country, near Mohammedia City.

The issue became a field day for the official, pro-government press, which sharply criticized the Swedish government and the European left in general for their alleged sympathies in favor of Western Sahara's right to self-determination. The Moroccan official news agency, Maghreb Arabe Press (MAP), steadily ran reactions from party activists and Moroccan and foreign policy experts condemning Sweden’s alleged support for a Western Sahara independent of Morocco. Fouad Arif, a correspondent for MAP, described this step as “diplomatic nonsense.”

On Oct. 4, thousands of Moroccans staged a protest in front of the Swedish Embassy in Rabat in response to calls from associations openly affiliated with local authorities. Al-Monitor noticed that many of the demonstrators had arrived from different cities in chartered buses. The official media in Morocco covered the event as a spontaneous public response to Sweden's position, while other news outlets, such as the Swedish Expressen, claimed the protest was directed by the Moroccan government.

The reasons behind Morocco's sudden outrage remain unclear. The Swedish government's stance on the Western Sahara conflict has remained unchanged since December 2012, when the leftist parliament of democrats, socialists, communists and Greens voted in favor of acknowledging the SADR and asked the government to abide with that outcome. Immediately thereafter, the government informed Moroccan authorities that it planned to review its policies vis-a-vis the Western Sahara before making any decision.

Swedish Foreign Ministry spokesperson Pezhman Fivrin told Al-Monitor, “The Swedish government has not taken any decision related to acknowledging the independence of the Western Sahara, and there is no intention to take such a decision. The debate has not been on the government’s agenda, and it is not up for discussion soon. The official stance of the Swedish government in this regard is clear: We are not biased toward any party. We support the efforts of the UN to find a political solution to the conflict, and we have no intention of adopting a new stance. I do not know where the Moroccan officials got their news from, but I can assure you they were misinformed. We only said we would reexamine this issue, and we told Morocco immediately. This is nothing new,” Fivrin said.

Fivrin believes Moroccan authorities might have confused the stances of some Swedish political parties with the official position of the government. He said that Moroccan-Swedish relations are close and must not be allowed to be negatively affected by the current controversy.

On Oct. 4, a left-leaning Moroccan delegation headed to Sweden to present Morocco's perspective to officials and politicians there and to discuss the self-governance initiative that Rabat has been advocating since 2006. The initiative puts forth the idea of a local administrative authority to manage the territory's affairs through legislative, executive and legal committees while remaining under Moroccan sovereignty.

The delegation to Sweden was headed by Nabila Mounib, leader of the Unified Socialist Party (which is not represented in the parliament), and included leaders from the Socialist Union of Popular Forces and the Moroccan Party of Progress and Socialism. The Moroccans met with Swedish Secretary of State Annika Söder and several Swedish parliamentarians.

In an interview with Al-Monitor, Mounib said that the Moroccan stance has always been misunderstood, because handling the issue of Western Sahara has always been monopolized by the political regime. Mounib continued that the state has always appointed figures, institutions or political entities that lack autonomous decision-making and are viewed as biased by the international community to defend Morocco’s initiative.

Mounib, whose appointment to head the delegation was surprising due to tensions between her party and the regime, added, “For others to accept our point of view, we must first build a united community. This can only happen when we reinforce the internal front through encouraging the democratic structure and respecting human rights. I believe the serious parties that are liberated from the logic of affiliations can best defend the national cause and rectify the misconceptions of others on this issue. We cannot keep managing this issue with the same old authoritarian logic. We risk losing a lot this way.”

While some read Morocco's exaggerated expression of anger as a way to pressure Sweden to prevent it from moving in favor of Western Saharan independence, many others believe threatening Sweden with an economic boycott is an ineffective strategy given the relatively small size of Swedish investments in the country. Sweden ranks 44 on the list of Morocco’s trading partners.