Many female soccer players in Palestine are fighting an uphill battle given their towns’ traditions, which discourage women from participating in athletics. 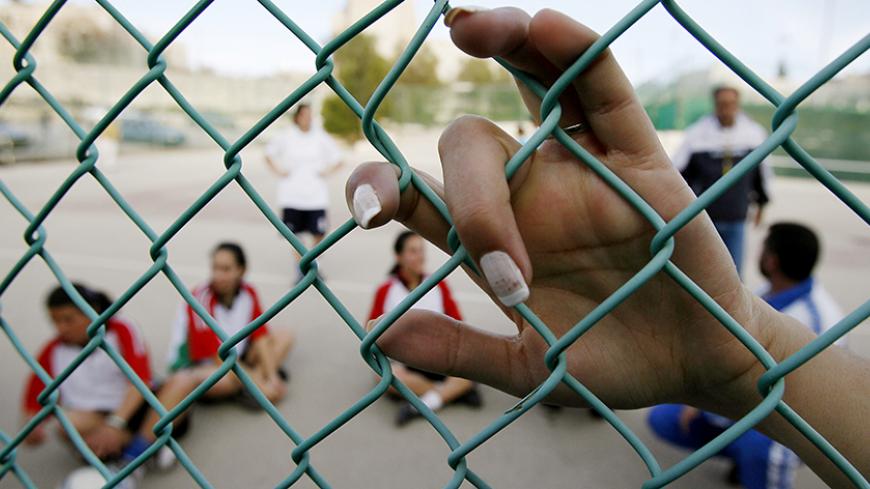 A member of the Palestinian national women's soccer team leans on a fence during a training session in the West Bank town of Bethlehem, Feb. 20, 2007. - REUTERS/Eliana Aponte

RAMALLAH, West Bank — At the age of 18, Mariam Hamdan already has overcome intense pressure and stigma in order to become an advocate for women’s soccer in the West Bank.

“I will never quit playing soccer. A day will come when my daughters and I will play together in the stadium,” Hamdan said as she described her passion for the sport.

Hamdan hails from the village of Dura, north of Ramallah. Her family has pressured her to quit playing soccer, in keeping with the customs of her town, given that she is no longer a child. She has made concessions, such as leaving the high-school team in the past year to please her family. But she still clings to her passion as she seeks to bring about change.

She was recently accepted into medical school in Venezuela. Hamdan said she will soon be traveling to study there, “and I will go back to playing,” assuming her college has a women's team. If not, she will seek to start one.

“I started playing soccer with my brothers when I was little. I remember how I would urge them to let me play in the neighborhood. When I turned 14, it was no longer acceptable for me to play in the street, being a girl.”

So she helped form a girls’ team in her town in 2010. The team fed the dreams of dozens of girls her age or younger in a culture that says girls should not wear shorts, play in stadiums or travel for long periods of time to train.

The idea of the team was also difficult for organizers. Youssef Zaghloul, who coached the town team, fought an uphill battle to establish a way for girls to fit in. “It was an impossible dream,” he said.

Zaghloul said he got the idea of ​​forming a team that girls could be a part of when he noticed a young girl named Dalal skillfully playing with a group of boys. When he asked where she'd learned to play so well, she said she used to play with her brothers and cousins ​​in a nearby neighborhood. Zaghloul wanted to expand the village club to include both sexes, but when he raised the idea with the people in charge of the club, rejection was the name of the game.

“The idea kept occurring to me,” he said, until 2010, when an institution offered training for the boys — provided there were an equal number of girls participating. In a bid to have the idea tolerated by the town residents, Zaghloul chose to have girls selected from the school. He had 25 girls selected between the ages of 8 and 14. Five months later, the team materialized and participated in Palestine’s tournament. They ranked fourth out of 12 teams across the West Bank, and it was the only team representing a Palestinian town.

Since then, the all-girl Dura al-Qar team has been the most active one, despite parents' continued objections. “We faced a lot of difficulties during this period, and they were all related to parents allowing their girls to play with the team. These limitations are not only imposed by the mothers and fathers, but also by brothers and uncles,” and got worse as each girl reached age 14. In such cases, Zaghloul and the team’s administrative body would try desperately to convince the parents to let their girls stay with the team.

Sirin Qasim, 17, is one of those girls whose parents needed a lot of persuading. The coach said she is one of the most talented girls and was among the first selected for the team, joining at age 12.

“Two years ago, my family started imposing constraints on me, first in terms of clothing and then in terms of soccer, especially my father, who faces pressure from the family, but I keep refusing to comply,” Qasim told Al-Monitor.

Qasim will major in public administration at Birzeit University. She said she did not opt for physical education because she “only likes to play soccer as a hobby.” But she said she will never quit, as she strives to continue playing in a bid to coach the team one day.

There are some encouraging signs. The International Federation of Association Football (FIFA) agreed to open a stadium in the town, given the achievements the team made.

“We ranked second on the national level [after only five years], and during the World Cup we represented female soccer within four global teams,” Zaghloul said. Among the girls who participated was Dalal, the little girl in the street who had inspired him to start the team when she was 6.

According to Zaghloul, the team is still struggling with the town's traditions. “We are still suffering from refusal on the part of some town residents who incite against the idea, but given the hard work and achievements of the team, we managed to prove our capabilities.”

He believes the achievements made by Hamdan, Qasim and their friends, as well as their determination to continue, will allow them to preserve the team that introduced their small town to the world.