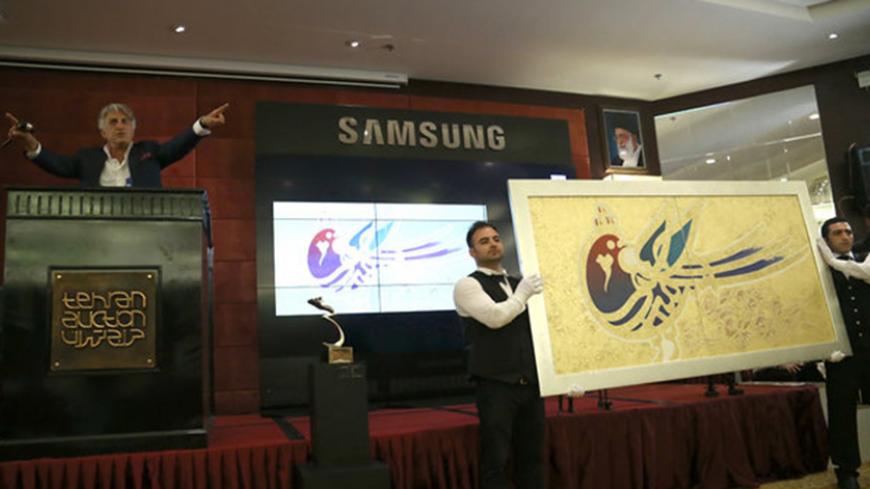 A painting goes up for auction at the Fourth Annual Tehran Artwork Auction in Hotel Parsian, Tehran, May 29, 2015. - Mehr News Agency

On the evening of May 29, the luxurious Hotel Parsian, which belongs to Iran's private Parsian Bank, hosted the Fourth Annual Tehran Artwork Auction. In this auction, 126 works by 109 artists were presented to a group of about 600 people, who bought 84 paintings, 23 calligraphies, 13 statues and six photographs in all. The official website of the Tehran Artwork Auction reports that $6,375,000 worth of artwork was presented.

The auction featured works from deceased contemporary artists such as Kamal al-Molk (Iran’s most famous modern painter), Sohrab Sepehri (poet and painter) and Bahman Mohassess (painter), as well as living artists such as Parviz Tanavoli (sculptor), Abbas Kiarostami (director and photographer) and Parviz Kalantari. The most expensive piece was an untitled painting by Sepehri, sold for $848,000. Another Sepehri painting, “Trunk of the Trees,” sold for $515,000, the second-highest price in the auction.

The dramatic increase in the valuation of this year’s auction over the previous year was welcomed by a large number of famous Iranian artists who believe that when art is sold for high prices, it encourages artists and motivates them to produce better work. “For years, we were missing such a thing in Iran,” wrote Tanavoli in a May 31 column for Shargh newspaper, “In addition to evaluating and pricing the artworks, these auctions also help strengthen the art economy.”

Painter Mohammad Ehsai wrote in a short piece in Shargh, “These auctions make people interested in art. Some people are interested and have the means to buy these art pieces. Now, because of these auctions, they can have access to these pieces of art.”

At the same time, other famous artists, such as Iraj Eskandari and Parvaneh Etemadi (both painters), believe the recent auction was a money laundering opportunity for some buyers and the artists themselves will not gain much from these sales. Eskandari wrote in a Shargh article, “I am not very optimistic regarding the Tehran Artwork Auction. I feel that those who conducted this auction are not doing it to benefit the country’s art industry. It appears as if this auction was only conducted so that a certain group could benefit from it. It was not about the artists or the art economy of Iran.”

According to the Iranian tax law, the trade of artworks is tax free. An Iranian accountant told Al-Monitor, “In fact, buying works of art can lower the buyer’s tax burden. By buying products that are not taxed, the buyer can claim a higher expense and thus pay less taxes.”

Vahid Sharifian, one of the most important artists and agents in Iran, disagrees. The famous sculptor and photographer who has produced numerous art galleries in Iran, Europe and the United States told Al-Monitor in an interview that the amount spent at these auctions is not high enough to be used for tax evasion. He said, “Look, Tehran Auction is not yet at that level, and it cannot be used for money laundering. In fact, none of the artworks produced in Iran are expensive enough to be used for money laundering purposes. Taxes are not that high in Iran anyway. The auction house is charging the buyers the same percentage that they would have had to pay in taxes. Therefore, let's focus on the positive aspects of this auction: investing in art. These extra assets should be invested somewhere. What some people refer to as money laundering, I call good news for the cultural economy of the country.”

However, Sharifian is also critical of the recent auction in Tehran. He believes that only a certain spectrum of the art community in Iran has its fingers on the pulse of these auctions. “The problem is not the auction itself, but the details. For example, personal taste and expertise. When one group is in charge of everything, there can be abuse of power. It is not logical for the experts and the sellers to be the same people. When this happens, any work of art can enter the auction, and it is unfair for the customers who have trusted the expertise of the experts. I am not saying that the current team of experts is completely unreliable; however, I think that this one auction is not enough. If another group enters the game, it would create competition and it will make the process more democratic.”

Alireza Sami Azar, the head of the Tehran Museum of Contemporary Art during Mohammad Khatami’s presidency, is currently the director of the Tehran Artwork Auction. The majority of its supporters are figures who have close ties with the Reformists. Mohammad Beheshti, the head of the Research Institute of the Cultural Heritage Organization; Ahmad Masjed-Jamei, minister of culture and Islamic guidance in the Khatami administration; and Deputy Culture Minister for Artistic Affairs Ali Moradkhani were among the attendees.

A painting collector who lives in Tehran told Al-Monitor on condition of anonymity that the monopoly on evaluating the works of art has resulted in the auction only presenting the works of old or deceased artists. “I know genius young painters in Tehran who have produced breathtaking works of art,” he said. “Why aren’t their paintings presented in these auctions? If the point of these auctions is to motivate our young artists, then where is the work produced by these young artists? The whole situation is really unfortunate.”

The Principlist website Alef, which belongs to Tehran parliamentarian Ahmad Tavakoli, published a report claiming that the art dealers benefited much more from this auction than the artists themselves. It read that dealers buy the works for one-fifth of the artist's asking price and then sell it for twice as much. “Artists don’t know that the whole process is about dealers becoming richer and artists becoming poorer,” the article concluded.

However, Sharifian told Al-Monitor that in spite of all this criticism of the process of evaluating and pricing the artworks, shutting down the auctions is not the answer. “We should not try to shut down these auctions. Rather, we should try to improve them. The field of art needs investment, and we have just started. Even if we view it negatively now, in the future we will see that these types of investments, if done with the aid of sincere experts, will increase the cultural level of the people and the taste of the art enthusiasts.” 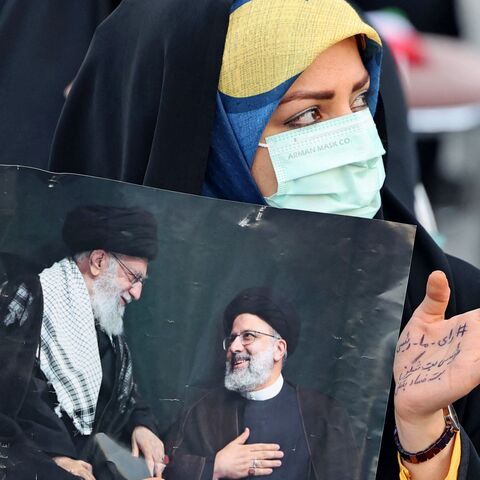