Turkish baths are enjoying a revival among trendy urbanites with modern amenities and services. 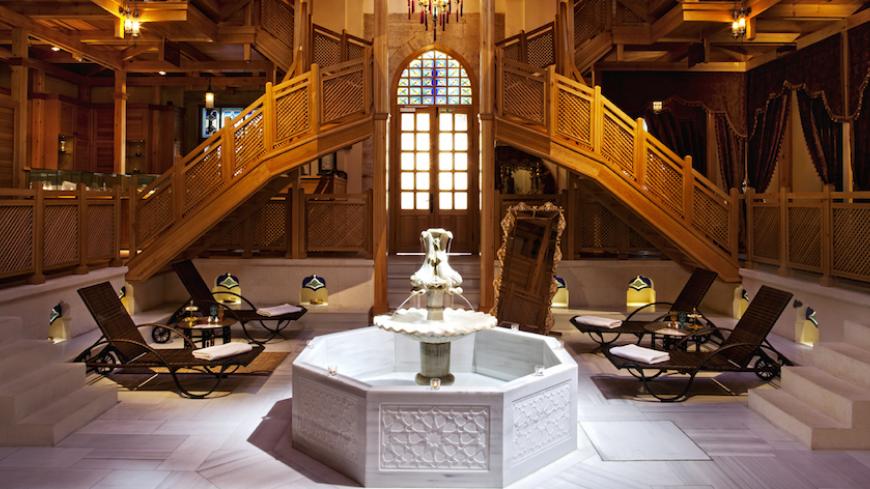 The Turkish media reported May 23 that Madonna is having a Turkish bath, or hamam, built at her new estate. She is not alone in having discovered the hamam. The hamam is the retro-hip hang-out among Turkey's urban and trendy crowds. Turkish hamams have changed quite a bit in the last decade with the revival of all things Ottoman. Most of them are cleaned up and renovated, staying true to the unique traditional hamam architecture and environment.

In the days of the empire, Ottomans built hamams in every town. Some have survived and still function today, such as the famous Veli Bey (or Csaszar Bath) Hamam in Budapest. Up until the 2000s, hamams in Turkey were considered the destination of curious tourists and working-class single men. Now, with their revival, hamams represent a niche for different experiences. You can choose a more relaxing, solitary package with fruit juices and calming tunes, or a girls' day out package featuring shisha, dancing and a variety of food after being scrubbed clean.

Hamams are also a crucial part of Turkey's traditions and celebrations. Before weddings, bridal and bachelor parties host hamam gatherings. Before a man goes off to fulfill his compulsory military service, an event is hosted at the hamam, as is the case when a baby is born. Classy boutique hotels also provide private hamams to their customers.

Turkish baths are different from the well-known Roman baths, mainly because they have running water. Islam praises cleanliness and advises ablution to be performed multiple times a day and on different occasions. Stagnant waters were considered dirty. Therefore, unlike thermal dipping pools, Turkish hamams have always had spigots and running water.

Small towns usually had a single hamam that served men in the early hours of the morning and late in the evening, while women were welcome during the day. As demand has increased, both genders had to be accommodated all day, prompting hamams to construct separate buildings with entrances on opposite ends, so as to assure that neither gender would see the other.

Haghia Sophia Hamam was the first to open to both genders at the same time. Serkan Guler, the hamam's media relations director, told Al-Monitor that the Haghia Sophia Hamam was "built in 1556 by the famous Ottoman architect Mimar Sinan. It was built for Sultan Suleiman the Magnificent’s renowned wife Hurrem Sultan.” Situated between the Haghia Sophia Museum and Sultanahmet Mosque, it provides an exquisite escape after a long day for tourists and locals alike. Shut down in 1910 and reopened to the public in 2008, it has since become Istanbul's most frequented hamam. Visitors can opt for a 35-minute treatment at the hamam or indulge in a two-hour journey.

Once you arrive at the hamam entrance, you will be provided with information on a variety of services. The basic process is as follows: You are given a package with a peshtemal, which is a thin, woven, absorptive cloth. Unlike the cotton towel, it does not get heavy when wet, making it tolerable to wear during bathing. Women wrap the peshtemal around their chests, through their armpits, and men around the waistline. The goodie bag also includes soap, aromatherapy oils, a bath glove used to remove dead skin and a pumice stone for the feet. More elaborate packages for women on special celebrations may include henna and rastik (kohl that is sometimes used as organic dye for eyebrows, hair and even eyeliner).

Guler told Al-Monitor, “The hamam has high ceilings [so] there is light at all hours of the day. Most visitors are pleasantly surprised because it is steamy and warm but not overpowering as a steam room. Everywhere is marble or a kind of stone, and with running water it is highly hygienic.”

You are then guided to a private changing room, where you will return at the end of your hamam journey. Here you are introduced to your “scrubber,” known as tellak for a man and natir for a woman, who will accompany you through your basic hamam experience. The tellak will first guide you to a steam room where you can relax for a while. The tellak, wearing a bath glove, will scrub your body and then, according to one’s wishes, use the pumice stone on your feet. The exfoliating scrub can be rather rough for first-timers, but the post-scrub sensation is heavenly. Next comes a good wash with lots of bubbles, and then a massage. If the customer prefers, he can lay on the heated marble slab over a dry peshtemal for an oil massage that is followed by a rejuvenating cold-water rinse. Most Turkish baths now offer different aromatherapy oils and massage packages, from hot stones to Thai-style. After the massage, you can retreat to the resting area, where guests are offered food and drinks. On the occasion of a special gathering like a bridal shower, food, drinks and music are arranged accordingly in a private section of the hamam. In most hamams, you can even get a manicure, pedicure, facial or shave. If one suffers from heart problems or asthma, the tellaks will recommend low-temperature rooms with only minor sweating.

Gonca Susuz, managing director of Cemberlitas Hamami, another of Mimar Sinan's designs, built in 1584, told Al-Monitor, “Revival of hamam culture is real, [based on] the increasing demand we receive," adding that "along with tourists from all over the world, we have a good local clientele who frequent hamams for health benefits."

Hamams are known to be good for cleansing the skin and rejuvenating circulation. Some women swear by its potent effects on cellulite. Others claim it has psychological benefits through physical detox and the deep relaxation brought by massage, exfoliation and meditation after one's bath. Today’s hamams, just like fancy spas, also sell their own accessories like the peshtemals, special oils and soaps for one to create a mini hamam experience at home.

The most important part of hamam experience, according to Ayse Er, a hamam regular, is “the communal experience.” She said, “Along with all the suggested and proven benefits of a gradual washing ritual, hamams are also great places for entertainment. In the old days when women were not allowed to be in public without male supervision, hamams were the only escape. And today, hamams serve for women and men to enjoy their time together without the iPhones.” Indeed, cellphones are not allowed in hamams. So, for those seeking to unplug from modern-day distractions, hamams are calling your name.