Domestic workers in Lebanon are working together to create a union to push for their rights and thwart potential abuses. 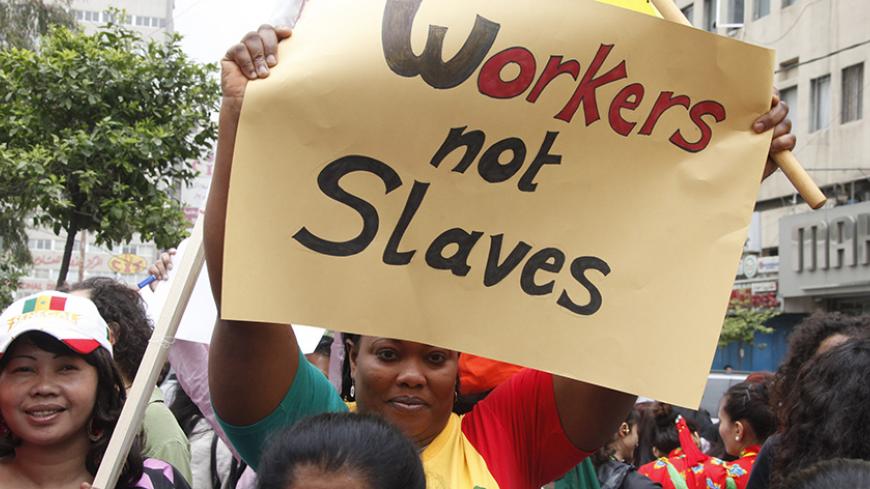 In their fight against abuse and violence, around 200 foreign female domestic workers launched the first domestic workers union of Lebanon, with the help of the Federation of Trade Unions of Workers and Employees Union (FENASOL), an organization that has worked with foreign domestic employees for the past four years to make the government consider their rights. The union is the first of its kind in the Middle East and North Africa, but was still not recognized by the Ministry of Labor two months after its official creation.

The women who pushed for the founding of the domestic workers union can be found outside Beirut. In the gym of the College des Freres Unis school in Salouni, on March 15, well-dressed Sri Lankan women set up their annual Sri Lanka Women Society's Day. Mala, a domestic worker who has been in Lebanon for 33 years, is the organizer of the event, which has today a different feel.

“I'm the vice president of the new workers union and today we celebrate its creation, in addition to our special women's day,” she told Al-Monitor. “With the syndicate, we can now reach more girls and help ourselves. There are too many things to do. We need to talk about safety, working hours … It's human rights.”

In her opinion, “We [domestic workers] help the Lebanese people in the home, and they can help us getting our rights.” Some Filipino workers came to support them on this day of traditional celebrations, as did Gemma, who declared herself “a unionist.”

She worked for 22 years as a maid in Lebanon before deciding to resign and fully dedicate herself to the union. “How can I fight for my rights if I work all the time?” she asked. “Now we are only getting stronger. There is no answer from the government, but we will succeed,” she added before joining the stage and sing the new anthem of foreign workers in Lebanon: “Solidarity forever/The union makes us strong.”

As for now, Labor Minister Sejaan Azzi has not accepted the syndicate to get licensed, nor declared it illegal. In Lebanese law, the matter is not that clear: Article 7 of the Labor Code stresses that construction workers, house workers, peasants, fishermen and family businesses cannot organize themselves, meanwhile Article 92 says that all foreign workers with a license and a visa are allowed to organize themselves.

The problem is that the vast majority of services and home care in Lebanon are carried out by migrant workers, around 200,000 according to the nongovernmental organization Migrant Rights. In 2010, a report issued by Human Rights Watch highlighted the urge to protect foreign workers through tougher legislation.

The following year, the International Labor Organization (ILO), along with FENASOL, asked the Lebanese government to sign the Domestic Workers Convention and Freedom of Association and Protection of the Right to Organise Convention. “Although Lebanon voted in favor of it, it never signed it,” Castro Abdallah, president of FENASOL, told Al-Monitor.

“The government passed the matter on to parliament, but there was never a meeting to answer the case, so it remains postponed. In 2013, in coordination with ILO, we started some programs with migrant workers to build a syndicate. In December 2014, six of them officially asked the labor minister to authorize the creation of the union, a question that remains unanswered.” One major problem is the Kafala system, by which each domestic worker arrives in Lebanon under a sponsor's family, although “this is not even mentioned in the law,” Abdallah said.

The Bangladeshi ambassador to Lebanon told the Daily Star that as for the workers' respective embassies, it seems that they face issues while dealing with the Lebanese authorities when it comes to the workers' rights. Other embassies, such as the Ethiopian one, end up suing for abuse. The Philippine government also issued a law prohibiting employment agencies and employers from charging recruitment fees and making them liable for payment of wages and provision of benefits.

However, the matter is pretty urgent, as stated in a report issued by Kafa in 2014, based on interviews with 100 women from Bangladesh and Nepal. “Most of them didn't have any information on the tasks, the salaries and even the working hours,” Maya Ammar, Kafa's communications officer, said. “They are then very vulnerable, which is for us a case of human trafficking.”

The association joined the cause quickly, giving the migrants space and tools to find a solution, and also supported Nari, a community of Nepalese female activists. “The domestic workers created a network through community events, and the message spread to those who are not allowed to leave their employer's house,” Ammar said.

She added, “But they are still very dependent on their employers, who control every aspect of their life. The problem is mostly based on the sponsorship system that puts the Lebanese families in charge before the authorities of their employee's actions, without mentioning the corruption of the recruitment agencies, the financial investment they engage in and profits they aim to realize. In this situation, the families are often scared that something goes wrong, so they are tough.”

For Ammar, the solution would come “from a stricter surveillance of the [recruitment] agencies, because a legalized relationship would help a lot.” But this is limited because, according to her, “you cannot get rid of racism and abuse against women that easily."

Meanwhile, FENASOL and the union fought and managed to close 12 recruitment agencies that had been the subject of complaints from clients and domestic workers. In only three months, more than 300 women joined the union, but there is still a lot to do. Malika Begum, from Bangladesh, killed herself on March 19 at the house she was working in, after her wish to return home was denied.